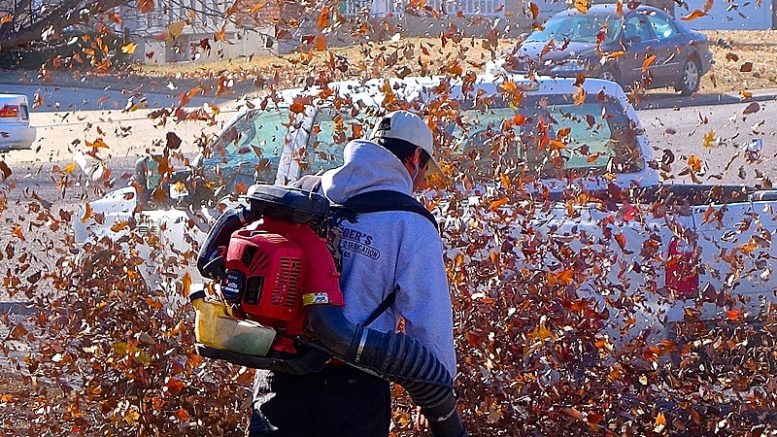 It’s a quiet Saturday afternoon, and after a rough week at work, you’re relaxing at home—reading, playing with the kids, firing up the backyard barbecue.

All of sudden, a loud, jarring whine starts up. And it keeps going.

City officials regularly get noise complaints about leaf blowers. But it may be their public health dangers that end up limiting their use in Sacramento —once the coronavirus pandemic passes, gardeners start working regularly again and life returns to something resembling normalcy.

A proposed ordinance would ban gas and electric leaf blowers when the air quality index is at 100 or higher, which is unhealthy for people with lung diseases, older adults, children and sensitive groups—and which has happened an average of 34 days a year since 2014.

The problem, according to a city staff report, is that leaf blowers emit engine exhaust and blow around dust, which can worsen asthma and other upper respiratory conditions. That poses a short-term risk for residents and others nearby, but can be a longer-term danger for workers who don’t wear adequate protection.

Vice Mayor Jeff Harris, who is pushing this proposal and represents East Sacramento, said the issue hit home when he saw leaf blowers being used even during the Camp Fire in November 2018, when air quality in Sacramento plunged to unhealthy levels for everyone.

Harris said he talked to Alberto Ayala, executive director of the Sacramento Metropolitan Air Quality Management District, and also met with landscape industry people and came up with what he called a compromise—not a total ban, but limits when the air quality is getting bad.

Harris said his goal is not to fine companies, but to change their behavior. “Rakes and shovels still work,” he told the council’s Law and Legislation Committee on Feb. 18.

Several supporters told the committee that the ordinance is needed, pointing out that the Sacramento metro area ranks fifth worst in the nation for ozone pollution, according to the American Lung Association.

While no industry representatives spoke to the committee, gardeners and landscape contractors have told city staff that leaf blowers are much more efficient than rakes and complain the additional time would hurt their bottom lines.

Sacramento is a city of trees, which means we’re a little obsessed with leaves. So it wouldn’t be surprising to see a dust-up on this issue. The proposed ordinance is getting more tinkering before coming back to the committee, which will decide whether to send it to the full City Council for a vote.

Among the issues: How to educate landscapers, especially low-wage workers and immigrants who don’t speak English as their first language? If there is a violation, would the property owner be cited, or the landscape company? And can the city lead by example by replacing its gas-powered leaf blowers with electric models?

Existing city code doesn’t restrict leaf blowers, except based on noise and nuisance. If they’re within 200 feet of a residential property, they can only be used between 9 a.m. and 6 p.m. Monday through Saturday and between 10 a.m. and 4 p.m. on Sundays. There are also decibel limits, but the city says those are rarely enforced because by the time officials respond, the leaf blower is long gone.

We don’t want gardeners to lose their jobs, but public health is important, too. A little more peace and quiet on weekends wouldn’t be so bad, either.

Be the first to comment on "Editor’s note: A big dust-up?"