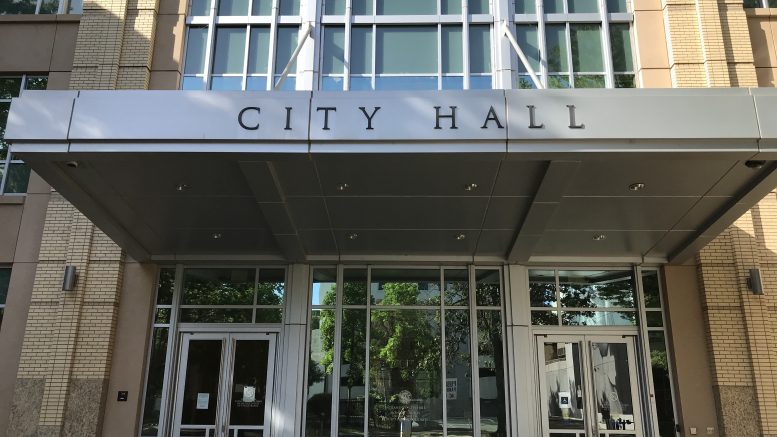 With no meeting this week, the City Council won’t debate police reform again until next week.

Mayor Darrell Steinberg has announced that there will be a special meeting on Wednesday, July 1.

But that just means more time for Black and Brown community leaders to pump up the pressure on Steinberg and council members to go much further than current proposals—and especially to do more to “Defund the Police.”

That public advocacy campaign ramped up on June 19—Juneteenth, commemorating the end of slavery.

The Build.Black coalition, the Black Child Legacy Campaign and others held a mid-day rally to call for reducing police spending to invest more in grassroots community programs. The campaign and its partners are asking the city for $2 million in federal stimulus money for the “Healing the Hood” gun violence prevention program, which they say will build on the record of 28 months as of May without a youth homicide in Sacramento.

“When we talk about defunding police, we’re really talking about investing in community,” Gabby Trejo, executive director of Sacramento Area Congregations Together, said in a statement.

Then in the evening, groups led by Black Justice Sacramento held a press conference, followed by a rally and march, with more radical demands—including a reordering of city spending and a renegotiation of the police union contract—and a more confrontational approach.

Kula Koenig, Sacramento chapter president of Black Women Organized for Political Action, said that the group doesn’t trust Steinberg’s plan for racial justice. She announced that surveys will be circulated on recalling the mayor, who won a second four-year term in March with 77% of the vote.

City Councilwoman-elect Katie Valenzuela agreed that what the mayor is proposing isn’t enough and said that she will hold community meetings and draft a “People’s Budget” to present to the council when she takes office in December.

“When we talk about defunding police, we’re really talking about investing in community.”

Meanwhile, some activists are clamoring for the public to be allowed to talk to the council in person on police reform. Since the COVID-19 lockdown in March, the council has only been accepting electronic comments and phone calls.

As the council met virtually on June 16, Black Lives Matter protestors gathered outside City Hall to demand the in-person meetings. Several council members are also asking the city manager to find a safe way to bring back in-person public comment.

Steinberg and council members aren’t just hearing from activists, however.

Also on June 19, Sacramento Police Chief Daniel Hahn joined seven of the 16 Black police chiefs in California (of about 330 total) to support some limited reforms. At a press conference at the state Capitol, Hahn said the chiefs are dedicated to “real change” and want to help heal communities, while acknowledging that law enforcement has been used to enforce racial injustice.

In terms of specifics, the chiefs said they want the power to fire officers for “egregious use” of excessive force that violates policy or law, with appeals only after the fact, along with more public disclosure of records when officers are dismissed. They also backed expanded training—starting in the academy and throughout officers’ careers—on racial bias and deescalation techniques.

But the chiefs said that defunding police departments is not the answer, though they are open to creating new civilian units to handle non-criminal 911 calls.

That dovetails with one of the two significant changes to policing in Sacramento that Steinberg put forward last week.

Under his plan, a new civilian corps would respond to non-criminal 911 calls, such as those involving mentally ill or homeless individuals. The new team of mental health and social work specialists would be started immediately with $5 million. The city would take 60 days to tally how many 911 calls are non-criminal, and funding equal to that percentage would be shifted from the Police Department to the new unit by July 2022.

The mayor’s second proposal is an independent inspector general to investigate officer-involved shootings and use-of-force incidents that result in death or serious injury. Working out of the city’s Office of Public Safety Accountability, the inspector general could interview witnesses and would determine whether officers violated department policy and whether they should be disciplined or dismissed. The findings would be presented to the public, City Council and the Sacramento Community Police Review Commission before the city manager would decide any discipline.

Steinberg is also under growing pressure on police funding, which is set to rise by about $10 million to $157 million in the 2020-21 fiscal year that starts July 1. Most of that increase is for pay raises negotiated in the union contract and to replace police vehicles.

The portion of the police budget funded by the Measure U sales tax is scheduled to jump from $35.2 million to $41.7 million. That will be about half the total Measure U revenue because sales taxes have plummeted during the COVID-19 business shutdowns.

On June 15, chairperson Flojaune Cofer and several other members of the Measure U Community Advisory Committee called for shifting all $41.7 million from the Police Department to spend on economic development, housing and homelessness. That would amount to nearly a 27% cut to the total police budget.

Steinberg told the committee that since voters approved the expanded Measure U in November 2018, the city has spent or committed $70 million to help disadvantaged neighborhoods and promote inclusive economic development.

But because of the drop in tax revenue during the COVID-19 lockdown, the city needs to use some Measure U money to avoid mass layoffs and cuts in services, he said. He committed to using proceeds from the second half-cent for economic development, youth, workforce training and homelessness and housing—once the economy rebounds.

That may take quite a while. And given the rising pressure, the mayor may not be able to wait that long.

What belongs in Sacramento’s 2020 time capsule?