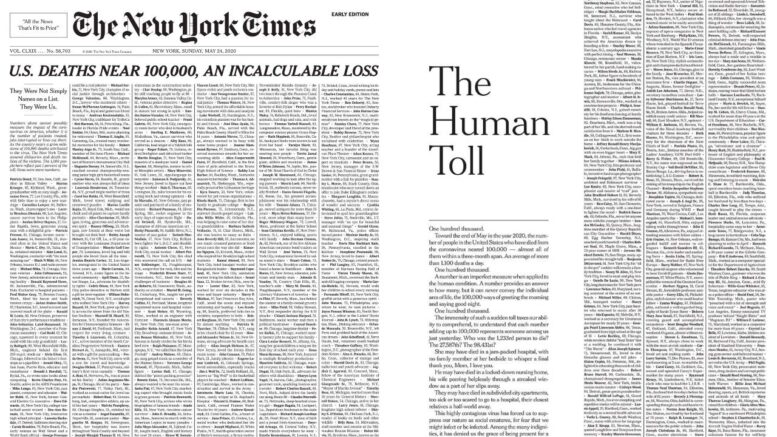 The front page of the New York Times on May 24 marked a milestone in the COVID-19 pandemic.

So why aren’t we a nation more in mourning?

Is it because we have a president who seems incapable of empathy, who brags about what a great job he’s doing–just Monday, he somehow gave himself an A+–and who prefers to celebrate other numbers, such as the stock market?

The national mood would be very different if we had a president who united us in collective grief. Former Vice President Joe Biden said Monday that we can’t let the death toll become mere numbers and tried to remind us that each one is someone’s family member or loved one.

Is it because the pandemic has become so politicized? Polls show that Democrats and Republicans not only disagree on how President Trump is handling the crisis, but also on reopening businesses and wearing masks.

There’s even a partisan divide on the accuracy of the official death count. (The one kept by Johns Hopkins University is widely cited). While some Republicans say the count is being inflated to make Trump look bad, many Democrats believe it’s too low because people are dying without being tested for COVID-19. At the same time, Pew Research Center found that more than 80% of deaths as of May had been in congressional districts represented by Democrats.

Or is it because—to prevent more infections—there have been few public funerals and memorial services? What if TV news shows were featuring weeping families every day? There was a bell toll ceremony at the National Cathedral in Washington, D.C., on Sunday to mark 200,000 lives lost.

Is it because so many Americans have been laid off and suffered economic hardships, many of us are feeling depressed and nearly all of us have had to change our daily lives due to stay-at-home orders? Maybe it’s easier to mourn people we don’t know when we’re not dealing with our own problems. Or as states reopen, maybe people would rather do anything that’s closer to normal, even have fun on the beach.

Or is it because there have been so many deaths over so many days that we’re all just numb to the fact that each number is a real person, with friends, family and loved ones?

The death toll is unrelenting, on cable news screens around the clock, or names filling the entire front page of the New York Times. Maybe the numbers are just too big to wrap our heads around, especially if we don’t personally know someone taken by COVID-19.

It’s a combination of all these reasons, most likely.

Yet, contrast what’s happening now with America’s response after 9/11. The nation was united in its grief, and then its resolve. Nearly 20 years later, still seared in our memories are the solemn ceremonies when the body of a New York firefighter or police officer was carried out of the smoldering ruins of the World Trade Center.

And that was after 3,000 deaths. We nearly had that many in a single day from COVID-19 during the peak in April. The final, terrible death toll could be far higher, especially as states reopened too soon, Trump pushes for schools to hold in-person classes and if there’s a second wave in the fall and winter.

“Maybe the numbers are just too big to wrap our heads around, especially if we don’t personally know someone taken by COVID-19.”

It’s fitting that we reached the terrible 100,000 milestone so close to Memorial Day. Some, including Trump, like to compare the pandemic to a war. If it is, we have only won early battles and still face many more tests to defeat a stubborn and unforgiving enemy. And we have our war dead, even if they’re not buried under rows and rows of white crosses in national cemeteries.

So if we’re not going to mourn them properly, the least we can do is keep a safe distance, wear masks, get tested when necessary, take the vaccine when it’s safe and effective—and do everything we can so all these deaths are not in vain.