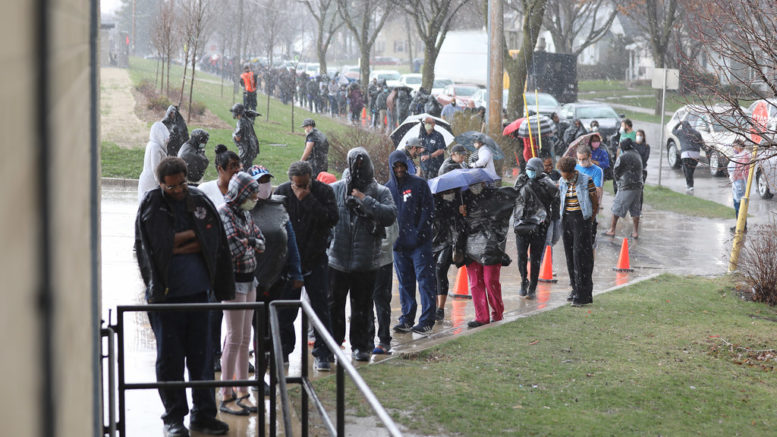 Many voters in Wisconsin waited in long lines to cast ballots in the April 7 primary. (Photo by Coburn Dukehart / Wisconsin Watch)

You probably saw the scenes on April 7 of Wisconsin voters having to wait in line for hours in the middle of a deadly pandemic—an outrageous, and it turns out an unsuccessful, ploy by that state’s Republicans to discourage Democratic voters. The first COVID-19 cases among those voters are starting to be reported.

Many other states delayed their primaries to protect public health during the COVID-19 crisis. It’s entirely possible that voting in person could still be too dangerous in some places in November.

But safer mail balloting across America is not a done deal. Unfortunately, it’s turning into another partisan fight.

California is among the states that had already been moving toward mail-in voting. On May 8, Gov. Gavin Newsom signed an executive order to mail a ballot to all registered voters, 29 days before the Nov. 3 election. California is the first state to make this move, though voters will likely still have the option of voting in person.

When Republican lawmakers went to court to block Newsom’s order, the Democratic-controlled Legislature passed a similar bill, and the governor signed it in June.

“California will not force voters to choose between protecting their health and exercising their right to vote,” Secretary of State Alex Padilla, the state’s chief elections officer, said in a statement.

Sacramento County is one of the first counties in the state to mail ballots to all registered voters, while closing smaller traditional polling places.

A spokeswoman says the county elections office plans to continue pushing voters to put their ballots in the mail or in drop boxes. While plans for the Nov. 3 election “continue to evolve” based on public health guidance, officials are already working on social distancing for in-person voting at busier vote centers.

Yolo County also plans to encourage mail-in voting, including a test of a new feature that lets voters track their ballots. Sacramento County and 24 other California counties already offer the “Where’s my ballot?” tool.

Asked Tuesday on CBS This Morning whether the November election, along with school and sports, would happen as normal, Gov. Gavin Newsom replied: “I think that would be unrealistic to assert…. We’re gonna have new protocols and procedures, temperature checks, people wearing face coverings across the spectrum.”

The League of Women Voters of California has issued recommendations on holding a safe election. It says while all registered voters should get a mail-in ballot, it’s not a solution that works for everyone and could disenfranchise communities of color. So the league also calls for drop boxes and other in-person options.

On Wednesday, the bipartisan U.S. Election Assistance Commission is holding a virtual public hearing for local and state officials to discuss how to administer the election during COVID-19.

“What we saw in Wisconsin should serve as a warning, not a preview of what we’ll see in November.”

On April 17, Padilla joined a conference call on April 17 with Democratic National Committee Chairman Tom Perez and the party chairperson in Colorado, Oregon and Washington state to highlight the history of successful mail balloting and the urgent need for more vote by mail and early voting in November.

“We’re 200 days from the most important presidential election of our lifetime, and nobody should be forced to choose between their health and their right to vote,” Perez said.

“Every state handles elections differently, but in 2020 we have this in common: we cannot allow our democracy to be a casualty in this pandemic,” Padilla tweeted afterward. “What we saw in Wisconsin should serve as a warning, not a preview of what we’ll see in November.”

On April 16, Sen. Kamala Harris of California announced the VoteSafe Act of 2020, which would require states to allow no-excuse mail-in voting and early voting of at least 20 days, and authorize $2.5 billion to expand vote-by-mail and early voting and another $2.5 billion to improve the safety and accessibility of polling places. The bill is endorsed by the American Civil Liberties Union, National Disability Rights Network, Service Employees International Union and other civil rights groups, as well as Padilla.

The $2 trillion coronavirus relief package passed last month included $400 million for elections. House Speaker Nancy Pelosi of San Francisco is trying to add $2 billion to $4 billion in election-related funding in a potential new relief bill that is being hashed out in Congress. But top House Republican Kevin McCarthy of Bakersfield is blocking that effort, accusing Democrats of trying to use the crisis for political gain.

He’s following the lead of President Donald Trump, who even after the Wisconsin debacle put out more misleading claims that widespread mail-in voting is an invitation to fraud and only helps Democrats. “Tremendous potential for voter fraud, and for whatever reason, doesn’t work out well for Republicans,” he tweeted on April 8, even though he cast an absentee ballot himself in his newly adopted home state of Florida in the March 17 primary.

A study released by Stanford University researchers this month concluded, however, that mail voting does not decisively advantage either party. In three states with widespread mail voting—California, Utah and Washington—voter turnout rose slightly but there was “no discernible effect on party vote shares or the partisan share of the electorate.”

And a Reuters/Ipsos poll released this month found that 72% of U.S. adults, including 65% of Republicans, supported a requirement for mail-in ballots to protect voters from the coronavirus.

But if mail-in voting is far more widespread, it’s possible that the winner of the presidential election will not be declared for days, if not weeks, if the race is close. Final results in California are often delayed because ballots postmarked by election day must be counted.

One other point: Some Trump allies have mentioned the prospect of canceling the November election entirely. Rest assured, Congress would have to pass a law to do so. And the Constitution says that the terms of the president and vice president end on Jan. 20 no matter what. But if some states don’t hold an election, it gets really complicated in the electoral college.

Besides the all-important presidential election on Nov. 3, the local ballot will include runoffs for two Sacramento City Council seats and one county Board of Supervisors race, probably a city measure on funding for children’s programs and likely a countywide sales tax increase for transit and roads, plus statewide ballot measures, including another attempt to allow stricter local rent control and a bid to take away Proposition 13 protections from commercial property.

There are a lot of reasons to make sure to vote in November. At least here, you won’t have to risk your health.

Be the first to comment on "Danger zone for voters"