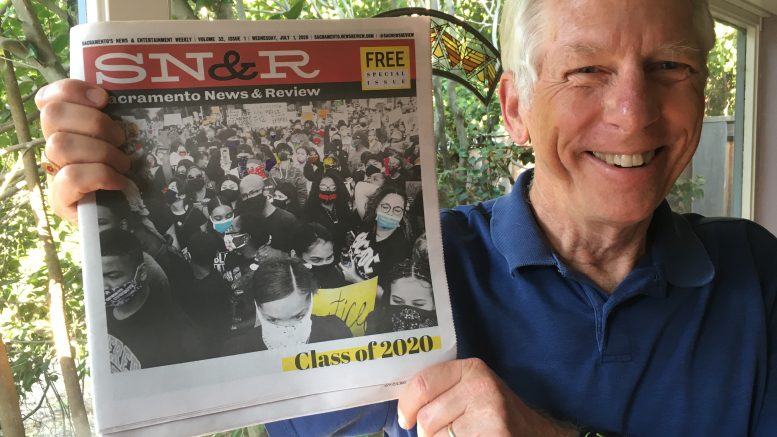 It is said that journalism is the first rough draft of history. And since we suspended our print edition after March 19, there has been a lot of history being made. The COVID-19 pandemic, the righteous anger and protests after the police killing of George Floyd and the unraveling of the Trump presidency are only a few of the historic events of the last few months.

When I look back over my lifetime, this moment in history feels most like 1968. The Vietnam War was televised, so its horrors came directly into American homes. It was the year that U.S. troops killed more than 500 Vietnamese civilians in the My Lai massacre. It was the year that Martin Luther King Jr. and Sen. Robert F. Kennedy were assassinated. It was a year of student protests and bloody clashes between police and demonstrators at the Democratic National Convention in Chicago. American athletes Tommie Smith and John Carlos raised their fists at the Summer Olympics in protest of racism. It was a year of terrible events, turmoil and unrest. People stood up and demanded change. It was a turning point in history.

Part of today’s moment in history has been the devastating impact that the pandemic has had on already struggling local community media, including the News & Review. When print advertisers pulled out and our distribution locations closed their doors, we had to suspend print publication.

But since, our readers have stepped up with donations that have gone directly to fund the work of our reporters. In addition, we received a federal Paycheck Protection Program loan, which will partially fund our staff for the next few months.

I am proud of the work our editorial staff has published online since mid-March. I appreciate the staffers who have stayed with us despite an uncertain future and miss those who are no longer working with us. And I am so appreciative of the support that we have received from our readers.

What will be the News & Review’s future?

Thanks to reader support and the federal aid, we plan to publish monthly, starting with this edition and continuing through at least October. We want to cover America’s most important election since 1932. After October, we are considering limited print publication or online-only production, perhaps reinventing ourselves as a nonprofit. We are reaching out to local nonprofit media organizations about partnerships and talking to potential investors.

“Thanks to reader support and the federal aid, we plan to publish monthly, starting with this edition and continuing through at least October.”

Looking into my crystal ball, our future is still unclear. The News & Review was founded in 1977 when the Chico State student paper broke away from the university and moved off campus. Since, it has always been both a mission and a business.

The mission spoke truth to power, enabled those previously unheard to be heard, presented unpopular views and celebrated the arts.

The business side has always been difficult. Speaking truth to power is not always a smart business move. We have only been able to survive because of supportive readers and advertisers and a staff that went far above and beyond the call of duty.

For the last 31 years, the Sacramento News & Review has put a weekly spotlight on people and organizations—some that desperately wanted coverage and some that most definitely did not. From our early coverage of the Rancho Seco nuclear plant to more recent coverage of law enforcement misconduct, SN&R has been a watchdog for Sacramento.

We have also played an active role in the community, producing the SAMMIES awards in support of Sacramento’s vibrant music scene, helping to start Second Saturday to boost the visual arts, founding the interfaith Call for Unity concerts after 9/11 and promoting local businesses with the annual Best of Sacramento issue.

2020 is a historic moment for America. Our country is at a crossroads. In a time of uncertainty and confusion, independent community journalism that covers politics, news and the arts is critical. With your help, we will provide it.