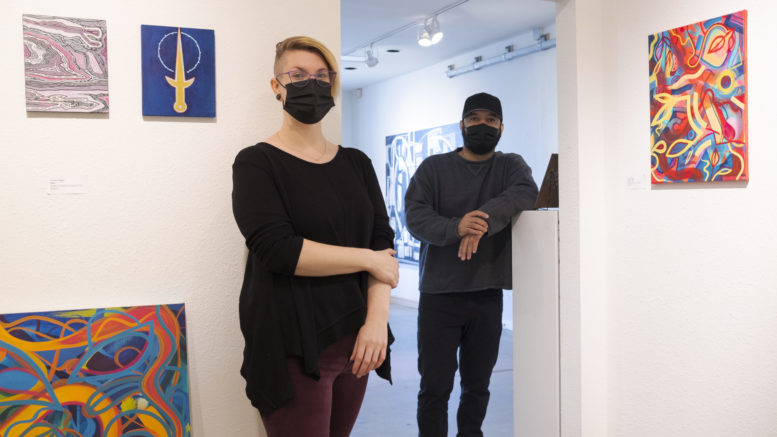 Project 25 is Sacramento’s newest gallery and it’s got a mission: Cultivate community, not competition

Eight years after the Solomon Dubnick Gallery closed its Midtown location’s doors, Project 25 has moved in to revitalize the dormant space. The project began in the mind of owner Mark Escobedo three months ago, and when an opportunity presented itself, he didn’t hesitate.

“They were renting it out for pop-ups and social gatherings,” said the former waiter. “I came into it and just took a risk.”

Ironically, upon moving to Sacramento, Delgado once had the gallery’s doors slammed in his face.

“Literally, slammed the door in my face,” Delgado said with a laugh. “The exhibit closed at nine and I was there at eight… At a karmic level I want to be a gallery that lets the doors open to different artists.”

He and Escobedo were joined by local event organizer and arts coordinator Aurora Love, who had been jobless for a month by the time Escobedo reached out.

“Out of the blue he was like, ‘Hey, I bought a gallery. I want you involved. Can we talk?’ and I was like, ‘Pfft, can we talk? Let’s talk!’” Love said. “We just started sharing ideas and it snowballed into this beautiful, passionate project.”

Soon after, Atlanta transplant Ashley Ragan joined the budding Project 25 team, after living and searching for a studio in Sacramento for eight months.

“I came here and I was like, ‘Oh yes, this is the place,’” Ragan said. “I just decided to rent the room and then from there I recognized that there was some more help that I can put into it.”

According to Love, the space is meant to give two impressions, first as a commercial gallery/studio where patrons can watch residents at work, and second as an exhibition/event space.

Project 25 hosted its soft opening on Nov. 14, with plans to host a grand opening event in January.

Months before its opening, Escobedo picked up side work with furniture maker Steve Taylor. At Taylor’s warehouse, Escobedo saw an open space with craftspeople at work in alcoves that surround a central lobby. He imagined artists at work in their place.

The next day, Escobedo says he learned that the Dubnick Gallery at 1017 25th St. was for sale.

As quickly as the Project 25 team jumped, coronavirus spread faster. In accordance with Sacramento County’s Nov. 13 regression into the most restrictive purple tier, Project 25 cancelled plans for a December event featuring Delgado’s work. But he isn’t too upset.

“We’re in the heart of a hotbed of creativity and social unrest and all these catalysts for great art to make Sacramento the right place at the right time,” Delgado said. “A lot of artists, are like, ‘When’s it going to go back to normal?’ There’s no normal dude, you have to really ride it out.”

Escobedo is hopeful that once Project 25 fully integrates an online storefront, the gallery will be able to sustain itself.

“It sounds like it’s a bad time, but I think if we get the online store up and going, we could get a little traction and when everything does mellow out with the coronavirus, we’re going to be in good shape,” he said. “It’ll come in time.”

Currently, the website features a range of talent, including established artists such as Delgado and Jose Di Gregorio.

However the focus of the gallery is fostering new artists in the community.

“My whole idea was to build culture and the art community in this area again, and to make it affordable for the artist that isn’t socially connected, that don’t really go out, that just want to do their art,” Escobedo said. “I want to get the homegrown artists in here and get them exposure.”

That includes Ragan, who sold her first piece out of the gallery.

Ragan said she hopes that the gallery can be a professional space with a laid-back atmosphere, through events such as the live painting at the soft opening and by simply working in the open studio on the gallery floor.

“It’s really neat when I’m in here working on something and somebody walks in and just, watches,” Ragan said. “How often do you get to see an artist in their like, hiding hole doing their thing, you know?”

The gallery is also featuring the work of Patrick Prager, executive chef at the Kimpton Sawyer Hotel. Prager recently began painting again as a way to explore other avenues of creativity during the pandemic.

“As a kid, in high school, I used to paint quite a bit actually,” Prager said. “I found a canvas in the garage—that was my daughter’s— and I had just watched Pollock—the movie—and I thought, ‘Oh, what the hell, I’ve always wanted to try this out.’ I found some house paint, and I started flinging it onto the canvas.”

When Project 25 opened, Escobedo asked him to join the team and soon after he took the honor of making the gallery’s first sale. While success has come quickly to Prager, he says he has no plans to leave the restaurant world.

“I’m happy to revisit painting and drawing, these different mediums, because cooking is an art form, too. I’m not switching gears at all, just adding new mediums,” Prager said. “We’ll see where it takes me.”

Delgado also hopes the gallery will be a space for new artists in Sacramento to grow.

While Delgado was a self-described “one-man show” in past projects, he says with Project 25 he is an adviser, looking to the leadership of Escobedo, Love and Ragan.

They hope to provide a space to cultivate “community over competition,” which according to Love includes using the gallery space—specifically the back conference room—as a place for budding artists.

“Having this new garden if you will and having our roots just starting to take a little bit, we want to be able to plant even more artists in our network and watch them grow and flourish,” Love said. “We just want you to feel like you can express yourself, especially the youth.”

While the team has yet to formally launch any supplemental programming, Love says it plans to offer art classes, solo lessons and mentoring. Also, according to Escobedo, the parking lot adjacent to the gallery will be used for outdoor live painting events.

While much of the programming has been put on hold due to the pandemic, Love is hopeful for the long-term future of Project 25.

“I’d really just love to have it open as a platform, that’s my dream,” Love said. “In five years, hopefully our network, being strong and secure, would allow us to branch out with other galleries and organizations to really start to bring even more programs to the city as a whole, so we can be a true contributing player to the arts in Sacramento.”