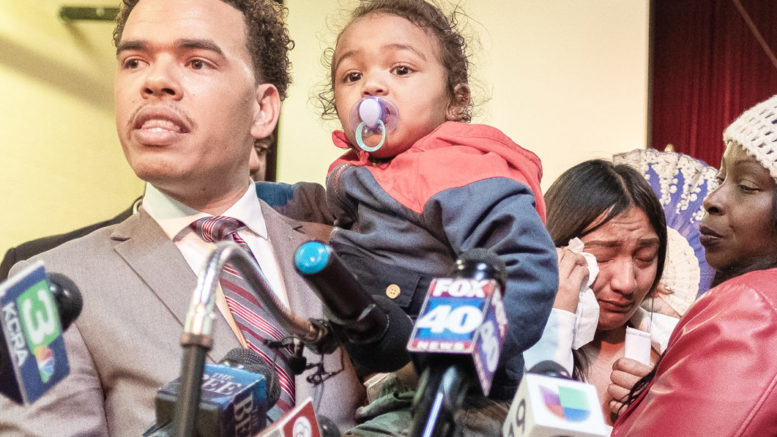 The Rev. Shane Harris, president of the People's Alliance for Justice, speaks at a March 2 press conference with Stephon Clark's fiancee. (Photo by Karlos Rene Ayala)

By the Rev. Shane Harris

Progressive California leads the nation in police shootings. This is no secret.

I personally am not against cops; I believe what they do every day is admirable. With that said, the ante is raised when one takes a job to protect and serve. In certain cases, we want officers found guilty of misconduct and disciplined for their actions. In 2018 and so far in 2018, there have been 1,172 fatal shootings by police officers, including 140 in California. I can count the officers who were prosecuted on one hand.

The debate of whether a police shooting should be investigated is one conversation. However, my issue is how and who as well as the what. With local district attorneys, we have the fox guarding the hen house. They are often endorsed by police unions, have a conflict of interest and should not be investigating officers who have supported them. The voting and support system of our democracy is a quid pro quo “something for something.”

For years, I have been challenging California Attorney General Xavier Becerra to do an independent investigation. To his credit, he did for Stephon Clark.

But let us not forget the law in this process, either—the law that Sacramento County District Attorney Anne Marie Schubert and Becerra cited in announcing they would not file criminal charges against the two police officers who killed Clark.

Yes, I know. I’m not from Sacramento, but I am born and raised in California, and I believe we can get this right.

In 2016, I was at the forefront of the case of Alfred Olango, who was killed in San Diego County by an El Cajon police officer during a mental health call. It was much like the Joseph Mann case, another Sacramento police shooting in which I also got involved. Police said that Olango “pulled out a vape e-cigarette which they believed was a gun at first sight.” He was killed and gone forever, a loss for his children, a loss for his family and a loss for a city and community.

Was this all because officers thought he had a gun, or police not following procedure dealing with mentally distressed Americans?

The night of the shooting, protesters began hitting the streets. I was at the hospital with Olango’s family at their request to stand with them, just like I’ve been for families across California and eventually I would be leading a movement for justice. I thought, “I know how this is going to go, the usual”—with protesters in the streets, public officials hiding behind City Hall and a district attorney who will have the weight of a major decision and most likely ruling in favor of the cop.

Time and time again I have watched this process of a district attorney investigating their own supporters with the same “book.” The pivotal focus of my call for justice has always been that it’s important that the attorney general get involved and independently take these sensitive cases because I have no confidence in the local prosecutors.

It is also why I believe that Assembly Bill 392 will finally address these concerns about how state law analyzes when deadly force is reasonable and when it is not. We have a supermajority of Democrats in the Legislature and a very progressive governor in Gavin Newsom. We need to pass AB 392 this year because it’s time to change “the book.”

I’m a sensible civil and human rights leader, and I believe that both sides need a break in this fight. The accountability and transparency between law enforcement and the community should be the priority.

What if the local DA didn’t have to preside at all over a police shooting? That’s my hope for the future. What if the “book” looked different than usual? What if we changed the perception at how investigators see excessive force? That’s my hope for now. Then maybe just maybe we can finally begin to get some justice.

Our fellow Americans will feel at least that they are all being heard and that someone neutral will review the facts of the case and be able to give a more transparent analysis of what happened. Every taxpayer wants their peace officers to be safe as well as the citizens.

We can’t do anything about Schubert’s report or even Becerra’s report, but we can do something about changing the law in our state for Stephon Clark. That’s where I and my civil rights organization, the People’s Alliance for Justice, will focus our attention. We do it for Stephon Clark’s children, Aiden and Cairo.

Be the first to comment on "Essay: Time to change the book"