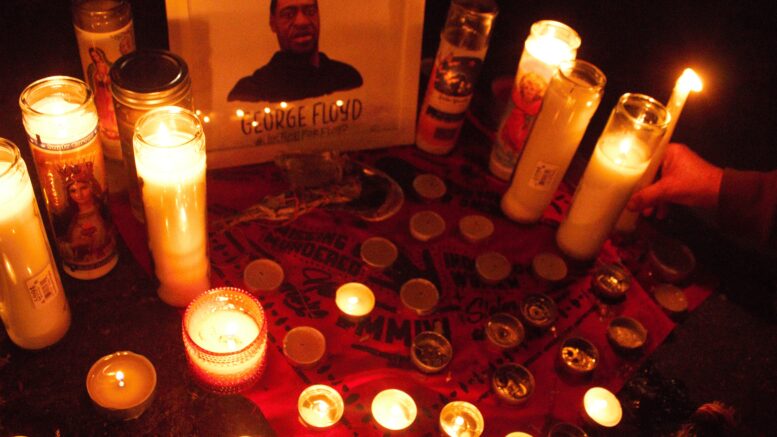 A Sacramento vigil honors the memory of George Floyd, killed by a Minnesota police officer on Memorial Day. (Photo by Kevin Gomez Jr.)

Sacramento police arrested nearly 50 people during a tense three-night period of civil unrest sparked by the Memorial Day murder of George Floyd, an African-American Minnesota man who begged for his life from under a policeman’s knee.

But an SN&R review of available booking logs shows that more people were arrested for civil disobedience than rioting, prompting legal observers to ask why law enforcement waited so long to respond to the destruction of property in the downtown area over the weekend and then target who it did.

“The looters were long gone by the time they [police] came for us,” said Elizabeth Kim, executive director of the Sacramento chapter of National Lawyers Guild, which sends legal observers in bright green caps to monitor protests. “Which is why it’s so ironic that we were the ones who got shot.”

As with 120 cities across the United States, downtown Sacramento saw hundreds of mostly peaceful demonstrators who were already enduring a worldwide pandemic and the worst economic collapse in generations when cellphone video of Floyd’s strangled last breaths sent them outside to confront a system that has moved slowly to protect the rights of black men.

In Sacramento, the marches mirrored the ones that shut down freeways and interrupted daily life following the fatal police shooting in 2018 of Stephon Clark, an unarmed black father standing in his grandparents’ backyard when two police officers searching for a vandal rounded the corner and opened fire.

Even with Chauvin’s quick arrest, massive protests erupted in Minneapolis and other cities, many teetering into rioting and police aggression in Los Angeles, Seattle, Atlanta, New York and elsewhere. Saturday and Sunday nights in Sacramento, impassioned but organized marches unraveled after the sun went down and individuals began vandalizing businesses and property, including several storefronts along J Street. Some marchers blamed authorities for escalating tensions and assaulting innocent bystanders, including legal observers, reporters and at least one black teenager who was taken to the hospital after a rubber bullet punctured his face.

Kim said she was struck by beanbag rounds and that a clearly identified NLG videographer was shot in the head with a rubber bullet while leaning against a wall at 21st and J streets on Saturday night. “The officers straight pointed their rifles at his head and fired,” she said Monday. “It was crazy.”

“This is by far the most severe, intense and uncontrollable protests I’ve seen in Sacramento,” said Kim, who has lived in the city since 2006.

As for who was apprehended, the Sacramento Police Department says it arrested one person on Friday, 18 people on Saturday and 28 people on Sunday. Newly released booking logs offer a partial snapshot of what these people were arrested for.

The records, analyzed by SN&R, show that between Saturday and Sunday, Sacramento County law enforcement officers arrested 29 people in the vicinity of the protests. Fourteen were arrested for failing to disperse from the scene of a riot; 11 for committing burglary during a state of emergency; four for vandalism; and one for causing injury or death while driving under the influence of alcohol.

Kim said she’s glad authorities caught some of the people causing the destruction, but was perplexed why so many marchers were rounded up.

“They are not our folks,” Kim said of the people who broke into businesses. “But law enforcement is treating us all the same.”

Out of the 29 people arrested, only five were from outside the county, with three residing in Roseville, one in Stockton and another in St. Louis.

Fifteen of the people arrested are black, 11 are white and five were identified as Hispanic in the booking logs.

Kim said she expected news of more street actions in the coming days, as the Sacramento City Council planned to institute a curfew starting Monday night. She called the past few nights in Sacramento “a completely different game” compared to protests of the past.

“It was a war zone out there,” she said. “None of us were equipped.”

Be the first to comment on "Stat of the week: Who was arrested during Sacramento’s George Floyd protest marches?"