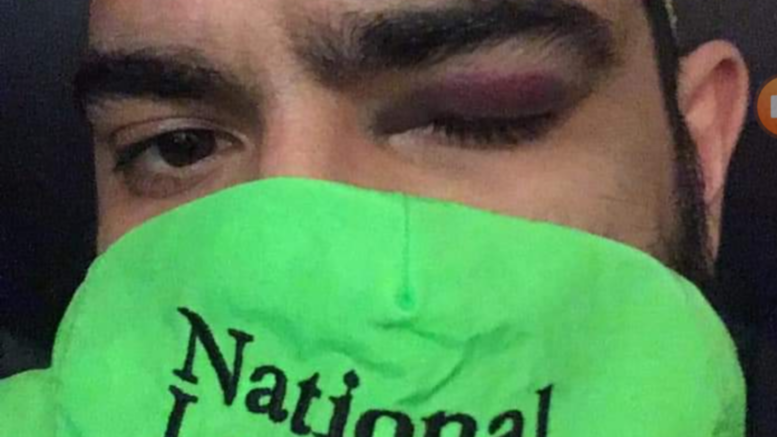 On normal days, members of the Sacramento chapter of the National Lawyers Guild provide support to residents who may not have advocates to guide them through the intricacies of our criminal justice system.
In the past week, members have shifted into their other role: documenting the interactions of police with protesters and bystanders.

It may seem simple enough: the killing of George Floyd while in the custody of Minneapolis police officers was filmed on cell phones. But trained legal observers attend protests specifically to document how law enforcement officers treat demonstrators. Their photos and videos supplement—or perhaps counter—what goes into a protester’s arrest report.

Liz Kim, president of the Sacramento chapter of the National Lawyers Guild, describes the role legal observers play as protests continue in Sacramento.

For the most part, we monitor police activity and make sure no one’s First Amendment rights are violated. So that’s number one, as our primary duty. We also do a lot of things like sponsor legislative bills. We conduct know your rights trainings. We do legal observer trainings. We also work in collaboration with other civil rights organizations to put on educational forums. We hold town halls, and we write support letters for various entities on issues ranging from homelessness to criminal justice reform, mental health. We actually have subcommittees as well, and we hold happy hours and do trainings on various legal matters, and offer online courses that want to get more familiarized with policy and law.

What have you been doing in the past week as the protests have been building?

Locally, here in Sacramento, our first protest was on Wednesday of last week. It started off as a candlelight vigil for George Floyd’s death, and after that it was a series of actions consecutively that were taking place throughout the city at various levels of severity. So all hands on deck have been going to monitoring all police activity. Let me just tell you, it’s been a rough weekend.

We have a team of about 20, but only about six to ten can be deployed at once, and that’s on a good day. Me, for example, I’ve been out there pretty much every day for the last four days, with very little sleep.

You have a team of 20, but only six at a time. Is that to maintain the energy needed to do this?

Yeah, I’m the only one without kids or a husband. Most of them are married with full-time jobs; everybody on our team are full-time lawyers, judges, legal workers, so they all have day jobs and they’re doing this on top of that with their families. So it’s based on availability. Sometimes it gets down to only about one or two out there… but we at least try to have two out there at a minimum. But due to the volume of actions, we’ve thankfully been able to have 5 or 6 at a time.

We are actively recruiting. We held a legal observer [training] about two weeks ago, and we’ll be doing another one this week hopefully. And we’ve had a lot of inquiries of people wanting to help and donate, so that’s been really encouraging.

Could you describe in a little more depth what a legal observer does?

Yes. A legal observer’s job is to remain neutral and not tell the crowd what to do, but we’re there to watch the police. We’re also not there to take sides. We’re there to purely record and any and all actions taken by the police against protestors. This is to ensure that if, in the case of any activist, protestor or demonstrator is arrested, that they’re not brutalized or a victim of police violence, and once they’re arrested, that there’s something to compare in terms of the police reports that are written against the alleged perpetrator.

We’re there to take a count of how many officers are on site, we’re there to take the badge numbers or name tags of each officer on the site, and especially get the information of the person arrested so we can follow them through custody in order to get them out as soon as possible, and then find them a pro-bono attorney if they’re charged with any crimes.

I understand that a member of your team was hit by a rubber bullet this past weekend.

Yes. Saturday evening we were out there. It was just the two of us because the action continued on very late into the night, and at this point there were several groups throughout the town, and we were following the biggest group that was traveling down J Street, I would say from about 7th all the way down to about 21st. That’s when the standoff happened with the police officers, They showed up, about 100 squad cars with sirens blaring, met the protestors at that point on J and 21st. They gave dispersal orders about six times and each dispersal order—which we have on video—advised the protestors to get on the sidewalk and disperse.

Danny Garza, who is one of our [legal observer] coordinators, trainers and board members, was complying with that order by standing on the sidewalk, but unfortunately the officer—somebody in the crowd threw something from far back, and the officer looked up and assumed it was [him] and took a rubber-bullet rifle, pointed it right at his head and shot him right in the head.

From what distance was he shot?

I would say about eight feet. Pretty close. Not far at all.

Yes, because we all stress to people that are interested in this work that we’re not here to glorify or capture these incidents to promote the sensationalism. That’s not what we’re here for. We’re here to depict what has accurately happened as truthfully as possible, and then also to provide a testimony if and when the protestor is arrested, to verify the actions of the officer.

So it’s very important that we’re not capturing or recording any actions taken by the protestors because we can be subpoenaed to then have to testify against them, and we’re here to protect their constitutional rights. So it does take some training and a lot of thoughtfulness in how we proceed, because we’re playing with something very risky for who we’re trying to advocate for.

You’d mentioned donations. What would a person’s donation go toward?

We have two things going on right now. We have annual fundraisers, but right now we’re trying to gather bail funds for those that are arrested, but National Lawyers Guild, as a national chapter, does not take bail funds for our own purposes, because that would prove bias and we need to be objective when we’re observing, but we do work with sister organizations that are taking bail funds.

We actually have a link that’s available on our website, which is NLGSacramento.com. NorCal Resist is the entity that is taking bail fund money for bailing out protestors, but if you want to donate to NLG Sacramento directly, we will be using those funds to help with supplies such as protective gear for protestors and our legal observers, gas masks, goggles, helmets, things like that to help them stay protected if choosing to take action by standing off with the police.

Do you intend to continue as legal observers for however long these protests may go on?

Absolutely. We’ve been in existence for 83 years doing this and we will absolutely continue offer or services as long as this takes.

What will NLG’s role be after the protests subside?

We will continue to offer legal observing services. I know activists tend to feel a sense of safety when we’re around to help be an eye. We’re also there to contact their family members for them if they are arrested. We try to do as much groundwork as possible to keep the level of comfort and peace as much as we can for the families that are affected by these actions and also in the case of extreme police violence. For example, there was [potentially a minor, name withheld] who was shot in the face and was profusely bleeding. Families like that will reach out to us and seek out legal counsel. So we will be in charge of getting them representation and following them through their court cases and helping them with lawsuits and things like that.

How can people get in touch with you if they’re interested in volunteering or otherwise supporting your mission?

We have a hotline for everyone to call. We have our board members standing by to take those calls 24 hours a day, 7 days a week, and that number is (916) 500-4NLG. I want to encourage everyone to stay safe. I know the news is trying to do their best to depict what’s going on, but it’s completely different when you’re on the ground, right in front of the standoffs and things like that.