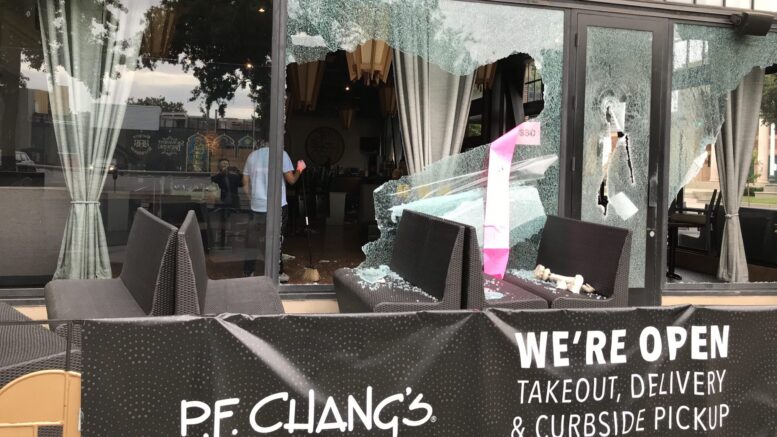 The P.F. Chang’s restaurant at 16th and J streets is one of dozens of businesses damaged and vandalized over the weekend in downtown and Midtown Sacramento. (Photo by Foon Rhee)

The immediate priority for Sacramento officials is to find the right balance between allowing, even promoting, peaceful protests over George Floyd’s death at the hands of Minneapolis police—while at the same time controlling the vandalism and destruction by small groups of protestors.

After three nights of worsening violence—including damage to some 130 businesses in downtown and Midtown and more than 40 arrests—the City Council declared a local state of emergency and an 8 p.m. to 5 a.m. curfew that started Monday night and will continue at least through the weekend and until further notice. Also, 500 California National Guard troops were deployed Monday night to protect “critical” infrastructure, both public and private.

But it may be too late to stop another major concern: That the protests will cause a spike in COVID-19 cases in Sacramento, just when infections had stabilized and more businesses were about to reopen.

Steinberg said Sunday he’s concerned about coronovirus gaining another foothold and forcing the city to reverse its gains. He also encouraged protestors to get tested.

While many demonstrators are wearing masks—some to hide their identity as well as to prevent spread of their virus—many others are not. And social distancing is not happening in crowded rallies and marches.

Public health experts warn that the mass protests across the nation create dangerous conditions for the virus to spread, though being outside can lessen the risk. People are yelling and chanting. They’re sneezing and coughing when hit by pepper spray or tear gas. And they’re gathering in large crowds, where just a few infected people can spread the virus to dozens.

“Sacramento County Public Health reminds residents that gathering with persons outside of those you live with is still a risk for contracting COVID-19,” the agency said in a statement Monday. “It is strongly recommended to wear face coverings and try and maintain social distance when in public places.”

The California Office of Emergency Services has added guidance on safely expressing political views during the pandemic. It warns that “activities like chanting, shouting, singing, and group recitation negate the risk-reduction achieved through six feet of physical distancing. For this reason, people engaging in these activities should wear face coverings at all times.”

It recommends in-car protests and using “alternative channels, such as the many online and broadcasting platforms available in the digital age, in place of in-person gatherings.”

As of June 3, Sacramento County Public Health reported 1,463 confirmed cases of COVID-19 and 58 deaths. It loosened the stay-at-home order on May 22 and again May 26.

Then, the protests began ratcheting up May 29.

Steinberg said that Sacramento has been struck with two hard blows—COVID-19 and now the violent protests. But he still expressed optimism that the city will come back even stronger.

“Standing together in support of peaceful protest and against violence and destruction of our small businesses in @TheCityofSac. We will emerge from this ordeal stronger than ever!” he tweeted Monday with a photo of the City Council in front of City Hall.

The COVID-19 numbers in a couple of weeks will have a big say about how long that recovery will take.

Be the first to comment on "Protests during a pandemic"