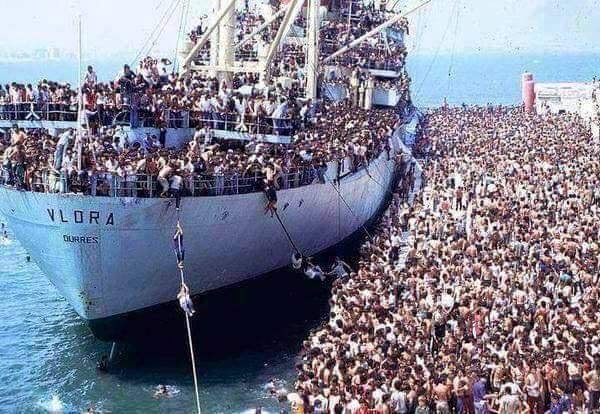 Thousands of South Vietnamese residents try to escape the fall of Saigon on U.S. naval ships.

When Dr. Carolee Tran recalls her last glimpse of Vietnam as a child, the most searing memory involves hundreds of people crying out.

“It was just like heavy rain,” she says of the chorus, “but it was the anguish—the anguish of people, and the fear, and the terror.”

She was 8 years old when she was hurried onto the last American naval ship waiting off Phu-Quoc Island. North Vietnamese soldiers were breaking down the gates of Saigon. As Tran looked out, she watched a desperate tide of humanity bank against the ship. The vessel couldn’t take most of the escapees. Tran remembers glancing up at U.S. sailors with tears in their eyes.

The chaos had started hours before. The daughter of a South Vietnamese Army officer, Tran had been pulled from her bed in the middle of the night, rushed through a lightless house and dragged into a street filled with people running by. Once her family saw the ship, they began jumping across a line of fishing boats to reach it. Tran saw drowned villagers floating in the water. In the shoulder-to-shoulder rush, it was a total stranger who got Tran aboard the ship. What lay ahead for the little girl was hours of not knowing where her mother and sisters were, weeks of not knowing if her father was alive, and months of not knowing when she’d have a place to call home again.

Today, Tran says the panic that engulfed her that day is the reason she became a psychologist who specializes in treating war and refugee trauma in Sacramento.

“The experience of escaping, and resettling in the U.S., has colored everything that I have done in my life,” Tran says. “It’s been the driving force.”

It’s also the reason Tran refuses to stay silent in the face of surging anti-immigrant and refugee sentiments making an ugly rise in the American consciousness.

Standing on an elementary school stage,Tran and her little sister stood petrified as people hovered above them, vigorously praying in a language neither girl understood.

Tran’s family had been sponsored by a Protestant church in the Bay Area, who’d recommended the campus to her parents. Hauled onto the stage, 9-year-old Tran didn’t know what was happening, but she did keep hearing the word “saved” being invoked. The evangelicals then started parading the two small girls out to every classroom at the school, announcing that they’d been saved.

“Cultural insensitivity can be very harming to people,” Tran notes. “The lack of respect they had for whatever our faith was—and doing that without our parents’ permission—it all made me go home crying.”

For Tran, that’s just one example from the daily minefield of shocks that refugee children have to navigate when they land in a new country. She says like most young arrivals, she and her siblings eventually began to find their bearings. But the path she watched her parents go down was harder.

Tran’s father, Tam Tran, went from being an upper-middle-class army major in Saigon to working as a janitor. At one point, he was making a three-hour, round-trip commute every night to clean a multiplex theater by himself. When Tran would help him on weekends, she’d break down in tears seeing how grueling her dad’s job was. Tran says her father felt strongly he should contribute to the American workforce and not be on public assistance, but she could tell that he was silently internalizing the stress that comes with downward mobility. It’s a phenomenon she’s seen often in her work counseling refugee families.

“It can really affect people,” Tran says. “With that whole generation, the thought was that if they could just make it to America, everything would be great. They had no idea how hard it was going to be.”

As Tran’s parents juggled multiple jobs, they insisted she not drop out of college to help the family. That paved the way for her to become a Harvard-trained psychologist and assistant clinical professor at UC Davis. In 1997, she authored a major study on domestic violence in the Vietnamese refugee community. She found that the group suffered above-average rates of domestic violence incidents and that the shadow of the war was usually playing a direct role.

“It was cases where the perpetrator, usually the man, had gone through his own trauma in the war, and often downward mobility, and was inflicting this on his family,” she says.

Tran also co-authored a study in the 1990s with her husband, Hinton Ladson, M.D., that determined rates of post-traumatic stress disorder in the Vietnamese refugee community were more than double the rates of those in the general population. Tran recently told SN&R that this situation was exasperated by a lack of government agencies or nonprofits having mental health services for Vietnamese, Hmong and Cambodian refugees in the 1970s and early ’80s (Read “After the war,” Feature, October 4, 2018). Tran has some thoughts on why that outreach didn’t happen.

“The Vietnamese refugees were unfortunate in the sense it was the first war America really lost,” Tran says. “So, there were a lot of negative feelings, both towards the American vets and the Vietnamese themselves. … I think there was a lot of resistance to having any kind of infrastructure to help them. My feeling is that’s a part of what was going on. As a country, we were dealing with a bitter taste in our mouths.”

Last week, Tran relived her flight from Vietnam for students at Sacramento City College. She’d been asked by professor Sheryl Fairchild to speak to the school’s Global Women’s Issues class, which is studying the intensity of the refugee crisis at home and abroad. Tran told the students how deeply traumatizing war and displacement can be, and that healing is a process that can take a lot of work—and time.

The doctor also shared her concerns about President Donald Trump’s anti-immigrant rhetoric, as well as the hidden forces of hate it’s been tapping into.

“She has such a beautiful way of connecting her story to the current moment and some of the harassment and discrimination that refugees and immigrants experience,” Fairchild observes. “We have a very diverse group of students and her words touched a lot of them on a personal level.”

She adds, “When someone like Dr. Tran shares their story in person with the students, it has a really direct impact—they don’t have any distance from it.”

Tran’s been speaking to students at the college for two years now and hasn’t shied away from raising her fears around the alt-right’s targeting of immigrants. Tran expressed similar concerns when she was a guest speaker at a local premier of Ken Burn’s documentary The Vietnam War. Her words that evening were overtly political at an event where it seemed like veterans and sponsors were trying to be anything but.

Tran has no regrets. She’s also been sharing her experiences with students at UC Davis and health professionals at several major conferences. Tran says she wants to be a spokesperson for the many contributions immigrants and refugees bring to the American mosaic.

For Tran, a documented rise in hate speech and incidents since Trump’s election hit close to home just last year. She says she was exercising inside a gym in Davis when a middle-aged white man verbally accosted her. She says it happened without warning. The man started badgering her that all Asians “should be sent away.” Tran filed a complaint with the gym and the local police department.

“I really felt assaulted by his words,” she says. “I had never experienced anything like that since I’ve been here. … That’s what so troubling to me about this moment, this unleashing of aggression towards people of color so freely. And it is our president who’s setting the tone.”

As the White House concocts new ways to restrict legal immigration, Tran is only more determined to use her story as a way of humanizing refugees. She’s currently writing a memoir and says she’ll speak to any organization that invites her.

On October 16, she’ll speak at Sacramento City College’s Cultural Awareness Center in an event that’s open to the public. While her work as a clinician remains important, Tran stresses there’s another kind of work that needs to be done.

“I feel compelled to speak up,” she says. “It’s a responsibility, especially now, during these times. … What’s happening compels me to be there for others.”

Be the first to comment on "A healing voice"