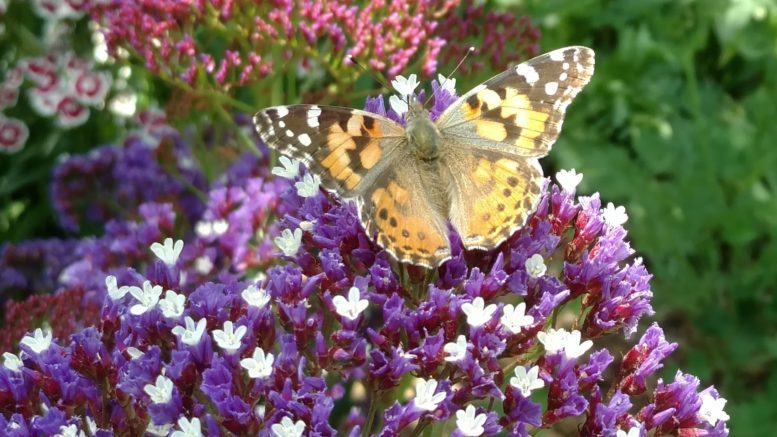 Painted lady butterflies are being mistaken for monarchs. (Photo by Debbie Arrington)

“With all the publicity given to the collapse of the California monarch population, I keep getting these celebratory e-mails: ‘The monarch is saved! Thousands of them are flying through Modesto right now!’” said butterfly expert Art Shapiro, professor of evolution and ecology at UC Davis. “Sorry. Uh-uh.”

Those are no famous monarchs. They’re common painted ladies.

“The wing shape, the way they fly is different,” said Shapiro, who says he hears a new monarch mix-up every day. “They don’t really look similar at all, except for being mostly orange and black. … The miracle is to get people to notice things at all.”

While real monarchs are extremely scarce this spring, millions of painted ladies moved through the Sacramento area. Their explosion coincided with this spring’s Super Bloom.

“This is the biggest painted lady year since 2005,” said Shapiro, “though my rough estimate is that it’s only about 15 percent the number seen in ’05. … That year was the biggest Super Bloom ever recorded.”

“It was the worst [monarch year] ever,” Shapiro said. “The entire overwintering population in the state was estimated as only 28,000—an all-time low. Since the clusters broke up, they seem to have disappeared off the face of the Earth. … Thirty years ago, you could count 28,000 in one little park in the Bay Area.”

This spring, one monarch was recorded near Chico, another near Auburn. Shapiro saw one May 10 in the canyon of the South Yuba River.

Painted Ladies have a huge advantage over monarchs, which demand milkweed as their breeding habit and to feed their young. “They’re not picky eaters and they’re highly mobile,” Shapiro said. “Natural enemies can’t keep up with them.

“One of the reasons they can build up their numbers so quickly is that, unlike monarchs, they can breed opportunistically on you-name-it,” he added.

“They mill around looking for places where rain has triggered large-scale germination of annual host plants,” Shapiro explained. “Because of the contingent nature of this, their enemies don’t know where they are, so they can build up huge numbers really fast.”

In addition to butterflies born near the border, more Painted Ladies are hatched along the way north in the Central Valley, creating a second wave as they head to summer flowers in Oregon and the Pacific Northwest.

“Usually there is a hiatus, but this year the migration from the desert segued directly into the migration of butterflies bred in central California,” Shapiro said.

This migration has been going on for two months, and reached the area on March 17. It may be over by Memorial Day.

Heading south in October, another generation of painted ladies may fly through town, but the biggest groups will be on the other side of the Sierra. According to Shapiro, they love the fall-blooming rabbitbush in Carson Valley.