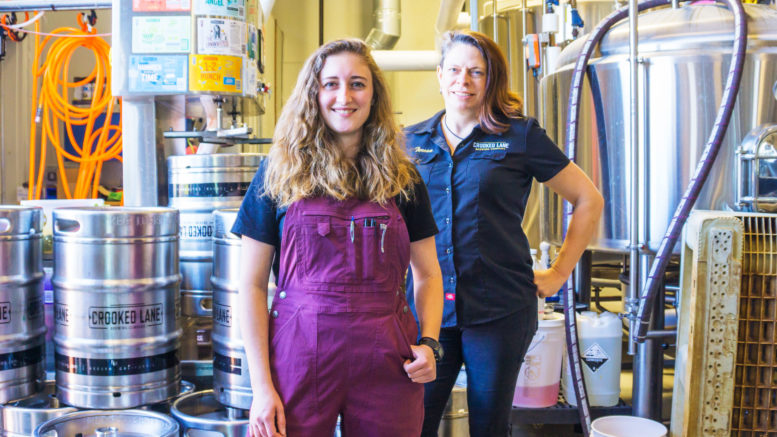 Despite persistent stereotypes, women are crafting their course in the local beer scene

Dressed in maroon overalls and work boots, the head brewer of Crooked Lane Brewing Company in Auburn has spent hours boiling and knocking out new, hoppy batches. It’s a double brew day and she’s using an industrial-sized mash tun and boil kettle. Hot water and grains steep inside, emitting a sweet and nutty aroma throughout the 15-barrel brewery.

Alyssa Steger, 23, is one of the youngest women to work in production in the region’s growing craft beer industry, yet she’s hardly the only one.
It’s no secret women enjoy beer, too. They like drinking it, brewing it and working up a sweat on the production floor.

But the beer scene is male-dominated and not immune to sexual harassment or worse. In February, for example, a lawsuit was filed by one of two married couples who started Sacramento’s Track 7 Brewing Company in 2010. In the lawsuit, Geoff and Rebecca Scott accuse Ryan Graham, his wife Jeanna and investors of wrongful termination. The pending suit also includes accusations of sexual remarks toward female workers.

When asked, Track 7 declined to comment on the lawsuit, but stated in an email that it doesn’t support sexual harassment.

Still, more women are applying for jobs, and not just for taproom positions pouring pints. Instead, they’re drawing on their educational backgrounds in food science and chemistry, they’re home brewers turned professional and they’re crafting new paths for future generations of women.

Teresa Psuty recalls the year leading up to opening Crooked Lane in April 2016. She was a stay-at-home mom, waking up at 3 a.m. to start her homebrew before her three kids rolled out of bed. She’d test her batch, perfect her recipes and clean up her equipment.

Now, Psuty is brewmaster and co-owner of the business and also a member of the Pink Boots Society, a global nonprofit that supports women working in the beer industry, especially craft beer.

Change in the industry has been slow, and there’s still a gender bias. In a January study published by Stanford University, researchers discovered when consumers were told a craft beer was made by a woman, they evaluated it more negatively than the same product made by a man. A previous study also found that just 4% of brew masters and head brewers are women.

“Nobody should ever be held back because of gender. I’d like to think that that never happens, but it’s true that there’s few women in leadership roles in breweries and that needs to change,” Psuty said.

And, she adds, much of the responsibility for change lies with women.
“Are you willing to put yourself out there and just try to pick up new skills?” she asks. “There are educational pathways that you can take to get this job … You just have to put the work in.”

Program manager of the UC Davis Master Brewers Certificate Program, Melissa Marbach, told SN&R that in 2018 nine women were in enrolled in a class of 40, which she said is a large increase compared to past years where there were none enrolled in the program.

Steger holds a bachelor’s degree from UC Davis in food science with an emphasis in beer and brewing science and says she fully intended on going straight to culinary school. When she signed up for an introductory brewing class just for fun, however, she says she fell in love with every aspect, including the physics and chemistry, the biology and the fermentation process.

She also started to notice more women were interested in beer science and taking related courses at UCD.

Steger is also president of the Pink Boots Society’s Sacramento chapter, which has nearly 80 members. It’s where she says she leans on fellow women in the industry. For her, the biggest challenge she’s faced is the surprise of men when they learn she’s a brewer.

That can lead to a bigger, systemic problem, she says.

“If you don’t expect us to be here, then you’re not going to make room or hold opportunities to the same availability for women who work in the taproom and are just as excited to be in the back as a homebrewer you found off the street who’s a guy,” Steger said.

“I don’t have brawn to any degree, but I’ve surprised myself with some of the things that I can move around back here,” she said.

A large number of women in the craft beer industry work in taprooms, but Ellen Sherrill, a brewer at Track 7’s Natomas and Curtis Park locations, says the physical labor of production is actually comparable to baking. Yet, more men continue to hold those positions.

“Historically, beer is like a ‘man thing’ and I think that has changed a lot,” Sherrill said. “I’m hoping that women as beer drinkers drive more women into being involved in making beer. It’s slow, but steady.”

Sherrill started as a homebrewer, making batches of beer she enjoyed drinking before getting hired at Jackrabbit Brewing Company in West Sacramento, where she worked for more than a year.

“I just don’t want brewing to be like a boys club. It doesn’t need to be,” Sherrill said. “I want to see women being taken seriously for their ideas and creativity.”

Scott Powell, co-owner of Jackrabbit Brewing, says the applications he sees are largely from men, but when Sherrill applied for the job he hired her based on her passion for the industry and her homebrewing background.

“There are more female applicants and more involvement,” Powell said. “A lot of it’s attitude and eagerness. It’s people interested in the science and the quality of beer.”

Up in El Dorado Hills, Lauren Zehnder is manager and Jane of all trades at Mraz Brewing Company. She manages the staff, sales and marketing in conjunction with owner, Mike Mraz. She’s also the first female board member, and as of March, first woman president of the Sacramento Area Brewer’s Guild, the organization behind the annual Sacramento Beer Week.
Over the years, she says, she’s seen a steady shift in perceptions.

“More and more men in the industry realize when a woman walks in the room she might be just as knowledgeable and have just as much to contribute to the beer conversation,” Zehnder said.