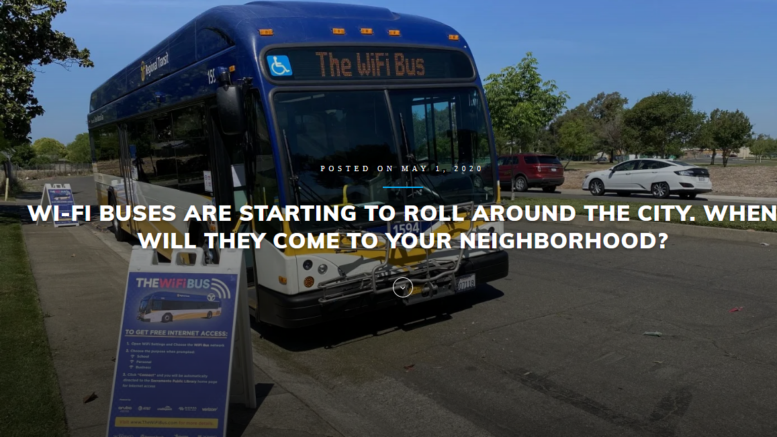 The city of Sacramento and Regional Transit are partnering to create Wi-Fi hotspots using buses.

Editor’s note: New city programs during the pandemic need to take every precaution

City Hall and its partners are brainstorming lots of innovative ways to serve Sacramento residents during the COVID-19 pandemic.

But with a deadly, highly contagious virus, even programs with the best of intentions need to take every precaution.

A case in point: Meals for Meadowview—sponsored by the city, Fresher Sacramento and Bank of America—is designed to make sure families get nutritious food.

The distribution of 600 free dinners a week started May 14 and is scheduled to continue Tuesdays and Thursdays through July 2 at the Pannell Community Center pool kitchen.

So far, the program is first-come, first-served, which seems like a recipe for making physical distancing more difficult. That potential was pointed out on Twitter: “Are you insane? Another bright idea from the City to encourage groups of people to gather in groups for hours?” The commenter suggested reservations at staggered times.

City Councilman Larry Carr, who represents Meadowview and is helping sponsor the program, said that idea was reviewed, but there are bureaucratic hurdles to coordinate scheduling. Plus, he said the first distribution of 300 meals on May 14 went smoothly, with people waiting in an orderly line and staying apart.

Still, the situation will be closely monitored, he said. “If we run into problems…we’ll have to change our approach,” Carr told me. “As of now, it doesn’t appear to be a problem.”

Another example: Starting May 4, the city, Sacramento Regional Transit and the state transportation agency teamed up to roll out buses equipped to be free wireless hotspots in neighborhoods with limited high-speed internet access.

With schools closed and people staying at home, broadband connectivity is essential for distance learning and tele-work.

Ten buses are each providing 3 ½ hours of broadband services at two locations a day, seven days a week, totaling as many as 140 hotspots a week. The locations, which are posted online weekly, are being determined by city, transportation and public health officials, with input from schools and community organizations. The sites are chosen in “digital desert” communities where it’s possible “for users to maintain physical distancing and follow public health guidelines.” Monday, they’re mostly at schools, with a few libraries, parks and community centers.

The range of the hotspots, however, is only 1,800 feet, which conceivably could lead to crowding if it gets busy.

Regional Transit spokeswoman Jessica Gonzalez said that users are not allowed on board the buses and are reminded about social distancing. At some locations, the Sacramento Public Library is providing access at its parking lots, and library staff have tents and tables with distancing reminders.

“This is a pilot,” so RT and its partners are monitoring which locations work best, Gonzalez said in an email.

Sacramento County appears to have successfully limited the COVID-19 outbreak, at least so far. To avoid any resurgence, it’s essential to closely watch any programs that bring people together.

We don’t want families to go hungry or students to stop learning—or socioeconomic divides to widen—during the pandemic. But we certainly don’t want to put public health at risk, either.

Be the first to comment on "Better safe than sorry"