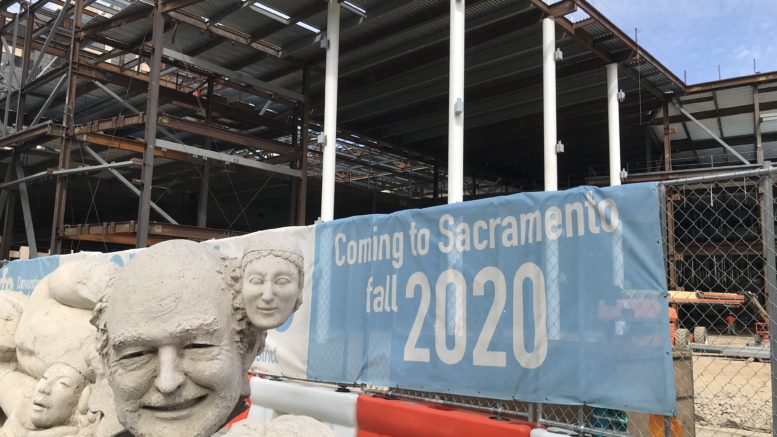 The expanded Sacramento Convention Center is scheduled to open by January. But how many meetings will come?

Don’t believe for a second that the convention center would have been a great community investment except for the coronavirus pandemic.

They can definitely take their time on construction now, but it’ll bounce back. This ain’t forever.

It’s perfect timing. There are no conventions happening anywhere so this is a perfect time to be “down” for construction. Everything will be finished when the economy gets rolling again.

The convention center has lost money for its entire existence. The mayor and City Council have covered all the financial losses with massive bailouts from our tax dollars. We didn’t need that convention center and it has done very little for the economic well-being of Sacto.

It’s a pork project, corporate welfare, money-losing bottomless pit. All the taxpayer funding wasted to bail out the badly managed convention center could have solved homelessness.

Re: “Dating during coronavirus” by Joey Garcia (Ask Joey, March 19):

I believe that one of the lasting changes of our collective response to this pandemic is that it has challenged us to confront what we consider “essential” and “non-essential.” We’ve seen how important the people whose roles we probably once considered to be mundane actually are. Supermarket personnel, delivery persons, food industry workers—these are the folks who make a meaningful difference when our lives are stripped down to the bare bones.

And what are the things that lend life richness, that give us reason to stay alive? Human relationships, interacting with one another, love. Joey Garcia’s column, Ask Joey, manages without fail to feed all of the above. Her innate wisdom and honesty is poignantly reflected in each of the insights she publishes, and her perspective has become a valued staple in the lives of her readers. For these reasons, I consider her to be “essential” to or community.

The power of pancakes

Thanks to SN&R and many Sacramentans with a hunger for history and pancakes, it looks like the future of Pancake Circus might be a little brighter than anticipated…. They seemed destined for closure due to lack of business after restaurant dining rooms were shuttered. The SN&R story was shared on social media pages, including local history and architecture groups, causing outcry among long-time customers and fans of mid-century design…. Business picked up so much that Pancake Circus is now re-hiring kitchen staff to keep up with a flood of to-go orders!

“Business as usual” is still a question mark for Pancake Circus and so many other businesses and institutions. This week also marked the closure announcement for another beloved restaurant and architectural landmark, Biba. But efforts like this demonstrate the power of historic places to bring us together, the strength of community in adversity, the critical role of local journalism and the importance of a good breakfast!

Send in the clowns

Re: “Walking the tightrope” by Lindsay Oxford (Dish, April 28):

A great place, but I can’t tell you how disappointed I was in college when I went there for the first time only to find out that the staff were not dressed as clowns. I’ve never fully gotten over it but I support them.

Dear to my heart

There are a LOT of local businesses struggling and in need of support right now, but one near and dear to my heart is Pancake Circus. This uniquely-Sacramento, independent and delightfully quirky diner has been a favorite of Francis and mine since we moved here nearly three years ago.

“When the restaurant story finally hits a nerve”—ME, right now! This was an amazing memory of mine with you! You could feel the history and the good memories in its architecture.