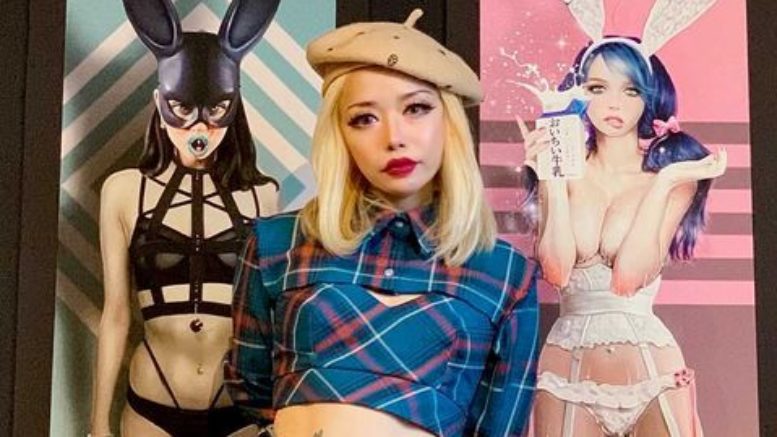 Artist Kosono Okina stands at Lin Fei Fei Artspace in front of two of her digital paintings that are being shown in the space. (Photo courtesy of Kosono Okina)

She began making art when she was five. Now in Sacramento, former Nintendo art designer Kosono Okina is showing what she’s really capable of.

“It’s just not [a] real thing in Japan, selling art there,” says Kosono Okina. “Even if you have a very high skill painting… if you’re not popular, no one wants to buy your art in Japan. So that’s the reason why my father [was] always stopping me.”

For her entire life, Okina has been interested in art making. Her father–an artist and art professor at Hunan Normal University in Changsha, China until the coronavirus pandemic–introduced her to ink and watercolor painting when she was just five years old. But he made sure that she recognized the risky business of being an artist.

Ultimately, Okina pursued her art, attending Osaka Prefectural Kohnan High School of Design and Fine Arts, where she learned to paint with oils. After three years at the high school, she studied computer art and architectural design at Kyoto Institute of Technology.

“The good life in Japan means getting a good education, going to a good university and working for a good company. I felt a big discomfort about that, but I was a very serious person, so I just did it,” Okina says. “I was living a good life, but my heart was not filled with anything.”

In her pursuit of the “good life,” Okina began work at Nintendo, the Japanese video game company, in 2005. While there, she contributed character and map designs to flagship titles, including as lead designer on Super Mario Maker in 2015, her final project at the company.

Throughout her decade at Nintendo, she continued to paint, but found she wasn’t satisfied with her career.

“It wasn’t that bad. I still can do art, and I can survive,” she said. “But I think I always wanted to be [a] painter in the bottom of my heart. Because Japanese society is really difficult to make such a dream come true, I [did] it in a little bit different way.”

Okina spent the following few years moving from country to country, searching for a home where she could make it as a “pure artist.” Ultimately, in June 2019, she found her way to Sacramento, her husband’s hometown, where she discovered new art literally spilling into the streets.

“This town, the atmosphere, it looks like [a] pretty classic type of town, but you can find street art in any spot,” Okina said. “They are matching a new thing and an old thing really well, so I really like this atmosphere.”

A year after moving to Sacramento, Okina became depressed being stuck at home during the COVID-19 lockdown. So she began @everyday_runway, an Instagram account where she dresses up in vibrant provocative outfits to poses in front of the various murals in the city.

Through her love of the murals, Okina began to uncover the arts community behind them. Soon she caught the attention of Lin Fei Fei, who opened Lin Fei Fei Artspace in Wal Public Market in October and invited Okina to sell her work there. Okina will also exhibit work in a group show scheduled for mid-February.

Until that opportunity arrived, she and her husband had been working on an indie mobile game, released on Dec. 15, called The Creation, which has already been installed more than 10,000 times.

Fei’s offer is Okina’s first opportunity to have her artwork shared in a professional setting.

“I think, [for] a long time I didn’t have any opportunity like this, so I just didn’t have confidence. I don’t know if people liked my art or not, but recently I realized I am painting for myself. It’s not for other people,” Okina said.

Okina says her work had become rigid. Her training from an early age caused her to weigh more heavily the value of precision and realism, while suffocating her inner expressions. She feared “destroying the form,” but at the expense of herself.

Her recent work explores some of those themes. In a digital painting titled The Breath of Spring, a nude figure is bound by braids descending from her own head. An intricate and realistic butterfly is perched on the fantastically pointed ear of the bound woman.

Okina credits Sacramento and its artists for the transformation in her work and for her new sense of confidence in her art.

“Fei Fei gives me such [a] good opportunity, it’s changed my life 180 degrees,” Okina says through a growing well of tears. “This town and the artists of this town, changing my life. I always want to say thank you.”