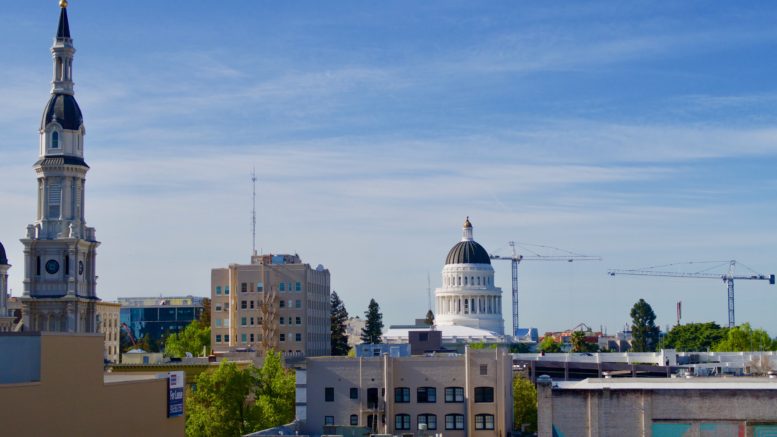 Last year, Sacramento City Hall was filled with people protesting Mayor Darrell Steinberg’s initiative to give Verizon Wireless access to the city’s communication infrastructure so it could install a network of 5G cell towers. But on April 7, the council didn’t have to face a crowd as it approved those plans.

The reason the City Council held a virtual vote where no objections were read aloud—and the justification it followed for pressing forward with the disputed 5G “roadmap” when residents couldn’t attend the meeting—was the coronavirus pandemic.

Now, critics are accusing Sacramento leaders of using the outbreak as a path of least resistance when making unpopular decisions.

Noah Davidson, head of the Sacramento chapter of 5G Awareness Now, isn’t among those advancing conspiracy theories about 5G towers causing the coronavirus. Since it began engaging with City Hall about the towers and antennas a year ago, Davidson’s group has centered its concerns around scientific announcements and studies.

At a meeting in September, the group implored council members to study evidence that includes a letter to the European Commission signed by 180 scientists and doctors from around the world citing concerns over how 5G radiation affects human brains, fertility and cancer rates, as well as a 2018 peer-reviewed article in the medical journal The Lancet, which indicated “serious biological and health affects” from prolonged exposure to 5G-type waves.

Since then, Scientific American has published an analysis by Joel M. Moskowitz, director of the Center for Family and Community Health at the University of California, Berkeley, stressing that there’s “no reason to believe 5G is safe.”

Throughout the discussion, every elected official and city staff member substituted the word 5G with the phrases “small cell tower” or “small cell antenna.” That even included when staff referenced a well-known 5G pilot program in the Pocket-Greenhaven area.

For members of the public watching remotely and unfamiliar with the controversy, they could have easily not known the vote involved 5G technology. Under ordinary circumstances, that clarification would have presumably been made by Davidson and others during public comment.

But there was nothing ordinary about public comment at the April 7 meeting.

“I know this has been a very difficult and complicated issue,” Steinberg said before the vote. “We’ve heard from a lot of constituents on this one.”

For those concerned about 5G health questions, the mayor’s acknowledgment raised an obvious question: Why pass a new telecommunications ordinance now, when the public is literally locked out of City Hall?

Davidson and others also wonder about what attention bandwidth Sacramentans can reasonably be expected to have during this unprecedented time. At the meeting, several council members shared concerns about the effects of  widespread unemployment, unexpected homeschooling, depression and isolation on the community.

But Maria MacGunigal, the city’s chief information officer, told elected officials those were the same reasons why they needed to pass the 5G plan right away.

“This item is of immediate concern, and it is needed now, as it governs how service providers develop critical infrastructure that supports essential functions for our community with the stay-at-home orders,” MacGunigal said, “such as essential city services, distance learning for students who are unable to attend school and remote work from home for many who live in the city.”

“I think that’s a great excuse for them not to listen to the public,” Frame told SN&R.

MacGunigal said that her team held several meetings with the public in hopes of crafting a compromise between 5G critics and telecommunications companies. “We’ve been trying to come up with a balanced perspective on this pretty contentious issue,” she told the council.

Sacramento Public Works Director Ryan Moore explained how those conversations factored into the new ordinance, which currently has provisions for how 5G towers should look and requirements for public notifications before they go up.

“We feel we’ve created a regulatory package which provides predictability and a level playing field for all applicants while also protecting the city’s interests,” Moore said.

Davidson paints a very different picture of the city’s outreach. He says officials only met with his group once and did not keep promises that his group could directly question the city’s paid consultant on 5G safety. Worse yet, Davidson says, the city showed his group an earlier draft of the ordinance in the fall that included mandatory setbacks to prevent 5G antennas from being placed directly adjacent to front yards—setbacks that were absent from rules eventually passed on April 7.

“The response to public concerns has been absolutely horrible,” Davidson said. “They were pretty set in stone from the start that they were going to go ahead with this and give the telecommunication companies a lot of leeway. Now there’s nothing to prevent that scenario where one of these antennas is installed in your front yard, pointed directly at your window.”

Public comment at the virtual City Council meetings has been limited to “e-comments” emailed to the city clerk. At the April 21 meeting, clerk Mindy Cuppy clarified that comments that come in after an agenda is posted are forwarded to council members the day of the meeting and posted on the city’s website. E-comments can also be submitted as the meeting is in progress.

City officials said this week that the clerk’s office is considering a phone-in method for comments in the future.

“Community input and feedback are a fundamental part of City Council meetings,” city spokesman Tim Swanson said in a statement. “Since the onset of the pandemic, the City has maintained the ability of the public to comment on Council items and other matters via its e-comment system. Moving forward, the City is working to launch a live phone-in service for comments, which we believe will better facilitate participation as well as public discourse.”

But that didn’t help opponents of the public-private partnership with Verizon on April 7. Davidson argues that, with the pandemic in full tilt, most residents didn’t even realize that 5G vote was scheduled. Nine people did file e-comments on the ordinance in time for the meeting. After the presentation from city staff, the clerk put those comments, on a single page, on council members’ computer screens.

“Maybe we ought to take a minute to look at them,” Steinberg suggested, learning forward. Roughly 14 seconds later he asked, “Alright, are there any questions from the council?”

There were not, and Councilman Rick Jennings immediately made a motion for a vote, which was seconded by Councilman Jeff Harris.

Concerns that public officials in California are leveraging the COVID-19 crisis to bypass critics aren’t limited to Sacramento. As recently reported by SN&R, Delta residents, environmental groups and indigenous tribes are the ringing the same alarm bell about the state Department of Water Resources trying to get approval for its proposed Delta tunnel during the pandemic.

Davidson said that fringe and baseless conspiracy theories about 5G should have made Steinberg and council members veer even more towards transparency. Davidson’s group is asking that the city’s April 7 vote be vacated.

“It has been a contentious issue for a year,” he said. “And for them to make the final vote in the shadows is certainly sketchy.”