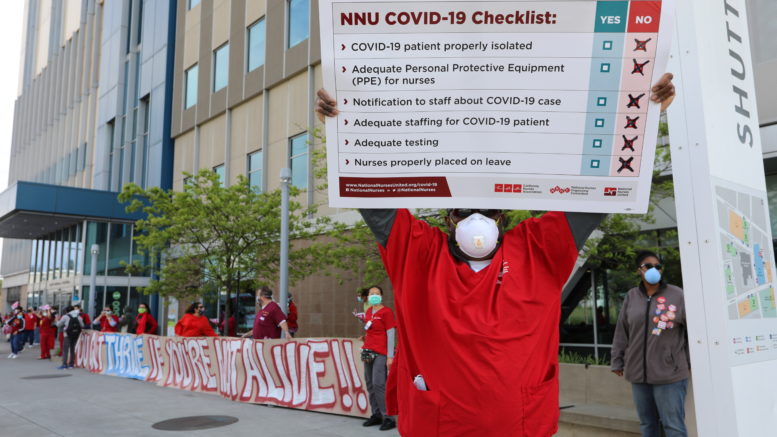 After the COVID-19 pandemic, will the economy be better for workers?

Nurses protesting for protective masks. Employees toiling on the production line well after meat plants become infection hot spots. Long-term care staff risking their lives to care for the elderly. Workers at the mercy of reckless governors reopening businesses while COVID-19 is still spreading in their states—and some states even threatening to take away unemployment benefits if they don’t return to the job.

During a deadly pandemic, we call them “essential” workers. But in normal times, many are not paid or treated like it.

So on International Workers Day 2020 on Friday, May 1, it’s a good time to think about what our economy will look like after the pandemic—and how we can make it fairer to workers.

The coronavirus crisis is making even clearer the growing gap between Americans who live paycheck to paycheck and company executives who can comfortably work from home. As we descend into what could be another depression, 30 million and counting are stuck in the bureaucratic nightmare of the unemployment system. And when some workers can make more in jobless benefits with the $600 weekly federal supplement, it just shows how many do not make a living wage.

A new analysis by the Kaiser Family Foundation says that these workers face “double jeopardy” during the pandemic because they’re more likely to lose income and more at risk of contracting the disease if they’re still on the job.

So it shouldn’t be too surprising that some workers at Amazon, Walmart and other major companies plan to strike on Friday to mark May Day, or that there’s a movement for a rent strike as well.

Some experts predict the pandemic will only worsen inequality in America, and some advocates are calling for a new New Deal—a massive jobs program, perhaps focused around clean energy.

Not enough aid has been targeted to working people in the four coronavirus relief bills totaling $2.7 trillion so far, says the Economic Policy Institute. It calls for unemployment benefits to be expanded to new workers, including young people finishing high school and college students, as well as undocumented workers. It says the beefed-up benefits should continue well beyond July 31 or any other arbitrary cut-off date, citing projections that the jobless rate could average 16% in the third quarter.

The California Budget & Policy Center warns that workers with low wages and less education, people of color and immigrants are at the highest risk of financial devastation. That’s because they were “locked out of the state’s prosperity well before the pandemic” and are overrepresented in the industries hit hardest by stay-at-home orders, including retail, food service, child care, janitorial services and hairstyling.

While 31% of Californians live in a household that includes a worker in one of these industries, 65% of workers in those industries are Latino, black or Asian, the center says.

A new analysis of unemployment claims in California found that 37% of workers with only a high school diploma have sought benefits, compared to only 12% of those with at least some college. The study by the California Policy Lab also found that younger workers make up a disproportionate share of initial claims.

The Budget & Policy Center is urging policymakers to support these workers who were struggling before the crisis, while not making existing economic and racial disparities worse. Among the ideas: further strengthen the state’s earned income tax credit, which was expanded this year so that a family earning less than $30,000 a year can qualify for as much as $8,000 in federal and state cash.

Others are also trying to help.

There’s a fund that provides $400 in emergency assistance for qualifying home care aides, house cleaners and other domestic workers. There’s another to aid gig workers and low-earning freelancers. And there’s a relief fund for farm workers. In the state Legislature, there’s a bill to help agricultural workers with expanded paid sick leave, hazard pay to cover increased health and child-care costs and temporary housing to reduce crowding.

All these stopgap measures are certainly justified. But they only treat the current symptoms, not the underlying problems.

Will we learn from this horrific crisis that when workers can’t afford to stay home and don’t have adequate health care, we’re all affected?

Be the first to comment on "Editor’s note: Workers unite!"