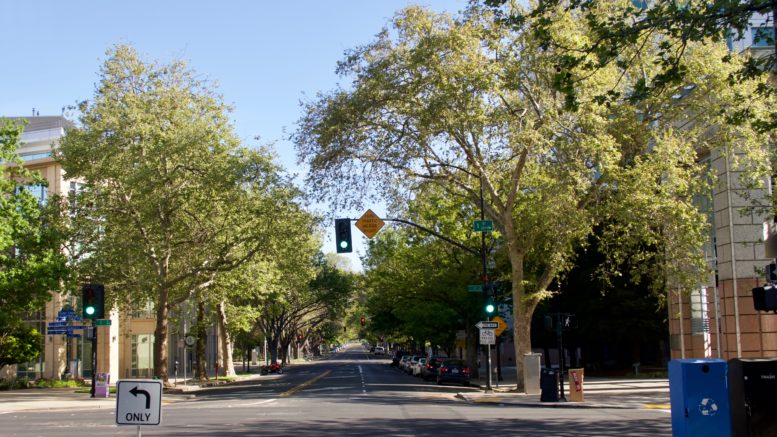 Critics point to company’s record of sharing customer data, environmental damage and stance against net neutrality among reasons to be skeptical of $100 million deal

Conservationists, consumer advocates and those concerned with digital privacy have the same question for Sacramento City Hall: “Can you hear me now?”

Sacramento leaders recently announced they’re taking a quantum leap into the future by joining forces with Verizon Communications. According to officials, their public-private partnership with the telecom giant helps bridge “a digital divide,” allowing them to spread wifi in local parks, improve traffic-control technology and start prepping for widespread 5G connectivity across Sacramento. Star Trek-like kiosks will also be popping up in the urban core, featuring wayfinding apps and interactive billboards. Under the terms of deal, Verizon will pledge $100 million into the city’s tech infrastructure.

In return, Verizon reportedly gets free access to the city’s available telecommunications infrastructure, totaling 101 small cell towers, while agreeing to build up that web of signals.

But Verizon critics have concerns about how the corporation got $100 million to throw around in the Capitol city.

In the last three years, Verizon has been roundly criticized for dropping cell coverage for rural-county users, selling customers’ online search data without consent and lobbying hard in Washington, D.C., against internet neutrality.

One of Verizon’s local cheerleaders, Mayor Darrell Steinberg, isn’t commenting on the company’s controversial record, though his office told SN&R the benefits of the Verizon deal are significant, especially for improving tech access in low-income communities. The city and Verizon have already began working on the fiber build-out for the project. The permitting process for various elements will soon be underway.

Yet in an era of financial activism through disinvestment, some think Sacramento’s partnership with Verizon only rewards and enables the company’s questionable tactics.

On October 27, the deputy inspector general at the U.S. Department of Interior received a complaint against Verizon’s activities in Yosemite from Public Employees for Environmental Responsibility, or PEER, a nonprofit alliance of state and federal resource professionals.

Based on information PEER says it discovered through Freedom of Information Act requests, its members are asking the inspector general to investigate whether the National Park Service violated federal laws by allowing Verizon to erect six cellular towers on Yosemite’s pristine vistas.

“From what we can tell, National Parks is improperly approving these towers, but also forfeiting dollars that are owed,” PEER Executive Director Jeff Ruch told SN&R, adding that the rent from outside cell providers using those towers appears to be going to Verizon rather than public coffers.

Ruch said his organization has also obtained Verizon’s pending permit requests for more cellular activity on the towers. Ruch thinks the blinking, techno-hive Verizon hopes to create in Yosemite will “bathe the remote back country” in a wash of 4G signals, allowing visitors to override outdoor sublimity with video streaming, music downloads and online gaming.

“In essence, they’re wiring the wilderness,” Ruch noted. “One of the National Park values is serenity, meaning the chance to be out of reach of the tendrils of technology, and it’s pretty hard to find serenity when someone’s in the area, blasting music they just downloaded, or online playing Pokemon.”

California Gov. Jerry Brown recently vetoed a bill that would have made it easier for companies to build 5G antennae towers in the state.

That concern is shared by George Whitmore, a board member of the California conservation group Unite the Parks. Whitmore thinks the towers could ruin the valuable escape from the deafening chaos of modern life that Yosemite offers.

“To some people, the issue is the physical structures, but that doesn’t concern me because the towers are pretty inconspicuous; but what does concern me is the impact to the users in the park,” Whitmore said. “If people want to haul this tech into the remote back country, they should keep it to themselves; but some don’t. It’s pretty in-our-face, and it’s pretty offensive.”

Whitmore added, “I don’t think [the National Park Service and Verizon] ever consulted anyone about it. There was no due process or public input—they just did it.”

Verizon spokeswoman Heidi Flato told SN&R that the rental financing on each Yosemite tower is unique, and her company uses revenues to offset its own costs. As far as how the towers affect the park, Flato said Verizon tries to strike a balance between back-country wilderness and “front country areas with wirelesss service for visitor safety and convenience.”

The Yosemite dust-up was far from Verizon’s only recent splash in national headlines.

Weeks before, news broke that the company was dropping cell coverage for some 8,500 rural-county customers in 13 states, spanning southern coal country to the beleaguered rust belt. Questioned by reporters, Verizon issued a statement saying “the roaming costs generated by the affected lines exceed what these consumers pay us each month.”

Demand Progress, an action network sponsored by the nonprofit New Venture Fund, began circulating a petition to Verizon CEO Lowell McAdam against the move, pointing out that darkening those 19,000 comm lines will only further harm distressed communities.

“Rural Americans are already grossly under-served when it comes to broadband and wireless service,” Demand Progress wrote in its petition, charging that Verizon had “offered unlimited data plans to lure new rural customers. But once Verizon realized the cost of data for these customers was more than they expected, they decided to cut them off.”

Over the summer, Verizon confirmed that a vendor mistake left the information of at least 6 million customers temporarily exposed on a publicly accessible cloud storage account. Verizon stressed that the breach was fixed before any identify theft happened.

While that faux pas was an accident, Verizon’s approach to customer privacy had been drawing fire for years. In March 2016, the Federal Communications Commission slapped Verizon with a $1.35 million fine for its secret use of “super cookies,” which allowed the company to track, share and sell their customers’ online activity data to third parties.

Ernesto Falcon of the Electronic Frontier Foundation, a digital civil liberties firm, said the fine hasn’t changed the way Verizon does business. Quite the opposite, he says.

“There is an effort, spearheaded by Verizon, to curtail any federal or state privacy laws that regulate their conduct,” Falcon told SN&R. “They’re also asking the FCC to block the states from passing new laws to protect the privacy of their constituents. … They’re clearly wiping all the rules and obligations to protect individual privacy, and they wouldn’t be doing that if they didn’t have a larger agenda.”

Verizon’s critics also emphasize the company has a bad track record on internet freedom and open markets: A recent study released by MapLight reported that Verizon—along with Comcast, AT&T and National Cable & Telecommunications Association—has spent, collectively, more than half a billion dollars since 2008 on lobbying for the death of net neutrality.

Net neutrality is the principle that keeps larger internet service providers, or ISPs, like Verizon from creating a “pay-to-play” landscape on the internet, where only companies that dish out the most cash enjoy the best flow of internet traffic.

“When I hear city of Sacramento, I’m skeptical, but when I hear Verizon, I’m extremely skeptical,” Meinreith said. “Net neutrality is really a defensive battle, because people need to know it’s what we already have; but what we need is a new term for what the lack of it would be—internet censorship.”

Mayor Steinberg declined to be interviewed for this story, though his deputy chief of staff, Kelly Fong Rivas, said in email that the new Verizon deal will improve traffic flow and safety on the roadways, as well as extend free wifi into public spaces where residents of all income levels can access it.

“Addressing the digital divide and gaining the resources to increase safety across the city was a big motivator for us,” Rivas wrote.

Congresswoman Doris Matsui also supports the deal, saying that it creates a path for “a smart, connected city.”

Barry Broome, CEO of the Greater Economic Council of Sacramento, called the partnership “a key factor” in planning for the city’s financial future.

But for critics like Meinreith, those are just lazy platitudes for a corporate handout to a company that’s “already building a monopoly,” he said.

“It’s not good, but it’s not new,” Meinreith said of the city’s approach to Verizon. “They think that job creation is doing whatever a business asks you to do.”

Be the first to comment on "Verizon deal will bring 5G network to the capital city—but at what cost?"