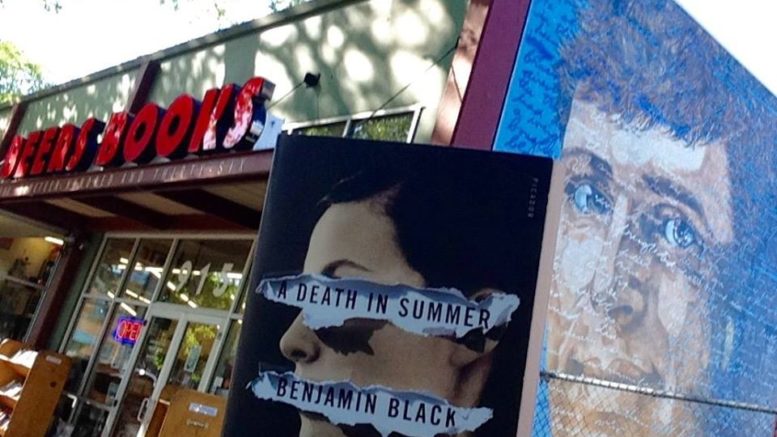 In exploring the life of author C.S. Lewis, who saw the imaginative possibilities in books even during his moments of suffering, the playwright William Nicholson observed, “We read to know we are not alone.”

That line from Shadowlands speaks to how the written word connects people across time and space, building empathy, prodding curiosity and illuminating insights into ourselves and others. And, during this long span of locked-down isolation, the line also hints that books aren’t just a stimulating way to pass the time, but a bridge back to feeling a little more human.

Nowhere is that more recognized than independent bookstores. A decade ago, market researchers were ready to declare these scrappy little operations dead. Many were surviving on paper-thin margins. All were swimming against a riptide of digital entertainment.

But independent book sellers began to thrive in post-Great Recession America by mastering features that were beyond Amazon’s network: They hosted more author events, organized growing book clubs and kept a laser focus on customer and community engagement. Revenues stabilized across the industry, to the point where a spate of new indie stores opened in 2018.

Now, as the COVID-19 pandemic devastates small businesses, it is hitting independent bookstores especially hard, even as the appetite for reading increases during the multi-month stay-at-home order. Once again, some in the media are speculating that these little clusters of culture and enlightenment are about to become extinct.

But the family-owned shops around California’s capital aren’t ready to give up. SN&R spoke with a number of owners, rounding up what services they’re still offering as they attempt to navigate the pandemic and protect the transporting doorways they’ve created for customers.

On April 16, The New Republic published an article titled, “Is this the End of the Indie Bookstore?” It was a bleak headline to run on the same month as national Independent Bookstore Day. The challenges of this moment for indie booksellers are real and daunting.

At Time Tested Books, a Sacramento fixture for 31 years, revenues are down by roughly 50%, according to manager Finian Scott-Small.

Popular for its diverse, well-organized and highly curated selection of used books, the store also sells new books, which became important after the virus outbreak. With loyal customers not allowed inside the store, many have been ordering their new books directly through Time Tested rather than bigger online retailers.

“We’re glad people are ordering through us, when we know they could easily order off of Amazon,” Scott-Small said. “When I talk to a good chunk of those people, they’re clearly doing it because they want to support our business.”

While selling the latest releases helps, the store actually has a higher profit margin on its used inventory. For that reason, Time Tested is currently offering curbside pickup for phone purchases. Scott-Small is typically at the Midtown store Monday through Friday between 1 to 5 p.m. He says that customers can call him with lists of used books they’re searching for, and he’ll call back with which titles are in stock and drop them in the mail or schedule pickup.

“We’re glad people are ordering through us, when we know they could easily order off of Amazon.”

Recently, Scott-Small also began taking high-resolution photographs of random bookshelves in the store and posting them on Instagram—the best substitute he can come up with for what’s hurting the store the most.

“The difference with what’s happening now is people can’t come into our space and just get absorb by it,” he said. “That kind of browsing leads to people sometimes buying ten books when they really only came in for one. It’s just discovering those things they didn’t know they were looking for until they found it.”

For years, the Sacramento area has been a fly-over territory for major author events. An independent bookstore in El Dorado Hills has been working to change that.

Face in a Book spent the last eight years turning its store into a community hub by organizing six book clubs, a writers’ coffee house meet-up and a variety of reading events for children. Lately, owner Tina Ferguson has gained notice from publishers for the hundreds of fans drawn by the off-site events Face in a Book hosted for the likes of Jeff Kinney, Christian Robinson and Neil Patrick Harris.

On the eve of the COVID-19 outbreak, Face in the Book was scheduled to host talks from New York Times best-selling authors James Rollins and Max Brallier. Those dates had to be canceled, and Ferguson can’t picture what her bread-and-butter events might look like in the near term. Not only has the lockdown caused sales to drop by 40 %, she had to lay off her staff, all book-lovers who prided themselves on connecting with customers.

Ferguson applied for a federal Payroll Protection Program loan in hopes of bringing back her employees. When it was announced that best-selling suspense writer James Patterson was contributing $500,000 to the new #SaveIndieBookstores campaign, Ferguson applied for a grant from that fund, too.

“As an owner, I want to keep being there for my community and for my employees, but it’s really become about wondering when this will all be over.”

Tina Ferguson, owner of Face in a Book in El Dorado Hills

But as Ferguson waits for possible financial relief, she’s trying to use the store’s social media following to stay in business. That includes posting weekly Facebook videos called Tuesday’s Teasers, in which Ferguson walks customers through some of the most interesting new releases. Viewers can then order those titles through Face in a Book’s website and get them in the mail or by curbside pickup.

Also, the staff at Face in a Book have been posting “What we’re reading now” videos to keep literary conversations going. The store has even partnered with neighboring restaurant Milestone on its promotions, with Ferguson giving the dining house advance reading copies of new titles, which Milestone’s cooks can then add to take-out orders.

“It was basically, ‘Hey, grab a burger, get a book,’” she said. “One day, I posted photos of all the different puzzles we had in the store on Facebook, and then we sold out of every puzzle within 24 hours.”

While positive messages have been flowing in through social media, Ferguson thinks the messaging from the state government has been less clear—and extremely vexing while trying to run the store during lockdown.

“As an owner, I want to keep being there for my community and for my employees, but it’s really become about wondering when this will all be over,” she said. “We’re not deemed essential, so we’re not allowed to really be open, but that makes it difficult to receive shipments of books, if the direction implies we’re supposed to not be at the store. I feel like it’s a Catch-22: Not being considered essential is killing us.”

If Andy Naify ever had any doubts about what his family’s bookstore means to the residents of Sacramento’s Southside Park, the first days of the pandemic certainly removed them. As news broke that Beers Books was forced to close indefinitely, hundreds of longtime customers bought gift cards.

“We just have a huge amount of gratitude for the hundreds of people who went deep into their wallets for gift cards. That short-term bump was huge,” Naify said. “It was basically like giving us a loan to meet our immediate expenses for the month.”

Like Time Tested Books, Beers is known for a wide-ranging and carefully selected bulwark of used books, in great condition and at fair prices. It also offers a smaller selection of new books through its national distributor, which offers a lifeline when sales are down by nearly 80%. While Beers has opted not to do curbside pickup so far, Naify is processing orders for any new books on the market or used books in the store. People can phone in their orders on weekdays between 11 a.m. and 3 p.m., but Naify is asking customers for a little patience.

“The postal system is just so jammed up right now, and it’s not looking good for them,” he said. “We’re seeing books that we sell take two weeks to travel just five blocks from our store. It’s crazy. But on the other hand, Amazon’s books are taking longer than ever to arrive lately, too.”

Every independent bookstore in the region is trying to find its way. According to its website, Sacramento’s Avid Reader on Broadway, which sells new books, is allowing customers into the store with social distancing. It will also mail any book purchased by phone that costs $15 or more. The Avid Reader in Davis is taking orders by phone and email and mailing purchases.

The city’s newest indie store, Capital Books on K Street, is selling books through its website and then offering shipping or curbside pickup.

One silver lining for Beers Books is that it just received a Payroll Protection Program loan, something that’s eluded many small businesses in California, according to Gov. Gavin Newsom. Naify says the money should allow him to get his entire staff working again. He knows that won’t necessarily equal a rise in sales, but it could help as Beers Books redoubles its efforts to connect with customers on social media.

“So far, the engagement has been truly surprising on that front,” Naify said. “Because of that, I think when we do reopen, we’ll see a fresh kind of energy.”

He added, “And we’re really grateful to weather this storm.”

Sacramento should prepare for a COVID death wave

Be the first to comment on "Sac’s independent bookstores try to soldier on, survive the lockdown"