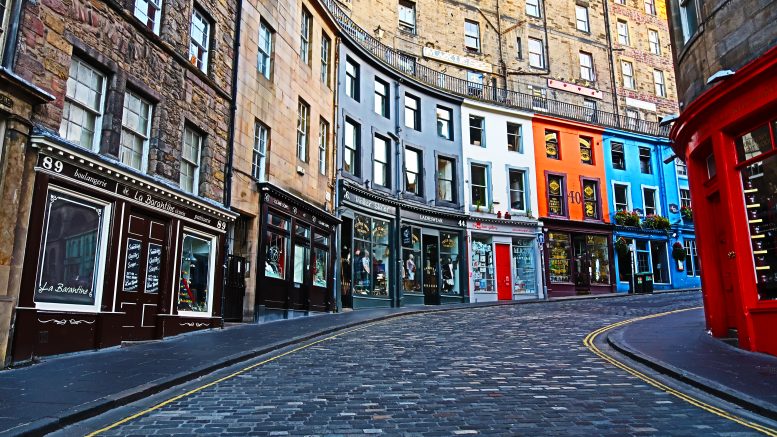 Scotland's capital of Edinburgh is the setting for Ian Rankin's novels. Photograph by Scott Thomas Anderson

I first learned of Scotland’s literary shadow weaver while strolling down Edinburgh’s Young Street in 2015. I’d noticed a group hovering around an aged, half-anonymous establishment called the Oxford Bar. Soon, I learned the visitors were peering inside the pub in hopes of spotting a man that they knew didn’t actually exist: Detective Inspector John Rebus, a hard-drinking, chain-smoking, bloodhound-like member of Edinburgh’s murder police.

Within the fictional world the sleuth inhabits, the Oxford Bar is his main nighttime haunt. And while it may be impossible to find Rebus in the 200-year-old tavern, catching a glimpse of his creator—Ian Rankin—drinking there is a better bet. Over three decades and 23 novels, Rankin has become the undisputed heavyweight of Scottish crime writing. The year I first noticed fans retracing Rebus’ weary footsteps through Edinburgh, Rankin’s novels accounted for 10 percent of all mystery sales in the United Kingdom.

A few months ago, I was back in Edinburgh, and this time even more people were hanging around the Oxford Bar, dreaming of spotting Rebus—and hoping for a run-in with Rankin.

Part of Rankin’s growing appeal is that his tales are fixed in the grittiest reality. His drug dealers and street toughs practically breathe down the reader’s neck. His knowledge of genuine police procedure is all but encyclopedic. Rankin’s latest novel, In a House of Lies, stays relevant by touching on the strains of corruption that have surfaced within law enforcement agencies on both sides of the Atlantic. Its story hinges on Rebus trying to solve a cold case from earlier in his career while also confronting a long-festering rot within his department.

As someone who’s worked as a newspaper crime reporter for more than a decade, I wanted to know how Rankin did his research, especially in those early years. I recently caught up with him in San Francisco and was finally able to ask.

“When I first started writing the books, my idea of research was to write to the chief of police in Edinburgh and say, ‘Can you help me?’” Rankin remembered. “And he sent me to a police station to talk to two detectives … I gave them the plot of my first Inspector Rebus novel, which turned out to be quite close to a case they were working on. So, I became a suspect in a murder during my first attempt at research. After that, I didn’t do any research for ages, because I didn’t want to get in trouble with the police.”

Rankin added, “But then cops locally started to read and enjoy the books. … So, I thought I really owed it to professionals to get the fact of their jobs right.”

I could see Rankin’s commitment to detail was akin to that of the few crime reporters who remain in Sacramento. But there’s another element to his novels that feels authentic: Over time they’ve increasingly featured a second character, Siobhan Clarke, who many fans believe is among the best female detective characters. Given that some of the biggest cases I’ve covered were cracked by women—including Placer County District Attorney’s Office investigator Mary Green—I wanted to ask Rankin if Siobhan was based on a real person, and what he thinks she’s come to mean to his Rebus books.

“In the early Rebus books, there aren’t any strong female characters because I didn’t feel like I could write from a female perspective,” Rankin reflected. “But once Siobhan came into the equation, she grew in confidence—again, I was talking to women cops—and now I think she’s as important to the series as Rebus … He sees the world in terms of absolutes, good and evil; and she sees that there are grey areas in the middle, and tries to show him.”

It was good to hear that Siobhan wasn’t going anywhere, but another class of character might be, and that also comes down to the author’s real-world reflections. In a House of Lies contains meditations on the fate of Edinburgh’s newspapers, including the fact that the Scotsman is down to its last professional crime reporter. Like most real cops, Rebus has a conflicted relationship with journalists. However, faced with them possibly disappearing altogether, the detective comes to worry about the alternative.

Is Rankin concerned that the retraction of independent reporting will affect crime novelists?

“Without long-form journalism, without proper good investigative reporting, a lot of huge crimes of the past would have gone unnoticed,” Rankin observed. “And I’m fearful that a lot of big crimes in the present, and in the future, will now be things that people get away with.”