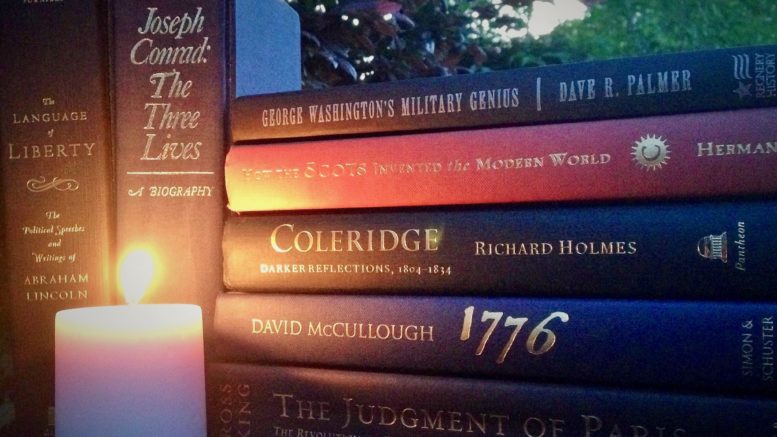 With Independent Bookstore Day approaching, follow the region’s most successful authors through the stores they call second homes

It’s a quiet afternoon at Avid Reader in Davis. A handful of tome-hunters mill noiselessly—almost suspiciously—along the bookstore’s neat shelves. The door opens, and Catriona McPherson casually walks in, holding a purse and a tartan hat stitched to a frayed red wig.

A native of Scotland, the award-winning author is just back from Vancouver, where she won the Left Coast Crime award for best humorous mystery of 2019. At the moment, though, her main concern is getting the gaudy “jimmy wig” to Avid Reader owner Alzeda Knickerbocker so it can decorate an upcoming Scottish-themed book event.

Since moving to Davis in 2010, McPherson has found Avid Reader to be a second home. She says it fosters camaraderie, and knows the highly selective events that Knickerbocker hosts are vital to the literary scene.

The public may be waking up to that: Recent data from the American Booksellers Association shows that, while other brick-and-mortar establishments are crumbling, indie bookstores are making an astounding comeback. The timing of their recovery couldn’t be better in a world where technology is putting a kind of accelerated pressure on how we communicate. From Twitter and Snapchat to texts and bullet-blurbs, the trend toward ultra-abbreviated writing could have long-term effects on society’s expressive impulses.

Has a back-sliding shadow begun to fall on what’s truly magical about language?

Lovers of the written word, or even of critical thinking, are hoping the answer is “no.” And some of their best allies are independent bookstores, especially ones using interpersonal relationships and live events to urge people into the mystery of language. These little businesses still face threats in the digital age, but region’s best-known authors are right by their side.

Independent Bookstore Day on April 27 is a chance to decide if you are, too.

The launch party that Avid Readerrecently threw for McPherson’s novel, Scot & Soda, was lively, breezy and full of laughter. Fans came out to hear McPherson talk about the new adventure of her character Lexy Campbell, a Scottish ex-pat living in a California college town that resembles Davis. Campbell is a jaded marriage counselor who brings a blunt Caledonian cut to her advice. McPherson read an inner monologue from the character and put the crowd in stitches by delivering it with a Twainian touch peeking through her Scottish brogue.

She knows the critical establishment generally doesn’t treat humor writing or the mystery genre as serious literature, but fans were avid about how much they enjoy the journey McPherson takes them on.

“Sometimes I will get people who say, ‘Do you think you’ll ever write a proper book,’” McPherson says. “And another pitfall is those writers who problematize the genre and think they’re oh so clever—and they just don’t tie things up—but then they cast that as something above what we mystery writers do.” Smiling, she adds in a mock drawl, “We lowly practitioners of the fair play puzzle plot.”

McPherson had a successful career spinning those story lines before she moved to Davis, where her husband took a teaching job at the University of California. She says the staff at Avid Reader were among the first to welcome her with open arms.

“They’ve supported me since I came off the boat and didn’t know anyone,” she recalls.

“It’s very exciting,” Knickerbocker said of the turnout for McPherson. “This was a community event, but it was around writing, and not only that, it was around successful writing.”

The Davis festivities weren’t the region’s only early spring get-together. On March 9, Face in A Book in El Dorado Hills held a bustling launch party for Claire Booth’s new novel, A Deadly Turn.

Booth is a former newspaper crime reporter for the Contra Costa Times. In 2008, she turned the case of a homicidal cult leader from Concord into a true crime enigma called The False Prophet. After that book’s release, Booth began writing fiction. She created a series of police procedurals set in the ‘70s-chic country music netherworld of Branson, Missouri. The books follow an elected sheriff named Hank Worth, and some of their originality stems from the trends and tropes Booth isn’t trying to copy.

“He’s not an emotionally tortured protagonist or brooding seeker who’s dealing with a battered past,” Booth admits. “I wanted him to be more of a normal guy. I thought that would be more interesting.”

Worth’s relatablility gained Booth a national audience. Now that she lives in Fair Oaks, she considers Face in a Book her “home bookstore.” Booth says owner Tina Ferguson and her team have done a stellar job hosting events that get kids and teens interested in reading.

“I like how specifically independent bookstores can tailor themselves to the needs of their community,” Booth says. “And from a reader’s perspective, they don’t have any corporate overlord dictating what their stock is going to be, and what they have to display.”

Ferguson opened Face in a Book in 2012, not long after Borders Books in Folsom met its unceremonious demise. Ferguson saw that as a sign that neighborhoods needed a space for written culture and creativity to thrive. Today, Face in a Book runs six book clubs, a writers’ coffee house meet-up and some of the biggest literary events in the Sacramento region.

In 2016, it hosted Diary of a Wimpy Kid author Jeff Kinney and sold-out 1,400 seats at an off-site venue. During its Independent Bookstore Day celebration on April 27, it will host former Pixar illustrator and famed children’s author Christian Robinson.

While Ferguson’s events are putting Sacramento on the map for literary tours, she says the role her store plays in everyday lives is the most rewarding part of the journey.

“People might think of a bookstore as a retail establishment, but it’s really so much more to so many people,” she notes. “It’s a place where readers can connect with others, a place of discovery; and we have a lot of customers who have become like family to us now.”

Be the first to comment on "The mind’s independence day"