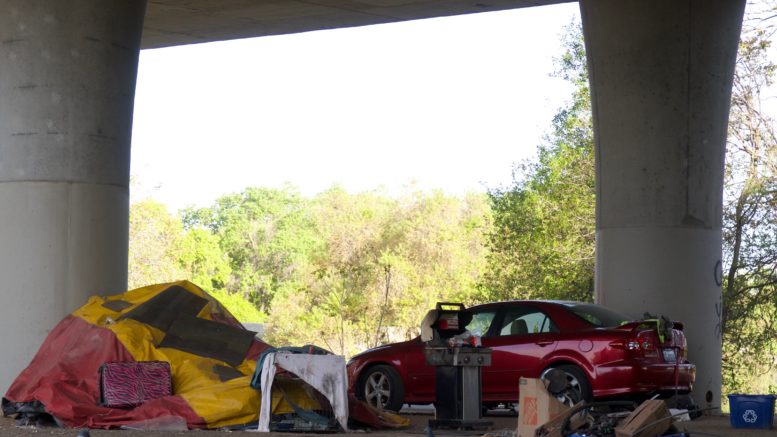 Last week, Sacramento Mayor Darrell Steinberg stood by Gov. Gavin Newsom in front of a motel that had recently been converted into a homeless shelter. The leaders were unveiling their plans to try to stop COVID-19 from spreading like wildfire through the countless encampments along California’s fields and rivers.

As Newsom and Steinberg spoke, the cause of their worries was on full display in another part of the city: the streets of downtown were virtually empty, with the glaring exception of dozens of unhoused people clustering in Caesar Chavez Plaza.

The levels of physical distance and sanitation needed to stay safe from COVID-19 often aren’t realistic for many individuals living on the streets. Now, state, county and city officials are scrambling to give them a place to go. It’s a response to what Newsom calls “the crisis that pre-dated the current crisis.”

The governor and mayor were announcing a first-of-its-kind program in the nation called Project Room Key. Partnering with the Federal Emergency Management Agency, California will receive a 75% reimbursement as it takes control of some 15,000 hotel and motel rooms to house people living outdoors during the virus outbreak. FEMA agreed to pay most of the cost on the condition that the rooms are going to unhoused individuals who have tested positive for COVID-19, been exposed to the highly contagious virus or are at higher risk of dying from it because they are older than 65 or have an underlying health condition.

“That’s the bucket for reimbursement that FEMA advanced, and it’s all about saving lives,” Newsom said.

In Sacramento County, the latest Point in Time Count found that one in five people experiencing homelessness are older than 54 and 75% has a disability or health condition.

As of last week, California had reached occupancy agreements for 7,857 hotel and motel rooms. Newsom said California would also be deploying an additional 1,300 FEMA trailers to cities and counties that could provide sites and supportive services.

The city of Sacramento has already jumped on that offer. On April 6, Steinberg detailed how a joint homeless response team from the city, county, Sacramento Steps Forward and the Sacramento Housing and Redevelopment Agency will handle Project Room Key. The $15 million plan involves adding 80 beds to the county’s existing shelters to provide more space for physical distancing, maintaining 60 FEMA trailers at Cal Expo and leasing 850 hotel and motel rooms. Also, some $1.2 million will be spent on meals and sanitation to people living in outdoor encampments. The city and county would initially draw the $15 million from California’s new homeless assistance emergency fund, with the fund later getting a three-quarter reimbursement from FEMA.

“Who will be prioritized for these beds? There is a clear prioritization set by the county and their health authorities,” Steinberg said during his daily Facebook Live coronavirus response update. “And first on the list are those who have tested positive for COVID-19 of any age. Secondly are people who are under a medical or public health investigation, pending a test. Then the criteria goes to those who are symptomatic and older.”

On April 7, the Sacramento County Board of Supervisors approved the plan, followed hours later by the Sacramento City Council. During the council meeting, Emily Halcon, the city’s homeless services coordinator, said that figuring out whom to house first will be a fluid situation in the early stages.

“You can’t just put the homeless population indoors and then walk away. That doesn’t work. It takes service provision. And if we don’t have adequate service provision, this will be a failed experiment.”

Vice Mayor Jeff Harris stressed that the city and county have to make the most of additional federal money, adding that successful wrap-around services and rapid re-housing will be critical.

“You can’t just put the homeless population indoors and then walk away,” Harris said. “That doesn’t work. It takes service provision. And if we don’t have adequate service provision, this will be a failed experiment … We need to capitalize on this opportunity.”