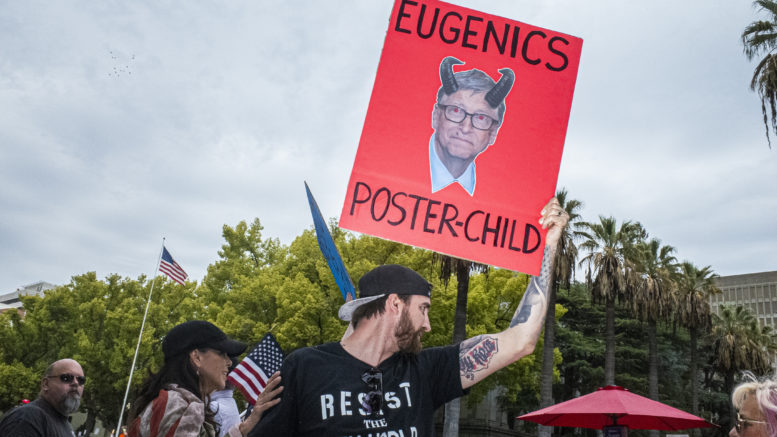 A demonstrator feeds the internet conspiracy that billionaire Bill Gates has something to do with the coronavirus epidemic during an April 20 rally outside the California state Capitol. (Photo by Karlos Rene Ayala)

Like too many of us, the main figure of this story starts with a conclusion and then works her way backwards to justify it.

For “Meaghan,” a Rocklin chiropractor who posts time-lapsed videos of her home workout routines and fortifies her young daughters on probiotics and kombucha, the conclusion is that the global coronavirus pandemic is overblown.

(“Meaghan” isn’t her real name. Even though this information is public on social media, she isn’t a public figure and hasn’t responded to an interview request. Also, this isn’t going to be flattering.)

Meaghan is one of about a thousand people who demonstrated outside California’s state Capitol this week against a stay-at-home order that is stretching into its second month. Similar crowds have gathered outside lock-downed state houses around the country, riled up and bidden by pandemic profiteers, Trump apologists, conspiracy hams, medical “entrepreneurs” peddling junk science in store-bought lab coats, loud-talking contrarians and confident fools who spew their delusional improv without a trace of self awareness or shame.

For them, there is no difference between correlation and causation. For any two points in all of existence, there is a YouTube video breathlessly laying out the “shocking” connection.

Meaghan’s Facebook page (at least the portion that’s public) is spattered with fringe hypotheses, including two (two!) videos accusing billionaire Bill Gates of engineering the COVID-19 crisis so he can make a killing off the cure. One features a man wearing too much hair gel and a baggy suit seated at a cheap-looking “news” desk as he “interviews” a “doctor” who blames Gates without—what’s the word?—evidence. Honestly, it looks like the setup for an adult film.

Meaghan sides with these naysayers. She presents herself as an unapologetic “natural parent” (code for: vaccinations cause defects) who believes that “bacteria and viruses are the way that we build our immune system.” Never mind that the United Kingdom briefly tried exposure therapy with disastrous results, or that virologists still don’t know whether recovering from COVID-19 transfers any longstanding immunity; Meaghan is a suburban chiropractor damn it and who would know better about how this contagion behaves?

“I cannot stay quiet anymore!” she posted to Facebook on April 20. “Our rights and freedom are being taken away. It’s like this slow trickle and I cannot just sit on the sidelines.”

Meaghan posted a photo of herself that day, because that’s what people do. It’s filtered through a “vivid cool” lens, because real life can no longer be unadulterated. In it, she stands on the Capitol’s front lawn, sharply in focus; the chalk-white and columned fortress of our secular chapel blurs in the background. She presents a cardboard sign that reads “#MASKOFF.” Beneath oversized sunglasses, Meaghan flashes a satisfied, naked smile.

It is the smug face of our doom.

I don’t mean to single out this one person. There are many “Meaghans.” The Reopen California Facebook group has raced past 90,000 members. And more “freedom rallies” are planned in Los Angeles, Orange County, San Diego, Encinitas (where a “Shred the Tidalwave of Tyranny” beach party is scheduled) and San Luis Obispo.

I try to remember that real economic desperation underpins at least some of these belligerent voices.

As a technically laid-off journalist working on borrowed (half) time, I sympathize. But, as a Pew Research Center survey reminded me, America is still home to a majority of grownups—people who understand that our collective situation sucks, but also realize that extreme measures are needed to contain a plague that wants to drown us in our own lung fluid.

These folks are also stressing over their mortgages, their jobs, their kids, their frozen-in-time social lives—they’re just not whining so much.

Police estimate that 1,000 people assembled outside the Capitol on April 20. It’s important to note that these squeaky wheels had government help to decry the government.

Like it did four years ago to white supremacists, the California Highway Patrol granted a permit to organizers despite advanced warnings about the risks. The CHP pulled the plug on issuing permits once it became clear that California’s self-styled liberators didn’t obey physical distancing requirements, increasing the possibility of spreading infection. As a result, only a few, paltry scraps of outlaws—numbering 15 in all—returned two days later. Police reported no arrests.

Being stupid may be dangerous, but it isn’t illegal. And there’s no vaccine for it.

Not that these people would take it anyway.