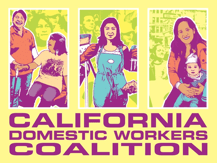 While many white-collar workers are finding ways to work safely from home during the coronavirus pandemic, others can’t avoid public places and keep their paychecks.

That’s why federal health officials are urging Americans to wear face masks on trips to the grocery store or pharmacy, and why Los Angeles is making that a requirement starting Friday.

Then, there are those whose entire job is based on personal contact—housekeepers, caregivers, nannies and other domestic workers in private homes.

Wednesday, a statewide coalition launched a campaign to pass a bill to bring more than 300,000 domestic workers in California under occupational safety and health protections.

The coalition says that domestic workers are on the front lines during the COVID-19 crisis because they’re helping some of the people who are most vulnerable to the virus. And without the Occupational Safety and Health Act, they’re among those who have to choose between working in unsafe conditions or not getting paid, the coalition says.

The noon press conference—a virtual one on Zoom and Facebook Live, of course—is in support of Senate Bill 1257.

And it comes the same day as the Economic Policy Institute released a new report warning that many of the nation’s 2.2 million domestic workers are experiencing a “devastating loss of income.” More than half of those surveyed by the National Domestic Workers Alliance had no job for the week of March 30, and that figure rose to 68% the following week, according to the study.

Many of those still on the job are risking their health because they don’t have adequate protective equipment, even though they are helping families follow guidelines to prevent the spread of coronavirus and are caring for the sick, elderly and disabled, the EPI report says.

The pandemic, the report says, is making the situation worse for this already vulnerable workforce—91% of whom are women, 57% Hispanic, black or Asian and 35% immigrants.

Domestic workers have largely been excluded from the protections of state and federal labor laws. Isolated workplaces, gender and racial discrimination and language barriers make them even more vulnerable.

It wasn’t until 2014 that California granted overtime pay to some domestic workers; previous bills to end their exclusion from OSHA protections have failed.

During the coronavirus pandemic, there has been a lot of attention on the need to protect nurses, doctors and other health care workers in hospitals—and rightly so. Advocates are saying don’t forget about domestic workers.

Be the first to comment on "Not safe for work"