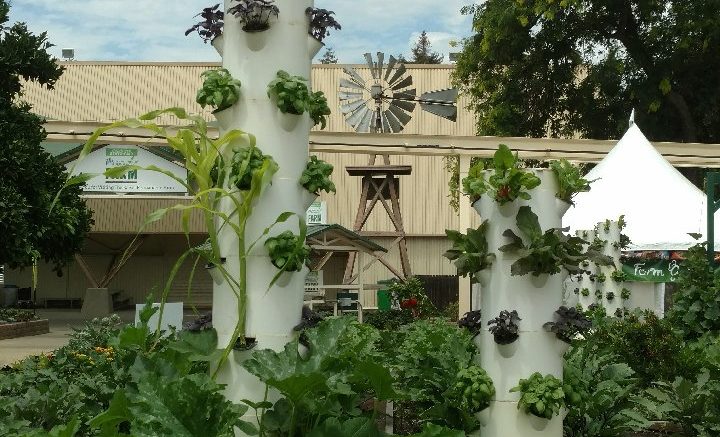 Plants grow on air (mixed with moisture and nutrients) in The Farm’s aeroponic tower gardens at the 2018 California State Fair. (Photo by Debbie Arrington)

One place at the State Fair stays true to agricultural roots

How does a kiwi grow? What do hops look like on the vine? Can strawberries live on air?

Find the answers down on The Farm.

Tucked behind Building B at Cal Expo, The Farm is a lush, 3.5-acre oasis away from the midway and food booths. But more than any other exhibit at the State Fair, it demonstrates best where our food comes from.

As the California State Fair celebrates its 166th summer, one sliver has remained true to its agricultural roots: The Farm shows off the bounty of California.

The State Fair opens Friday, July 12, for a 17-day run. Unlike many other exhibits, The Farm is tended (and visited) year round. It’s a favorite destination for local school groups. Each year, it also produces about 10 tons of fresh vegetables and fruit for Sacramento area food banks. Most of the harvest will be picked after the fair closes July 28.

The appeal of The Farm is easy to understand. In its compact demonstration gardens grow about 90 different California crops, including apples, artichokes, watermelons and zucchini. Wine grapes, grains, vegetables, dwarf fruit trees, herbs and more create a walk-through sampler of the state’s ag diversity.

First planted in 1984, The Farm started as an educational exhibit to teach city folks who had never seen a tomato on the vine about how food is grown. The tomatoes still earn oohs and aahs, but now they come in at least 12 varieties and in yellow, orange, green, purple and black as well as red.

Over the decades, more crops were added to the mix and became their own Farm landmarks. For example, the gnarly and twisted kiwi vines have grown thick as tree trunks. Beneath their overhead trellis, their weird fuzzy fruit hangs down in clear view amid the thick (and welcome) shade.

In recent years, The Farm has morphed into a primer on drought tolerance and low-water gardening as well as sustainability. A display garden outlines step by step how to replace a lawn. Good bugs buzz away in an insectary devoted to pollinators. Coming this season: Interactive ag exhibits that allow patrons to get the feel of farming (and selfies, too).

Want to grow your own beer? Check out the hops climbing up the arbors. Love salsa? See peppers, tomatoes and onions in abundance. And take home some recipes.

During the fair, more than 100 UC Cooperative Extension master gardeners staff The Farm’s question booth. Got a pest dilemma or a mystery plant? They’re ready to tackle all sorts of garden issues.

Some of the most popular recent additions illustrate ways to grow more food in less space with fewer resources. Vertical gardens, the 6-foot aeroponic towers, use pressurized air to push water and fertilizer up a central column; that moisture steadily mists plant roots. According to its developers, these towers can produce 30 percent more food with 90 percent less water in 90 percent less space—and no soil.

Yes, strawberries—and tomatoes—can live on air (if it’s mixed with moisture and nutrients). See for yourself at The Farm.

Be the first to comment on "Down on the farm"