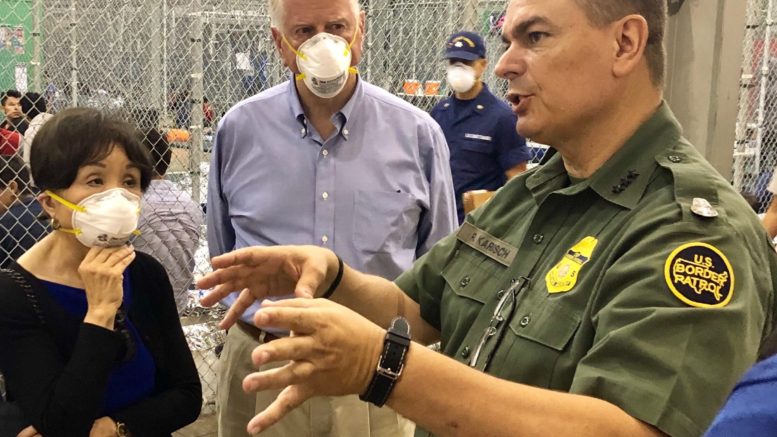 Rep. Doris Matsui of Sacramento, left, was one of 20 congressional Democrats who visited Border Patrol stations and processing centers in McAllen and Brownsville, Texas on July 13-14. (Photo courtesy of Rep. Doris Matsui's office)

Having traveled last weekend to investigate detention facilities with my Democratic colleagues, I can confirm just how out of touch the president is.

We visited the “Ursula” Central Processing Center, in McAllen, Texas, where you can hear the cries of innocent children as you enter the converted warehouse.

Once inside, I saw children in fenced cages. They had hives and rashes and were exhausted. There was a baby suffering from the flu who could barely lift its head in their father’s arms.

We met unaccompanied children who had heartbreakingly memorized the names, addresses and phone numbers of family members to contact once they reached the United States. But instead of being reunited with their families, they are being held under lock and key in a cage.

I was sickened by what I saw—not only as a mother and grandmother or as an American citizen born in an internment camp, but as a decent human being. We should all be disgusted by the trauma inflicted upon children at facilities run by the U.S. government.

And at the McAllen Border Patrol Station, what I saw was equally inhumane and un-American.

With 40 migrants crammed into a cell, there was no room to move. Under the law, U.S. Customs and Border Protection is only allowed to detain migrants for 72 hours, but I met people who have been there as long as 60 days.

While detained, everything migrants do is in that cell—eat, sleep or use the restroom. The cells do not have showers or drinking water. Customs and Border Patrol claims that it takes migrants to nearby jails to shower. I didn’t meet anyone who had.

We cannot stand by and allow this to continue.

On Monday night, House Democrats passed a robust investment in the Northern Triangle—Guatemala, El Salvador and Honduras—to stabilize their governments and society so that we can dramatically decrease the level of violence and potentially reduce the flow of migrants.

And in the coming weeks, we will be voting on legislation that holds officials in Customs and Border Protection accountable and raises the level of care that innocent children receive.

I am pleased to support those efforts, but we need more. We need wholesale reform because this system does not work.

Desperate asylum seekers have traveled thousands of miles on foot—often with their children or young relatives—to reach a better life. When they get here, we need to connect them with critical health and social services, instead of locking them up.

We need to end the role of private prisons at the border because no one should profit off the pain of innocent families.

And we need to end the policy of family separation—right now. Though President Trump supposedly ended the practice, it continues to this day. I want to investigate this systemic failure and ensure this doesn’t happen again.

Seeking asylum is not a crime. As a nation, we pride ourselves on taking the tired, the poor and the huddled masses. It’s why I will continue to fight, hold the administration accountable and work with my colleagues to make sweeping changes to our immigration system.

Let’s remove private prisons from the southern border. Let’s refocus the system on people and their humanity, and let’s end the child separation policy that is the root cause of too many atrocities in the name of our government.

Be the first to comment on "Essay: ‘I was sickened by what I saw’"