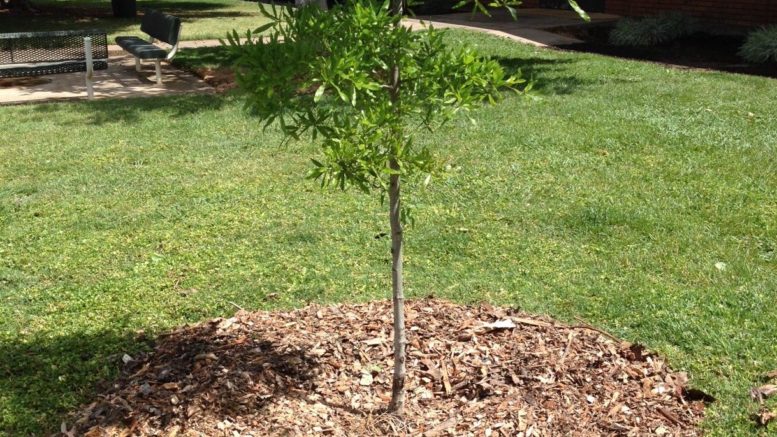 Use mulch, not rocks, around lawn trees

Rocks in a garden can be attractive. They can form paths or add accents.

But rock mulch around trees? Not so cool.

“This is not Phoenix,” said Pamela Frickmann Sanchez, education program manager for the Sacramento Tree Foundation. “Rocks are not mulch; rocks are rocks.”

With conversions of lawns to water-wise landscapes, Sacramento is getting pretty rocky. That concerns Sanchez and other experts who are dedicated to keeping Sacramento the “City of Trees.”

Trying to reduce water use, homeowners often replace lawn with cobbles or lava rock, which need no irrigation. That isolates former “lawn trees,” surrounding them with barren rock where there once was well-watered turf. Experts suggest a thick layer of mulch around almost any tree to conserve moisture and protect roots.

With rocks, it can appear the trees are mulched while cutting down on weeds, fulfilling two functions with each stone. But like concrete or other paving, rocks reflect and absorb heat, significantly warming the soil while also reflecting heat onto nearby plants. Leaves become sunburned; twigs get toasted. Roots slowly bake.

“Rock definitely increases the [soil] temperature,” Sanchez said. “It doesn’t insulate the soil or keep it cool. It doesn’t do much at all.”

Instead of saving water, adding a layer of rocks around plants actually increase water use. Hotter soil means stressed—and thirstier—shrubs and trees. “You have to use more water to keep your plants alive,” Sanchez said.

Covering a landscape with black rock is like paving the yard with black asphalt; everything seems hotter. Because it is: the black rock often gets 20 degrees warmer than the surrounding air if exposed to full sun. The effect can be particularly brutal in south- and west-facing gardens.

Shade could lessen that heat effect. But as part of low-water landscapes, trees often are removed.

Landscapers recommend rock or stone because, like a lawn, a leaf blower can be used to remove leaves and debris without disturbing the ground cover.

Instead, Sanchez recommends letting the leaves stay pretty much where they fall. That’s what nature does.

As for the mulch itself, take another cue from nature: Use chipped wood, the go-to mulch for the Tree Foundation. It’s heavy enough to stay in place, conserving moisture and cooling roots, while also adding nutrients to the soil. SacTree recommends a layer at least 6 inches deep spread like a giant doughnut around the tree, leaving space in the middle next to the trunk to help prevent crown rot. Sacramento residents can get free wood chips from SMUD, a SacTree partner.

Or get cheap wood chips from landscapers or tree cutters.

“I always ask what kind of trees they’ve been chipping,” Sanchez said. “You don’t want anything with a lot of seeds; they’ll sprout. Personally, I avoid liquidamber.”

Buzz on over: The open house and plant sale to support the Haagen-Dazs Honey Bee Haven at UC Davis is now set for Sept. 28, a week later than previously announced.

Be the first to comment on "Sticks and stones"