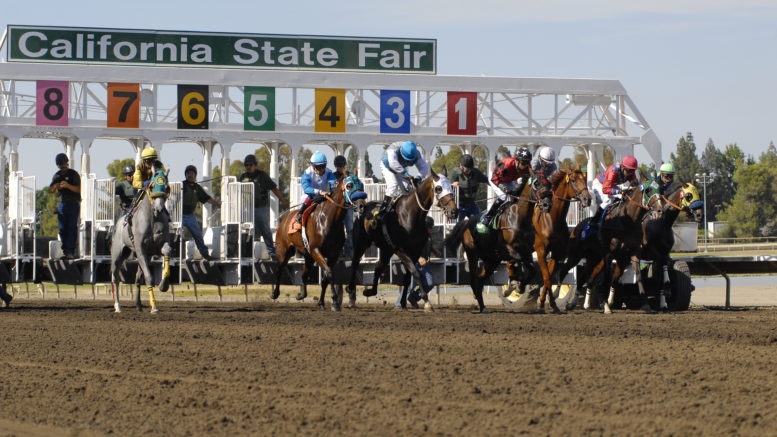 State Fair thoroughbred racing returns to Cal Expo on July 12. Cal Expo is considered one of the safest tracks in the state. (Photo by William Vassar/Vassar Photography)

California horse racing has a lot riding on what happens this summer in the Sacramento region.

Thoroughbreds return to the State Fair on Friday, July 12, for 11 racing days.

Meanwhile, experts at UC Davis will try to unravel the cause of deaths of 30 thoroughbreds since Dec. 26 at Santa Anita Park in Southern California, as well as help determine what can be done to stop future catastrophic injuries.

Responding to public outcry over the fatalities at Santa Anita, California’s most prominent track, Gov. Gavin Newsom signed a bill allowing the California Horse Racing Board to immediately suspend racing at any licensed track. The Sacramento-based board already has the nation’s toughest regulations on medicating horses and enacted more restrictions.

Despite the controversy at Santa Anita, “the irony is, we’ll end the fiscal year [June 30] with the second lowest number of fatalities we’ve had since 1990 when we started our necropsy program,” said Rick Arthur, the state’s equine medical director and a member of UC Davis’ veterinary school. “That’s within 10 percent of last year, which was the lowest we had since 1990.”

Cal Expo may serve as an example of what can go right on track. During the annual State Fair meet, the one-mile Sacramento oval hasn’t had a fatal breakdown in racing or training in two years.

“I’d put my tracks up against anyone in the U.S.,” said Larry Swartzlander, executive director of California Authority of Racing Fairs, which oversees the State Fair and other fair meets. “Our number one priority will always be safety and track condition.”

Any time a horse dies for any reason at any California race track or training facility, its remains are brought to UC Davis for examination. Last year, Santa Anita averaged 2.04 deaths per 1,000 racing starts; the national average was 1.68.

The spike in fatal injuries at Santa Anita spotlighted what can go wrong in horse racing. A wet winter with 16 inches of rain at the Arcadia track created havoc with track maintenance.

“It certainly appears associated with wet weather,” Arthur said, noting that 19 of the first 22 deaths at Santa Anita were related to ankle fractures.

“About 85 to 90 percent of fatalities can be traced to a pre-existing condition,” he added. “It’s not just one bad step.”

Before races, every horse is examined by a fitness veterinarian, the state veterinarian and a safety steward on site. Use of X-rays and PET scans can reveal those issues before fatal injuries occur.

“I actually see a silver lining in this,” Arthur added. “It’s certainly galvanized attention to safety. … The tragedy at Santa Anita really presented us with an opportunity to get some things done that we hadn’t been able to do previously.”

After suspending racing for three weeks in March, Santa Anita had an extremely safe streak in April and early May; more than 7,000 timed workouts and about 800 starts with no major injuries. But three fatalities in June brought the total to 30.

Four of the horses that died were trained by Hall of Famer Jerry Hollendorfer, who has about 120 horses in his care. In June, the Stronach Group, which owns Santa Anita and Golden Gate Fields in Albany, banished Hollendorfer and kicked out his horses from both tracks. With more than 7,000 career victories and nearly $200 million in earnings, Hollendorfer is Northern California’s all-time winningest trainer.

Hollendorfer has reserved 40 stalls at Cal Expo for the State Fair meet. “The CHRB has no action against Jerry,” Arthur said. “That was entirely a decision by Santa Anita.”

“The key to a good racetrack is the drainage system and the base,” Swartzlander said. “If there’s damage to either one, it’s like running over potholes.”

Besides the lives of horses, a lot of jobs are at stake. According to the American Horse Council, American racing is a $36.6 billion business, employing more than 472,000 people and about 3 million horses. Americans wager about $13 billion a year on thoroughbred, quarter horse and harness racing.

California is a big player in the sport, ranking behind only Kentucky and Florida. In 2018, 3,874 races in California were worth a total of more than $136.8 million, according to The Jockey Club.

Despite the tragic Santa Anita winter-spring meet, California horsemen are looking ahead to a good summer.

“Morale is very good, very upbeat,” Swartzlander said. “Most horsemen figure there’s not much they can do about it. They’ll follow the rules. The racing industry has to take responsibility for what it does.”

Be the first to comment on "Death on the track"