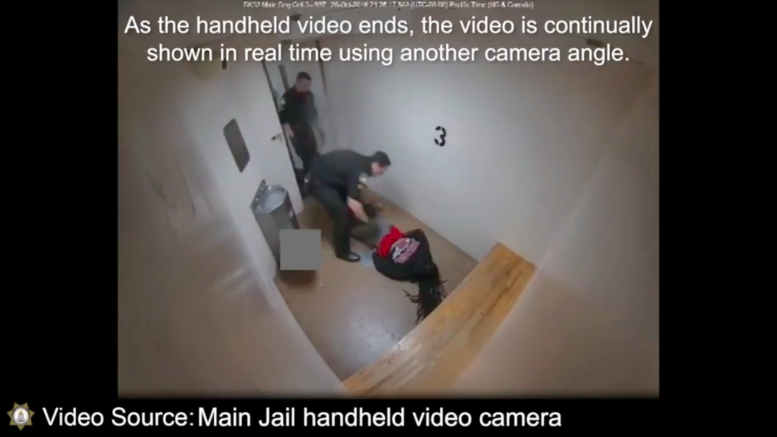 Marshall Miles lost consciousness and died inside the jail after being restrained by deputies in November 2018, one of the few videos Sheriff Scott Jones has agreed to release under a new transparency law.

Despite a local judge ruling against him this month, Sacramento County Sheriff Scott Jones is finding other ways to hide records from the media.

In back-to-back responses last month, the sheriff’s Legal Affairs unit rejected SN&R’s requests for records pertaining to eight jail inmate deaths and to former Deputy Paul Pfeifer, who has been sued three times for beating people with his flashlight.

The sheriff’s response reveals the fatal loopholes of California’s new transparency laws when it comes to people who die behind bars or the violent acts cops commit against civilians.

Regarding Pfeifer, who left the department after 2017, according to public employee database Transparent California, the county agreed to pay a $200,000 settlement to one of his victims in October 2016, media outlets reported. While the Sheriff’s Department indicated it had disciplinary records concerning Pfeifer’s conduct, it said it didn’t have to release them.

Personnel actions regarding misuse of force don’t have to be made public under Senate Bill 1421, explained First Amendment Coalition legal fellow Glen Smith.

“Obviously the law’s limited,” Smith said of SB 1421, which mandates the release of officer personnel records regarding sustained findings of sexual misconduct or dishonesty, but not excessive force. “They can also play games with what’s a ’sustained finding.’”

SB 1421, conceived alongside Assembly Bill 748 to require the release of body-camera footage concerning violent law enforcement encounters, does require the release of certain investigative records relating to uses of force resulting in death or serious injury. But both laws are also limited when it comes to the safety of people once they’re in custody.

More than 20 people have died inside the Sacramento sheriff’s jails since 2014.

While the Sheriff’s Department doesn’t tell the media when inmates injured inside the jails die outside of custody, SN&R confirmed that’s happened at least twice since 2017.

In an email replying to SN&R’s request to reconsider its denial, records officer Tanya Birch explained the department’s position: “Because none of the inmate deaths included in your request arise out of a use of force, there is no exception” under SB 1421, she wrote. “Your citation to the code section is inapplicable. The Sheriff’s Department will not amend its May 21, 2019 response.”

But SB 1421 also applies to incidents involving dishonesty by a peace officer or custodial officer, “including, but not limited to, any sustained finding of perjury, false statements, filing false reports, destruction, falsifying, or concealing of evidence.” SN&R asked if the Sheriff’s Department determined that the eight inmate deaths involved no misconduct by sheriff’s personnel. The department did not respond.

“Since we don’t know the circumstances of the in-custody deaths noted in your requests, there is no way to say whether the agency’s determination that the records are disclosable pursuant to SB 1421 is correct,” Whitney L. Prout, a staff attorney with the California News Publishers Association, which supported the law, wrote in an email.

Prout added that there is a separate section in the state’s public records law that does allow the department to release certain information regarding in-custody deaths, and that she “found it profoundly disappointing that even now the Sheriff’s department is still being obstructionist in its responses to records requests under the California Public Records Act.”

This isn’t the first time Jones has threaded the legal needle to skirt open records laws or shield corrupt cops on his payroll.

On June 6, a judge ruled the sheriff, who is licensed to practice law in California, violated the Public Records Act by withholding five years’ worth of records from The Sacramento Bee and Los Angeles Times, which sued in January.

Jones took a page from the playbook of California Attorney General Xavier Becerra by claiming uncertainty about whether SB 1421, which took effect Jan. 1, applied retroactively. Both law enforcement officials adopted a Pandora’s box mentality—that releasing older records before the courts weighed in could cause irreversible harm to violent, dishonest or sexually inappropriate officers.

The bill’s author, state Sen. Nancy Skinner, and one of its chief supporters, the ACLU Foundation of Northern California, said that it clearly did.

In April, a week after a Contra Costa County court knocked down a legal challenge from police unions as “without merit,” ACLU NorCal senior staff attorney Kathleen Guneratne released the following statement:

“If Becerra wants others to follow the law, he should start by following it himself. The attorney general should provide leadership to law enforcement by clearing the way for the release of his department’s own records and encouraging other police agencies to follow suit. Families have waited years for access to the investigations into the killing of their loved ones, in hopes of some answers.”

With the courts weighing in conclusively that older records are fair game, Jones has frustrated post-SB 1421 requesters with a convenient excuse.

Regarding five other use-of-force cases cited in SN&R’s request, the Sheriff’s Department said it had responsive records regarding five cases of dishonesty and 98 instances where an officer discharged a firearm. But the department provided no time line for when it would release those records.

“Currently, we do not have an estimate of the number of cases of use of force by an officer resulting in death or great bodily injury. The Sheriff’s Office did not previously utilize a mechanism to track this data, requiring personnel to review thousands of incident records to determine if they are responsive,” it wrote.

Omitted from the response is that the department had been urged for years to adopt such a tracking mechanism by Rick Braziel, the inspector general whom Jones forced out last August.