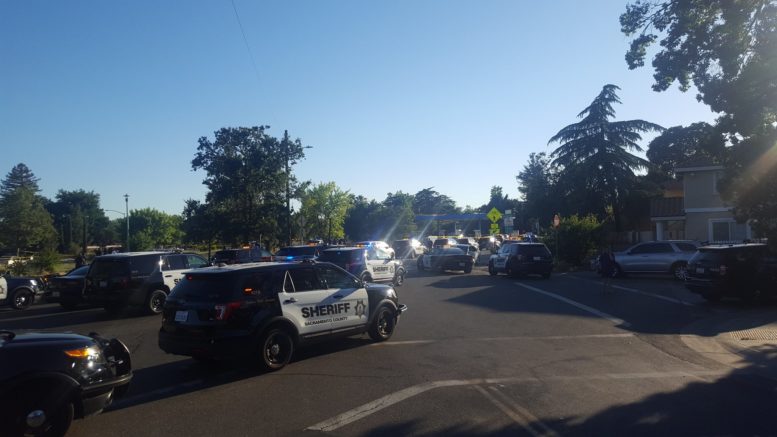 Dozens of law enforcement vehicles surround a home on the 200 block of Redwood Avenue in North Sacramento, in a standoff that lasted from Wednesday night to early Thursday morning.

What started as a domestic disturbance call led to the killing of a young female Sacramento police officer, allegedly gunned down by a lone suspect armed with a rifle.

At about 1:54 a.m. Thursday, police said, the suspect had surrendered and was taken into custody after an hours-long standoff that brought dozens of police, tactical and public safety personnel to the Noralto neighborhood in North Sacramento. The suspect, who was later identified by police as Adel Sambrano Ramos, 45, had been holed up in a house on the 200 block of Redwood Avenue, sporadically firing at officers who surrounded the home.

The officer, 26-year-old Tara O’Sullivan, died at UC Davis Medical Center after being rushed from the scene. She is the first Sacramento police officer killed in the line of duty in 20 years.

Officials said that at 11:43 a.m. Wednesday, police responded to a domestic disturbance call and made contact with a woman at a home on the 3700 block of Esperanza Drive.

At about 5:41 p.m, officers went to the Redwood Avenue house as the woman gathered some belongings. Thirty minutes later, it was reported that an officer had been struck by gunfire.

For approximately 40 to 45 minutes, O’Sullivan lay in a nearby backyard and in the line of fire as more officers responded. At 6:59 p.m, officers using an armored vehicle pulled Sullivan from the scene.

Outside the yellow crime tape, neighborhood residents looked on at a chaotic scene at the intersection of El Camino and Traction avenues, where police SUVs, armored vehicles and fire trucks crowded the Thrift Town parking lot and surrounding roads. Dozens of officers carried assault rifles, while helicopters circled above.

“I was driving up to go home, and then all of a sudden, I see all these cop cars and pulled over,” said Pauline Martinez. “And all of sudden I just heard pop-pop-pop-pop.”

“We are devastated tonight,” Deputy Police Chief David Paletta told reporters. “There are no words to convey the depth of sadness we feel, or how heartbroken we are for our family of our young, brave officer.”

O’Sullivan had been hired by the department in January 2018 and graduated from the police academy in December. She was in training, shadowing officers, and was scheduled to go out on patrol on her own soon.

Steinberg said while it had been 20 years since a city police officer was killed in the line of duty, another academy class had lost an officer in the last year. Davis police Officer Natalie Corona, 22, was killed in January after completing her academy training last July.

“Both Natalie Corona and Tara O’Sullivan had bright futures ahead of them,” Steinberg said. “They were committed to our communities, committed to protect and serve selflessly.”

O’Sullivan was a child development major at Sacramento State and part of the first graduating class of the Law Enforcement Scholars Program, which emphasizes inclusion and cultural competency.

“Every day, in service to all of us in Sacramento, our police officers leave home knowing there’s a possibility that they will never return,” Steinberg said. “Today, that horrible possibility has become the devastating reality, her family, her friends, her classmates, and her fellow officers. It is now our horrible reality as a city family and as a broader community.”