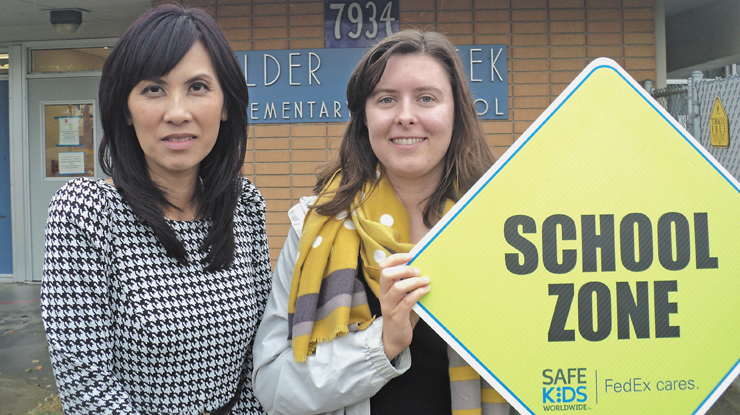 “We want to continue to partner” with WALKSacramento, said Thule Doan (left), principal of Elder Creek Elementary School, one of nine South Sacramento campuses that have worked with the pedestrian-safety nonprofit, through a California Endowment grant. Alongside is Alicia Brown (right) of WALKSacramento. Photo by Edgar Sanchez

Five days a week, thousands of boys and girls throughout Sacramento walk to school and back—putting themselves in peril.

At many corners, the children face motorists who might run red lights and stop signs, without yielding to pedestrians.

The situation has reached a crisis: According to recent reports, in 2016—the latest year for which numbers are available—40 youths, age 14 or under were injured or killed by drivers while walking in Sacramento. That’s the highest rate among California’s large cities.

“Children and parents shouldn’t have to worry about safely getting to school,” Alicia Brown, of WALKSacramento, said recently. “But the reality is that our streets prioritize cars over pedestrians and create dangerous conditions for students.”

Getting motorists to stop for pedestrians is a key goal of WALKSacramento.

The nonprofit works with transportation and land-use planners, elected officials and community groups to create safe, walkable environments for all citizens, ranging from children and seniors to people with disabilities.

In 2017, The California Endowment awarded a three-year grant to WALKSacramento’s Safe Routes to School Program (SRTSP) which seeks to reduce car-pedestrian accidents before and after school.

WALKSacramento has since partnered with nine South Sacramento schools, all in the Sacramento City Unified School District, to enhance pedestrian/bike safety.

“Children and parents shouldn’t have to worry about safely getting to school.”

Soon after receiving Endowment funds, WALKSacramento documented a lack of sidewalks on streets leading to Fern Bacon Middle School. Citing that report, Sacramento County successfully applied for a state grant of about $1 million, which helped pay for bike lanes to Fern Bacon, as well as for the ongoing installation of sidewalks adjacent to the school, said Brown, an SRTSP coordinator.

This semester, WALKSacramento has worked with Elder Creek Elementary, the largest elementary school in the Sac City Unified District.

Elder Creek had fast-moving cars zooming past it all day, and many drivers delivering their children to the school in the morning, then picking them up later.

This fall, the traffic woes have been alleviated to a degree, Elder Creek Principal Thule Doan said. That said, an Elder Creek third-grader was recently struck by a car in a nearby crosswalk, Doan said. The boy suffered minor injuries.

Part of the solution: Each morning, some parents now drive their children to the George Sim Community Center parking lot on Logan Street. Parents and students then walk to the school, along a ½-mile safe route that doesn’t require crossing any intersections. Most of the route is on the south side of Lemon Hill Avenue, beside Morrison Creek.