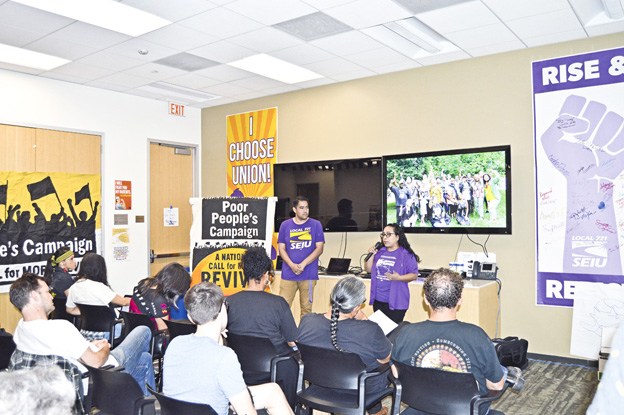 This tale of two organizers shows the power of people united

This time of year, people reflect on what they’ve accomplished and what they aspire to do in the year ahead. As they celebrate the holidays, they take time out to renew their faith and share their values.

One of the moral leaders who inspires me most this season is Rev. William Barber. He is the national leader of the Poor People’s Campaign, a call for moral revival modeled after Dr. King’s original campaign of the same name.

In this moral movement, he says it’s not about left and right or conservative or progressive; it’s about right and wrong.

He recently launched a new campaign reminding us to do MORE— mobilize, organize, register, educate.

Rev. Barber started organizing more than 20 years ago. He worked to build bridges between non-traditional allies. And it worked. Their efforts successfully blocked voter ID laws intended to keep poor people from participating in elections.

This movement helped secure a narrow victory in the 2008 presidential election for Barack Obama in North Carolina.

Rev. Barber fought back by launching a series of protests in 2013 at the North Carolina state house called Moral Mondays. By the end of that summer, more than 1,000 protesters were arrested over voter suppression.

Rev. Barber is still organizing. He is touring more than 20 states as part of his MORE Campaign. That tour will culminate June 20, 2020, with a People’s Assembly and Moral March on Washington, D.C. to demonstrate our power.

Here in California, SEIU Local 1000 member Rose Gudiel is helping to organize our participation in the MORE program. During the Great Recession, she learned firsthand the power of people united when a big bank tried to foreclose on her home. Her protests at the bank’s offices gained national attention. With the help of her union, she fought and won, keeping her house.

Her experience transformed her into an organizer who connects with Rev. Barber’s vision. She sees how the right uses racism to divide working people and keep them from being more powerful. This led her to fight for the right of fast food workers to earn $15 an hour, and then connect to our fight for $15 an hour for thousands of our own members in our last contract campaign.

Rose is always trying to do MORE. Inspired by Rev. Barber, she sees how issues are interconnected, linking racial justice, environmental justice, tax fairness, and aligning our spending priorities. She shared her vision about how budgets are choices, as Rev. Barber explores in his poor people’s budget. Shifting small amounts of resources from the multi-billion dollar war budget, for example, could provide clean drinking water for everyone in the country. (California alone needs clean drinking water for 1 million people.)

Today, Rose is helping to organize thousands of people to come together for Martin Luther King Jr. Day, January 20, 2020, to walk with me and Rev. Barber. She is one of our shining lights, and while the days grow shorter and nights grow longer, Rose continues to fill me with hope.

This season, let’s envision a world that could be different. Let’s follow Rose’s lead to find that spark, then use it to ignite our passion and our belief that through our actions we can change the world.

Be the first to comment on "Yvonne R. Walker: Striving to do MORE"