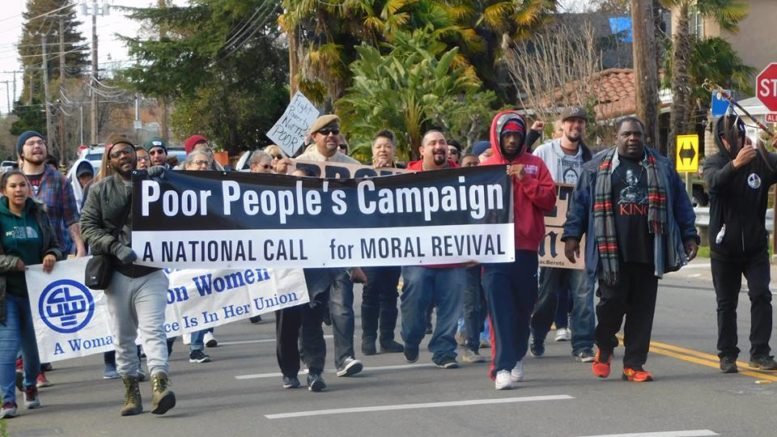 King’s dream of ending poverty fizzled after his 1968 assassination. So why is it resonating a half-century later in Sacramento?

For six Mondays last summer, demonstrators with the California chapter of the Poor People’s Campaign occupied space inside the state Capitol—in front of lawmakers’ doors, in the balcony during Senate floor sessions and outside the office of then-Gov. Jerry Brown.

The latter happened June 18, 2018, the campaign’s final day in Sacramento, when the California Highway Patrol arrested at least 34 protesters. In all, more than 50 people associated with the campaign were arrested in the city last year—the 50th anniversary of what began as a revolutionary dream of Martin Luther King Jr.’s, one he didn’t live long enough to shepherd.

The Nobel Peace Prize winner was at the height of his influence, having successfully lobbied for landmark civil and voting rights laws a few years earlier. King and his allies in the Southern Christian Leadership Conference developed the idea to unite socioeconomically disadvantaged people of different races for a galvanizing march on Washington, D.C. The peaceful protesters would demand billions of dollars as part of an Economic Bill of Rights, guaranteeing employment and basic income and ending discriminatory housing policies.

But in April 1968, one month before the campaign was to begin, an assassin’s bullet struck King down in Memphis. As a result, the first Poor People’s Campaign didn’t live up to his vision. In many ways, King’s desire to unite the nation’s struggling masses against the interests that divide them is the civil rights leader’s unfinished magnum opus. Fifty-one years later, his followers here and around the country are trying, once again, to complete it.

While the arrests last year put California’s campaign in the headlines for a short time, state chapter co-chairperson Faye Wilson Kennedy said this year’s Statewide Truth and Poverty Bus Tour, which began April 3 in Chico and ends April 13 in San Diego, will strike a different tone.

“We’re trying to have the people on the bus and the vans see what kind of issues Sacramento and other cities in California are facing,” she said. “We want them to see firsthand.”

The bus tour, which will focus on police militarization and California’s growing poverty rate, will hit Sacramento on April 4 before traveling south, stopping in Central Valley cities along the way.

Wilson Kennedy, who has been with the campaign since it joined the national organization in 2017, said homeless advocates, community leaders and family of victims of police violence will speak at a two-hour town hall in Sacramento, then march to Loaves and Fishes, the city’s largest homeless service provider, a deliberate contrast to the Capitol backdrop of past marches.

“We have to affect change at, not just the national and state level, but at a local level,” Wilson Kennedy said. “When you can talk to the people who are affected by policy and engage with them, you can actually look at and understand the cause of [poverty].”

King’s death prevented him from making that case like only he could.

The Nobel Peace Prize winner was at the height of his influence, having successfully lobbied for landmark civil and voting rights reforms a few years earlier. Thousands joined Coretta Scott King on Mother’s Day 1968 to launch the campaign in Washington D.C. Thousands stayed, camping for six weeks in wooden shanties in what became known as Resurrection City. The campaign culminated with a solidarity march that drew approximately 50,000 to the Lincoln Memorial. Days later, authorities raided Resurrection City and arrested hundreds.

The PPC deteriorated as a movement soon after. Despite the campaign ending without specific policy changes, its summer of action influenced the organizations that followed, said Paula C. Austin, a historian and assistant professor at Sacramento State University.

“If we want to trace Poor Peoples’ Campaign we have to look at the orgs and unions that came together for those two years of organizing the 68 summer stuff and see what their work looks like after that,” Austin wrote in an email. “And we need to face the realities of the American War in Vietnam—both the anti-war movement, and the impact on domestic spending.”

But it also existed during a rapaciously eventful time.

The assassinations of King and Democratic presidential candidate Robert F. Kennedy that June preceded the election of Richard Nixon, who created the war on drugs, expanded the war in Vietnam and cracked down on dissidents at home.

Cut to 2019, and organizers of this year’s campaign say they believe they’re up against a similarly divisive adversary in President Donald Trump.

Ruth Ibarra, a Sacramento organizer who was arrested in Washington, D.C., during last year’s actions, said the way to align struggling people of different races, religions, political identities and regions is to share their stories with each other.

“[Lawmakers] always talk about policy, but they don’t know what their policy looks like,” Ibarra said. “[We need to] humanize those issues and not get stuck on the sayings like, ’The rent is too damn high.’”

Despite having the fifth largest economy in the world, California is home to the nation’s highest poverty rate—around 19 percent, or more than 7.5 million people—when factoring in cost of living, according to recent census data.

In Sacramento, the rate is similar.

But to Wilson Kennedy, shelters are not enough, because they are being built at the directive of the city and not by the people who need the shelter.

“You have to have people who are homeless be a part of the decision-making process,” Wilson Kennedy said. “Engage with those folks who are living there, because when we rush to help people, we struggle to see those specific things.”

Be the first to comment on "California organizers are trying to complete Martin Luther King Jr.’s vision of uniting the poor"