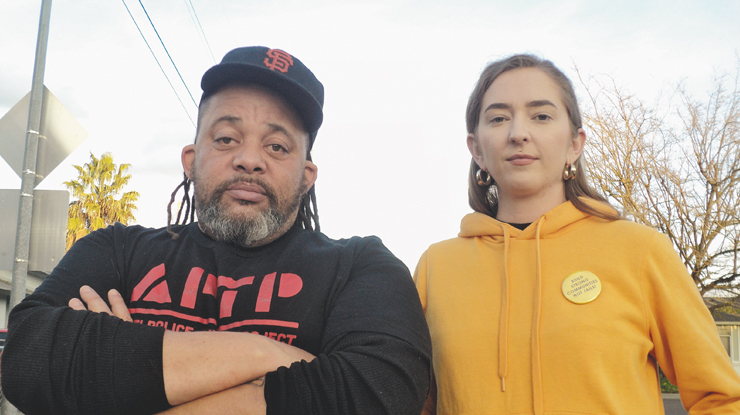 Building strong communities, not jails, is a key goal of Decarcerate Sacramento’s Courtney Hanson and Adam Wills of the Anti Police-Terror Project. Photo by Edgar Sanchez

An activist group that stopped an $89 million expansion of Rio Cosumnes Correctional Center in Elk Grove says its fight for criminal justice reform is not over.

Construction bids for the RCCC project had already been requested in mid-July when members of Decarcerate Sacramento asked the Sacramento County Board of Supervisors to halt it.

The grassroots group kept up the pressure until Nov. 5, when the board abandoned the project. At the time, DS was 5 months old — but it had gained support from private citizens and nonprofits.

“We received congratulatory messages from all over,” Courtney Hanson, a DS organizer, said recently.

For 2020, the group’s priorities include working with county leaders to significantly reduce the county’s jail population, currently believed to number about 3,700, most of whom await trial.

In mid-January, the Sacramento Chapter of the National Lawyers Guild — a champion of human rights — honored DS with a social justice award for its “tireless advocacy of jailhouse conditions, fighting mass incarceration (and) inhumane treatment of the incarcerated.”

The award was accepted by seven DS members, among them civil rights attorney Tifanei Ressl-Moyer.

“There’s no way we would have stopped a jail expansion unless we had a broad and diverse coalition,” Ressl-Moyer told the Guild.

The coalition brought the expansion plan to the public’s attention after the Supervisors had already voted to start accepting bids on April 23. Decarcerate Sacramento, organizing their first action in July, told Supervisors that the plan orchestrated by the Sacramento County Sheriff’s Department made no sense.

“We received congratulatory messages from

At a time when other cities had moved away from new jail construction and in-custody mental health services, the project would have added new buildings next to RCCC to, among other things, support medical/mental health programs.

Ultimately, three of the five supervisors withdrew their support for the plan, killing it.

For those who want to get involved, DS will host a General Meeting on January 30th, with details on their Facebook page.

The volunteer responders, including a crisis counselor, are trained to de-escalate crises to keep people out of jail.

Be the first to comment on "Keeping People Out of Jail"