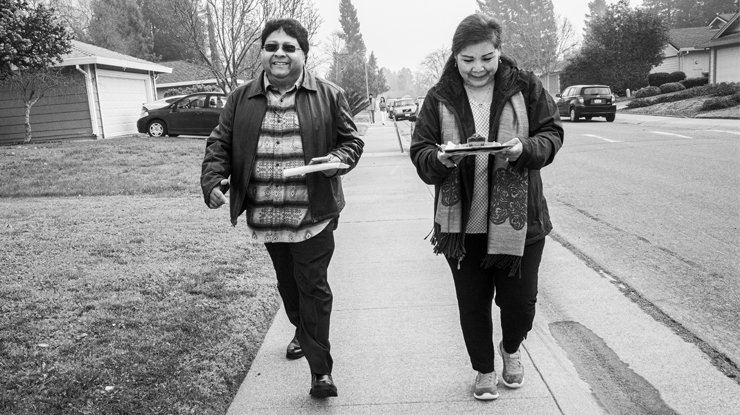 Their grassroots efforts led to real change in their communities

How do you create change? You can organize at the grassroots level, inspiring others and nurturing ideas. And you can vote, electing leaders who will follow through on those ideas and make them into law.

This week, I want to celebrate Black History Month by highlighting two African American women, past and present, who by their actions and example made a real impact in two very different movements, helping to recruit, create opportunities and inspire others to join and make change.

During this 100th anniversary of American women earning the right to vote, I also want to feature the voting process in Sacramento, how it works, and why it’s been effective in getting more people to participate. So, be sure to read the sidebar to the right.

Over 60 years ago, Georgia Gilmore turned her culinary skills into funds for a crusade.

You’ve probably heard of Rosa Parks, whose refusal to sit in the back of a segregated city bus inspired the Montgomery, Alabama, boycott in 1955. Gilmore’s contributions were just as important; she is thought to have raised more money for the boycott than any person in Montgomery.

As a cook, Gilmore herself had faced racism many times, including on the bus. Most of the regular bus riders were Black workers: Housekeepers, nannies, cooks and laborers. The bus was their transportation system. During the boycott, they needed other ways to get to their jobs.

That’s where Gilmore came in. A few months after the boycott started, Gilmore lost her job after testifying in support of Dr. King and other boycott leaders. She subsequently opened her own catering company and developed a deep network of women to raise money for the boycott by cooking and selling food, and used the money to pay for gas and city-wide carpools. Just as importantly, she did so without drawing undue attention from white community members, who otherwise might have kicked them out of white-owned homes for organizing. (At the time, approximately half of the black women in the city worked for white families.)

After 381 days, the boycott ended when the U.S. Supreme Court struck down laws requiring segregated buses.

Worried about the water crisis that was sickening whole communities and killing people, Mari Copeny, aka “Little Miss Flint,” wrote a letter to President Obama when she was 8 years old. She shared that she was headed to D.C. to watch Congressional hearings about the Flint water crisis and asked the President to meet with them. Instead, her words inspired Obama to fly to Flint himself, giving the crisis national attention.

Five years later, Copeny’s still bringing attention to unsafe water initiatives. She started #WednesdayforWater to let people know about places where drinking water is unsafe. And she continues to create opportunities to connect with people, inspiring thousands to write letters to kids in Flint, letting people know they are not forgotten, hosting birthday parties, collecting thousands of backpacks, as well as helping with book and bicycle fundraisers for kids in her community.

These two leaders made real differences. Past and present, they remind us how we can take action to help dismantle racism and improve our communities together.

The “polls” for the March 3 Presidential Primary are now open – at least in Sacramento County.

California is making voting easier and getting more people to participate. Under the Voter’s Choice Act, registered voters have three ways to vote: By mail, by drop box or in person.

Voters have more time to submit their ballot

We’ve had some practice with this new system; Sacramento County was among the first to try out this “more ways, more days” process. During the pilot program, Sacramento voter participation went up, compared to the previous mid-term election.

You have until Feb. 18. (You can check your voter registration online at https://voterstatus.sos.ca.gov.)

If you miss that deadline, you can still vote; now you can cast a conditional ballot at a Vote Center through Election Day.

This is very exciting.

Ballots already have been mailed out to registered voters. That’s a live ballot, not a sample, so don’t throw it away.

Mail in your ballot, postage paid, anytime through Election Day

Or drop if off at one of almost 60 drop boxes. Or in those final 10 days, vote in person at any Vote Center; you’re not restricted to precincts. (See locations for drop boxes and Vote Centers at https://elections.saccounty.net/votecenters/pages/locations.aspx.)

Want to vote for a presidential nominee?

If you are registered with some parties, you can vote for the nominees in that party. If you are not affiliated with a party, you can request a presidential party ballot listing Democrat, American Independent or Libertarian presidential candidates without re-registering. (Ask for it at a Vote Center.) If you’re non-affiliated and want to vote Republican, Green or Peace & Freedom, you’ll need to re-register.

In the Nov. 3 general election, that’s not an issue; everybody gets the same ballot.

Be the first to comment on "Yvonne R. Walker: Leaders who made a difference"