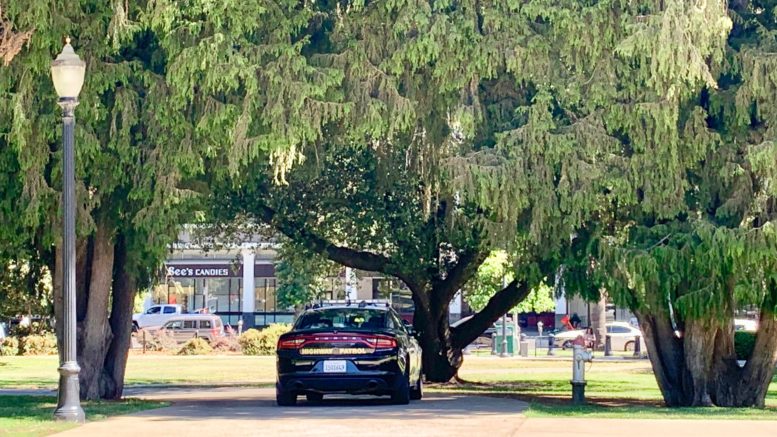 A California Highway Patrol cruiser parks near the Capital. State police have been a major participant in civil asset forfeiture. Photo by Scott Thomas Anderson

No matter how many Americans have had their rights trampled through the forfeiture legal anomaly, Capital City leaders can’t get enough of the profits

Law enforcement agencies across the nation are still seizing and keeping peoples’ cash and property – in many cases, when a citizen hasn’t even been charged with a crime – and using the spoils of those raids to fund their special projects and out-of-reach wish lists.

Despite prominent liberal and libertarian groups agreeing that the practice is unconstitutional, Sacramento officials are once again eager to get their cut of the action.

At least one public agency in the region is making a different ethical call.

The law giveth, the law taketh away

In recent years, few legal issues have united progressives and conservatives more than opposition to civil asset forfeiture, which is the ability of local, state or federal law enforcement to permanently confiscate a citizen’s money and belongings over the claim that it’s somehow linked to crime.

Critics of asset forfeiture, including a number of veteran Sacramento attorneys, say that the burden of proof for police to engage in this conduct is incredibly low, while the hurtles and legal expenses for someone to get their property back is incredibly high.

Every year, the statewide and federal bounties from these seizures are liquidated and then channeled back to local governments through two different revenue-sharing programs. On June 8, the city of Sacramento’s Budget and Audit Committee began its annual plan for spending that incoming money. This year, it will be a total of $597,000.

Sacramento Police Chief Daniel Hahn began his presentation with a description of where these funds originated from.

“It’s the result of a court of law determining the assets seized during a criminal investigation are ill-gotten gains of illegal activity,” Hahn explained. “By a civil court order, the assets are then forfeited and then distributed among innocent property owners, crime victims, prosecutorial agencies and law enforcement agencies.”

While it’s true that, after a seizure, investigators have to petition a judge to keep their newly acquired treasures, Hahn’s description did not mention that this process merely involves articulating probable cause. It does not require a legal conviction to prove that anyone committed an actual crime. Moreover, in a good number of cases, it doesn’t even require the person be charged with a crime, let alone found guilty of one.

A recent investigation by reporters for Bay Area News Group determined that, between 2015 to 2018, Contra Costa County law enforcement netted $1.1 million by taking cash and property from individuals who were never formally arraigned on charges.

This element of asset forfeiture was not discussed at all by Sacramento’s police chief or councilmembers on June 8.

Then again, local chiefs and sheriffs have shown few reservations about their own officers engaging in asset forfeiture: According to data from the California Department of Justice, law enforcement agencies in Sacramento County led all other counties in the state in 2019 for employing the practice. In that year alone, they launched 666 asset forfeiture cases, and reaped roughly $7.1 million in real estate, property and cash.

On the national level, cases of officers abusing asset forfeiture to essentially rob innocent people while funding their own departments have been documented – repeatedly. California has had its own share of extremely questionable forfeiture stories in recent years.

Six months ago, after Contra Costa County’s stats came to light, the district attorney of that jurisdiction announced that she would no longer sign-off on asset forfeiture cases unless they involved someone directly being charged with a crime.

Discussing their latest forfeiture loot, Sacramento officials were quick to stress that it was money being used for youth drug prevention and gang intervention programs. However, a closer look at the spending plan shows those are not its main priorities. Of the $597,000, some $200,000 is earmarked for the Sacramento Police Department’s straight operations and investigations. The next largest cut, $206,304, is being set aside for buying new police equipment. Additionally, $12,074 will be spent on police training, travel and per diem.

With the bulk of Sacramento’s funds already spoken for by some of very police commanders who engaged in the seizures that conjured the revenue in the first place, what remains will be allocated to a number of community-based organizations. Among the recipients are City of Refuge, the Neighborhood Wellness Foundation, the Brother to Brother program, Kops n Kids, and the Police Foundation cadet program and activities league.

Reviewing those nonprofits at the meeting, Mayor Darrell Steinberg expressed relief that they were getting more financial support than the City could otherwise offer on its own.

“You know, I look at all these great organizations and say, ‘There really isn’t a whole lot of money in the fund to fund as many of these programs as we want,’” the Mayor said. “This fund is important,” he added of the asset forfeiture program, “but more important is the general fund.”

Of all the councilmembers who spoke, only District 6 representative Eric Guerra mentioned that the City was wading into murky waters.

“I haven’t kept up on any recent studies, but I do recall in my previous work concerns about asset forfeiture,” Guerra acknowledged, “the collection of them, and the potential of these going to sustain long-term operations when this is revenue that’s one-time in nature – at least the hope is that it’s not going in nature.”

Guerra then elaborated that his own concern was Sacramento consistently using the forfeiture funds as a crutch to relieve pressure from basic general fund spending obligations. That, he insisted, needs to change.

“I’d like for us to start transitioning, with a shift in policy in the use of the asset forfeiture,” he noted, “for them to go less into long-term operations and more into capital, one-time expenses; and more [money] going into the drug and gang prevention programs.”

Seize and spend: A California Republican is battling the Trump administration over asset forfeiture