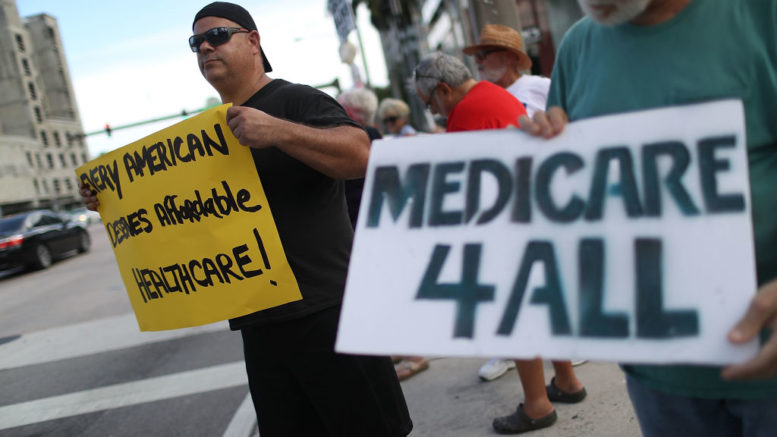 The idea that most Americans support universal health care is neither new nor particularly controversial. Surveys showing broad public dissatisfaction with the current system go back at least a decade, and in a 2018 Reuters-Ipsos poll, 70% of respondents said they would support a program of Medicare for All — numbers identical to a survey conducted later that year by the HarrisX polling company.

Still, progress toward establishing such a program has been tortuous. The country’s health care industry behemoths have been tremendously effective at using well funded lobbying efforts to blunt single-payer legislation at the national level, and presidential candidates like U.S. Sens. Bernie Sanders and Elizabeth Warren have seen their Medicare for All plans beaten into the ground.

If you’ve been part of the larger conversation, though, you are also likely to have heard a talking point along the lines of “But people love their health plans.” The implication is that, even among those open to a single payer or public option form of health care, they wouldn’t want to give up their own insurance as it currently exists.

In any discussion like this, it’s useful to define terms. Let’s do that now: What Americans like, overwhelmingly, is their public health insurance. What they find inefficient and costly — and what the health care giants are desperate to keep propping up — is a megabillion dollar private insurance industry that consistently ranks below every public option available to consumers.

That’s the upshot of the findings published last month in the Journal of the American Medical Association. In a comprehensive survey of nearly 150,000 Americans, JAMA concluded that people with private insurance — either bought on their own or via an employer-sponsored plan — were the most likely of any health care users to say their access to care was poor, their costs high, and their satisfaction low.

Moreover, every public program — Medicare, Medicaid (it’s called Medi-Cal in California) and the Veterans Health Administration — was viewed more favorably, especially in terms of cost, than any form of private insurance. (Results were somewhat mixed for Medicaid.) So convincing were the results overall that the authors of the JAMA abstract suggested U.S. policymakers consider “increasing the number of individuals covered by Medicare” as one way to improve patient satisfaction levels.

“We have the means to a more equitable, fair and effective health care system,” said Anthony Wright, executive director of Health Access California, which advocates for universal health care. “This survey undermines the idea that people don’t trust a system simply because government might be involved in it.”

The most recently approved version of the California budget for 2021-22 continues to move the state along a path toward health care for all. Included is a plan to open up Medi-Cal coverage to income-eligible state residents over age 50, regardless of their immigration status. The move, the first of its kind in the nation, would open the doors of health care to an estimated 235,000 undocumented adults in the state.

It has been an evolution. In 2016, the state expanded Medi-Cal to include income-eligible immigrants age 18 and younger, and in 2019, with Gov. Gavin

Newsom supporting new legislation, that coverage grew to include undocumented immigrants 25 and under. With the new budget’s inclusion of those 50 and older, a huge swath of residents will have access to health services. (The best estimates put the total number of undocumented immigrants in California at 2.3 million, down from 2.9 million in 2010.)

“One thing we know is that the state is better and healthier overall when more of its residents can get things like comprehensive and preventative care,” Wright said. “What’s still left are those people in the middle (ages 26-49), but it’s now a lot more doable than it might have seemed in the past. We are showing that we can do this.”

Medicaid meets with varying degrees of patient approval across the country because the specifics of the program often depend upon where you live. For example, 12 states still have not expanded Medicaid coverage to more of their low-income residents, even though a 2014 Obama-era policy shift encourages them to by declaring the federal government will pick up most of the cost. Seven of those states lie in the Southeastern U.S.: Mississippi, Tennessee, Alabama, Georgia, North Carolina, South Carolina and Florida.

The JAMA authors, researchers from the University of California, San Francisco, and that city’s Veterans Affairs Medical Center, noted that a Medicaid co-pay for inpatient hospitalization in Kentucky costs $50 per day, while in Maine it’s $3 and Delaware is free. For families with little money, a $50 daily co-pay is a problem. And “access to specific services remains a challenge” within the Medicaid system, which places more focus on getting basic coverage to previously uninsured people, the authors said.

Private insurance patients, meanwhile, are more likely to report difficulty seeing physicians because of the price, more likely to skip medications because of price and more likely to have medical debt than either Medicare or the VHA patients. And as anyone knows who has purchased insurance through the federal exchange (like Covered California), private insurers generally offer policies there with sky-high deductibles, often running into several thousands of dollars of patient responsibility before they pay a dime.

About half of all Americans get health insurance through their employer, or at least they did prior to the pandemic; 2019 data is the most recent available. But over the past 20 years, employees’ contributions to those plans have escalated dramatically, while their coverage benefits have shrunk. “For some reason, we like to focus on coverage, when the issue for workers, people and the public generally is cost,” Drew Altman of the Kaiser Family Foundation, which performs annual surveys on the topic, told the New York Times.

All these may be reasons why Medicare shines above other plans, public and private, when it comes to approval ratings. In fact, the most recent JAMA survey reflects a consistent pattern of preference for Medicare that goes back at least two decades, the authors said.

Medicare involves cost sharing, and most patients buy supplemental coverage as well. But 70.1% of Medicare users in the JAMA survey reported satisfaction with their care, followed closely by those who access the military health care system. And Medicare users were less likely than any others to have trouble finding a physician or to rack up medical debt.

It’s possible, experts suggest, that older Americans understand the value of health care more than younger people do, and in polling thus appreciate that Medicare often works the way it’s supposed to. “But they also see the system as fair,” Wright said. “They’ve paid into it over the years, and now they’re using what they paid for.”

How to pay for all public health systems is a question without a simple answer. The Medi-Cal expansion to undocumented low-income immigrants 50 and older, for example, will cost California an additional $1.3 billion per year once it is fully implemented, per estimates. But proponents of expanding public health access have long argued that a national single-payer system would save money, and at least 22 studies agree.

Will it ever happen? At this point, it’s one small step at a time. But a place to start might be to dispense with industry funded propaganda that suggests Americans can’t bear to part with their insurance plans — and to embrace the reality that a public plan is already the most popular option in the country.

Be the first to comment on "Why do people hate universal health care? It turns out — they don’t"