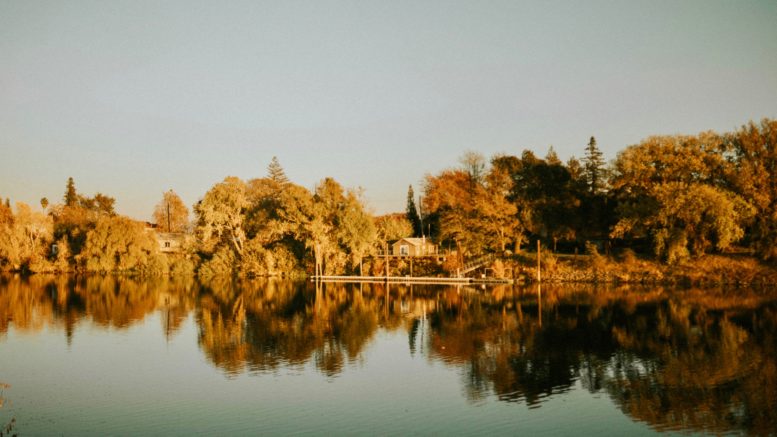 After years of state and federal agencies exporting large amounts of fresh water from the Sacramento River, their scientists are now documenting a big environmental problem. Photograph by Yang Hawj

On July 6, the California Department of Fish and Wildlife published an update on the status of federally and state-protected Sacramento River winter-run Chinook salmon, which warns “it is possible that nearly all in-river juveniles will not survive this season.” This is because the cold water pool in Lake Shasta is depleted earlier than scientifically modeled for, due to increased downstream water deliveries during the hot weather.

Previous reports from the CDFW documented a large mass of winter-run Chinook in stressed conditions below Keswick Dam, including adult fish dying before spawning in the relatively warm water conditions.

While the CDFW attributes the potential loss of nearly all juvenile winter-run chinook this year to the hot weather and the “persistent heat dome,” representatives of fishing and environmental groups attribute the dismal situation to state and federal mismanagement of water.

“This is exactly what we warned the State Water Resources Control Board about when we spoke on the precarious condition of Sacramento River winter run at their meeting in April,” said Mike Conroy, Executive Director of the Pacific Coast Federation of Fishermen’s Associations. “While I appreciate the deflection and trying to blame the weather – this is most assuredly not about hot weather.”

He added, “Our government officials have generally been failing to provide adequate conditions (or even meet their own plan) since spawning began.  This is negligence and incompetence by those in power.”

“Californians should be alerted that the extinction of a native salmon run is underway right now as a result of government inaction to stop it,” McManus said. “State and federal water managers have apparently decided it’s politically inconvenient to reroute short water supplies to prevent extinction if it means a few less acres of crops … We’re losing winter run salmon right now and the fall run salmon that supply the sport and commercial fisheries will be decimated, too. Californians who care about the environment need to hold government officials accountable for allowing the loss of the state’s natural resources on their watch.”

Along these lines, San Francisco Baykeeper Senior Scientist Jon Rosenfield recently warned, “Right now, Shasta Reservoir still has enough cold water to protect the winter and fall runs of Chinook Salmon from high water temperature.  But instead, the Bureau of Reclamation is planning to deliver that water to Central Valley agribusiness. And the State Water Board, which has the authority and obligation to prevent the Bureau from squandering the cold water, is failing (yet again) to act meaningfully to stop this disaster.”

Despite the winter run’s protected status, and the warnings by Rosenfeld and other scientists, the State Water Resources Control Board continues to approve the delivery of millions of acre-feet of water to state and federal water contractors during a record drought.

On June 1, fishing and environmental groups submitted an emergency water management plan to the State Water Resources Control Board as an alternative to the controversial Bureau of Reclamation water temperature management plan that was approved the spring. So far, the Board has continued to support the Bureau’s plan.

Drafted by the California Sportfishing Protection Alliance, the California Water Impact Network, and Save California Salmon, the groups’ alternative plan would significantly reduce salmon-killing high temperature water releases from Shasta and Trinity reservoirs. It would also maintain carryover storage in the event of another dry year. The organizations say the plan would “protect Chinook salmon spawning and rearing in the Sacramento, Trinity and lower Klamath Rivers” and “maintain an extra half-million acre-feet of water in Shasta and Trinity reservoirs should next year also be dry.”

So far, the Reclamation agency hasn’t even followed its own temperature management plan regarding releases to the Sacramento River, according to Bill Jennings, Chairman and Executive Director of the California Sportfishing Protection Alliance.

“Under the Bureau temperature management plan, Keswick Dam releases in July would be 7500 cfs, and the storage in Lake Shasta was projected to be 1.25 million acre-feet of water,” Jennings observed. “The reality is that, right now, the Bureau of Reclamation is releasing 9600 cfs out of Keswick Dam and projected storage is now only 1.1 million acre-feet of water. But at Wilkins Slough, above the Sacramento River’s confluence with the Feather, flows are now 4500 cfs, so 5000 cfs are disappearing on the Sacramento between Keswick Dam and Wilkins Slough. The difference is being diverted from the river.”

He added, “The bottom line is we’re going to run out of cold water in Lake Shasta and temperatures will be too warm for salmon to survive. Another dry or critically dry year will take California into uncharted territory.”

Most recently, on June 30, a coalition of Delta-based groups — Restore the Delta, Little Manila Rising and Save California Salmon — sent a formal Petition for Reconsideration to the State Water Board. It opposed the Board’s June 1 order to relax water quality standards for Delta operations of the Central Valley Project and the State Water Project.

The coalition’s petition reveals that 4.5 million acre-feet of water will be delivered to state and federal water contractors (including about 10 percent for Central Valley wildlife refuges), based on Water Board information. The Board’s action will only add another 3% in water savings to put toward protecting salmon and the Delta. The petitioners called this “a miserly allocation.”

The water management decisions by the Department of Water Resources and the Bureau of Reclamation have reportedly exacerbated drought water conditions, resulting in the deaths of many winter-run Chinook salmon below Keswick Dam before spawning this year.

In 8 out of the past 10 years, the combined water exports from the state and federal water projects have exceeded the 3 million-acre-feet annual export figure that many believe is the maximum amount of water that can be exported from the Delta without destroying the ecosystem and harming fish species.

In every water year except two – 2014 and 2015 – the state and federal projects exported well over 3 million-acre-feet of water from the Delta. The 3-million-acre feet cap of water exports, in all years, is a key recommendation of the Environmental Water Caucus updated solutions plan titled “A Sustainable Water Plan for California.”

Conservationists stress these exports have a role in projected poor water conditions in the Sacramento River and its tributaries this year, now threatening the juvenile Chinook salmon’s survival.

“If you don’t conserve enough water to maintain carryover storage to enable successful spawning and outmigration of salmon in a drought, then the CDFW has to truck the fish downriver to the bay so that fish are able to survive,” Jennings said.

Be the first to comment on "Devastating: Officials say ‘nearly all’ young Sacramento River winter Chinook salmon could perish this year"