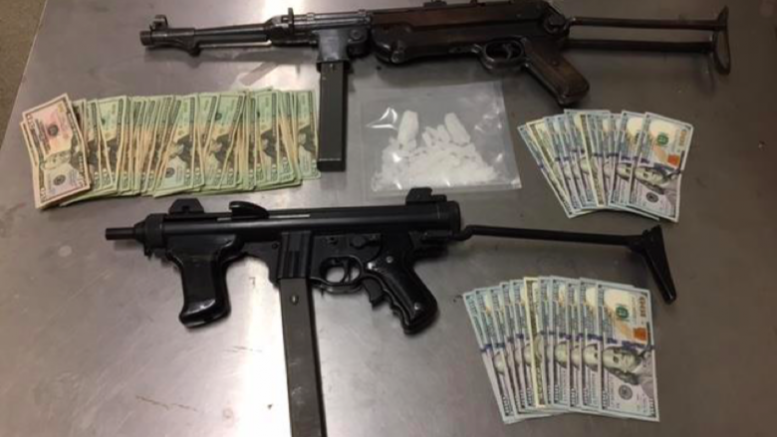 The Sacramento County Probation Department shows seized submachine guns and more than $3,800 in cash that was seized from a probationer's home in June 2018.

According to newly released statistics from the California Department of Justice, law enforcement agencies in Sacramento County led all other counties in the state when it came to civil seizures last year. Sacramento County pursued the most asset forfeiture cases and reaped the largest financial benefit from the assets seized in 2019, with 666 cases initiated and nearly $7.1 million worth of real estate, property and cash taken.

Under state code, law enforcement agencies get to keep 65% of the value of the stuff they take.

Sacramento has topped all other counties in the number of cases initiated since 2016, which was the last time it claimed the biggest dollar value from seized assets. 2016 was the year the Legislature required law enforcement agencies to first obtain a conviction before seizing individual assets worth less than $40,000. Senate Bill 443 also required prosecutors to prove that any real estate, vehicles or watercraft relate to the actual crime before they can be confiscated.

“Police shouldn’t be able to ‘sweep and keep’ your private property simply by saying they suspect a crime connection,” state Sen. Holly J. Mitchell of Los Angeles, who sponsored SB 443, said in a statement at the time the bill passed the Legislature. “This law won’t protect the drug lords that police say they’re after but will cut down on the number of folks in poor, Black and Brown neighborhoods subject to ‘confiscation without conviction.'”

The law closed a loophole local law enforcement had been able to exploit in cahoots with federal agencies, which allowed local agencies to confiscate nearly $700 million in private assets between 2000 and 2013 without indictments or warrants. The state’s law has worked to drastically reduce the amount that California law enforcement agencies get from the federal Assets Forfeiture Fund, The Mercury News reported.

According to the U.S. Justice Department’s most recent reports to Congress, California law enforcement agencies received $41.3 million in cash and sales proceeds through the program last year, less than 15% of the $283.1 million they contributed to the fund through civil seizures.

But despite—or because of—the shrinking federal share and California’s tougher requirements, Sacramento County law enforcement agencies have only increased their profit margins from non-federal seizures, even as asset forfeiture revenues have dropped statewide.

State code divvies up the proceeds so that state and local law enforcement agencies get to keep 65% of what they seize, with 24% going to the general fund, 10% to prosecutors and 1% to charities.

Two counties that Sacramento routinely trades top positions with placed distant seconds last year. Los Angeles County was second in the number of cases initiated at 221, while Alameda County came in second in the value of seized assets at $4.7 million.

From 2014 through 2019, law enforcement has initiated 3,034 asset forfeiture cases in Sacramento County, 1,980 in Los Angeles County and 1,595 in Alameda County. In that same five-year time span, authorities have seized approximately $33.6 million worth of assets in L.A. County, $33.1 million in Sacramento County and $26.4 million in Alameda County.

2 Comments on "Sacramento County cops are No. 1 in seizing personal assets"