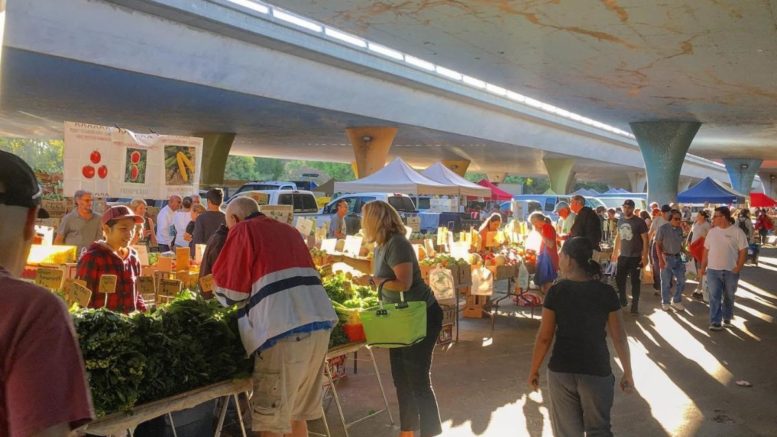 Sacramentans used to walking or biking to the Sunday Farmers' Market will have a much longer commute as the much-loved weekly event temporarily moves to Arden Fair mall. (Photo courtesy of Dan Best)

Visitors to Sacramento’s X Street Farmers’ Market face a longer commute beginning in March as the Sunday staple temporarily moves to the parking lot behind Sears at Arden Fair mall as construction on Highway 50 uproots the weekly event for as long as 10 months.

The last market at the usual location will take place Feb. 28, and the market will take three weeks off to regroup before sprouting at its new spot on March 21. The hours will stay the same: 8 a.m. to noon.

The year-round market hosts as many as 90 vendors in its warmer months, and can draw an average of 400 customers at any one time each Sunday. It’s a staple of many Sacramentans’ Sunday routines. Market coordinator Dan Best hopes to see those customers follow the market to its new temporary home.

“There’s farmers [and customers]  want to see their favorites. It’s become quite a congregation of people and a routine of their lives,” Best says. “It’s part of the fabric of Sacramento County.”

Best concedes that the move to a parking lot far from the city center—with the Sears adjacent to the market’s new home slated to close in April—is not ideal, but the logistics of running a market of that size are significant.

“Safety was our number one concern with the complexity of operating a successful and practical Farmers’ Market in a feasible location, [and it] was becoming impossible. But we’re very happy to have landed and got owners and management over at the Arden Fair have been very supportive,” says Best, who refers to the Sunday market as “a beautiful, healthy monster.”

The complexities of the market move include housing the average of 40 vendors who attend in the slower winter months, landscaping concerns as those dozens of vendor vehicles move in and out of the appointed space weekly and the limited amount of parking within other areas of the city, even if normally metered spots are free on Sundays.

Best said he hopes this construction-necessitated move ends as quickly as possible.

“We want this to be as quick a temporary period as possible because we want to bring it back to its most purposeful habitat location, the reason that we established it in 1980 in the first place.”

Stop and smell the roses