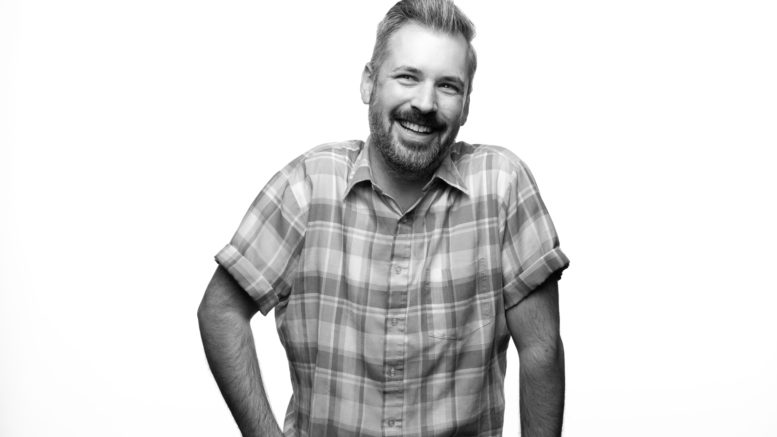 Benjamin Della Rosa has left his mark across the city, but not all of his work even has his name on it. (Photo courtesy of Jess Vincent)

Benjamin Della Rosa has spent more than a decade creating designs for Sacramento entrepreneurs. Now he’s designing for himself

“I loved cross-stitching as a kid,” says Benjamin Della Rosa. “I would pause a video game—and since video games are pixel based—I would trace it with graph paper and then I would turn that into cross-stitch pieces.”

He didn’t stick to his cross-stitching passion for long. He only spent the tail end of elementary school experimenting, but for Della Rosa the hobby represents his burgeoning interest in creativity.

“I was always doing weird arts and crafts stuff like that,” he said. “Even to this day I won’t necessarily stick with one medium.”

He isn’t known to Sacramento as a cross-stitch master, but perhaps he’s better for it. Della Rosa has left his mark designing Verge’s Sac Open Studios guidebook and logos for Camelia Coffee Roasters and Andis Wine and has also worked with restaurants such as Tiger, Empress Tavern and Mother.

Despite his accomplishments, there was a time when Della Rosa wasn’t even sure what design was.

“It wasn’t until junior, senior year that I started getting exposed to fine art. Then, when I found out about Pop Art, like Roy Lichtenstein and Andy Warhol,” Della Rosa said. “It’s just like, ‘These are my guys.’”

One of his teachers at North Salinas High School noticed his interest in graphic design and pushed him to study the subject in college.

“I would be really arrogant and not a very good designer if I thought that I had all of the answers. The client has a whole half of the equation that I need to solve the problem.”

Della Rosa was intrigued and soon began attending classes at a local junior college, where he realized how little he understood graphic design.

“I had such a myopic view,” Della Rosa said. “Graphic art is everything. All forms of visual communication is designed. So with that realization, I was like, ‘Oh man, like sky’s the limit. I can do really whatever I want.’”

In 2004, Della Rosa’s study brought him to Sacramento State’s design department. There he met, Kyle Marks, Hans Bennewitz and John Forrest, and together they formed Interval Press four years after Della Rosa arrived in Sacramento.

“We we’re trying to figure out what to do, so we went back to Sac State and met with one of our former professors, Gwen Amos,” he said. “She’s like, ‘I don’t have a magic answer for you guys. Just do something, find something that you enjoy doing, that keeps you motivated, and just start doing it.’”

Interval Press has fallen dormant recently, but while operating the print company Della Rosa found success freelancing for companies across Sacramento. At the same time, he learned more about what he could accomplish through graphic design, and also what he couldn’t.

“I would be really arrogant and not a very good designer if I thought that I had all of the answers. The client has a whole half of the equation that I need to solve the problem,” he said.

For Della Rosa, solving problems is the designer’s ultimate job: To identify a client’s needs and communicate the solutions visually. For Tiger Restaurant and Bar, that meant translating the mantra “filthy gorgeous” onto their menus. For Camellia Coffee Roasters, it was promoting a non-pretentious coffee.

While he says he finds satisfaction in working for clients, Della Rosa has been wanting to focus more on his personal work.

“It’s easier to work with a client than to be your own client. That’s not to say that I don’t enjoy making my own stuff, I really do,” Della Rosa said. “I just have significantly more experience bringing somebody else’s vision to life than bringing my own vision to life.”

Recently, Della Rosa began to design art works for his personal website, including 25 hand-painted cartoonish statuettes called Wallflower. He says the work is his first attempt at working in a three-dimensional medium and at communicating for himself.

“The statuette is the first time that I put a significant amount of time into something that I want to say as somebody who is a very shy, introverted person who often feels like they are on the outside looking in,” Della Rosa said. “That’s kind of what the inspiration for the piece was.”

Della Rosa has made his career as a designer in Sacramento, but if you called him an artist, he wouldn’t bat an eye. For him, it’s all just, visual communication.

“Artists have always had a social or philosophical idea or thought that they’re communicating visually,” he said. “There may be more artistically inclined designers out there, but at the end of the day, you’re still creating something that did not exist the day before.”

1 Comment on "Heart to Art with Benjamin Della Rosa"