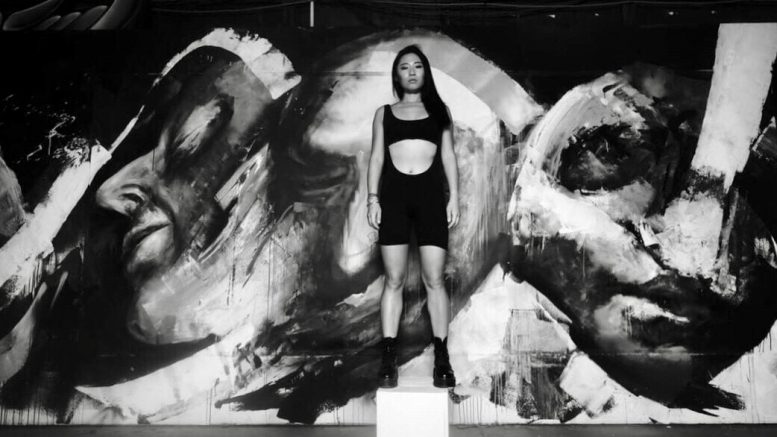 Artist Lin Fei Fei stands in front of her exhibition The Distance Between Black and White at Dwellpoint gallery in Sacramento. (Photo courtesy of Lin Fei Fei)

Lin Fei Fei’s latest project, Introspection, is taking the artist around the world in search of universal truths about the human condition

“I’m really interested in studying human conditions and especially human psyche,” says artist Lin Fei Fei. “Showing our faces is like a way to express ourselves, and a way to study the world of our emotions.”

Fei’s work is dominated by the human face. Her attention to its intricate structure is evident in her latest project, Introspection, a ten-part series of murals that ask the viewer to “stop, look deep within themselves, examine their thoughts and feelings, and re-evaluate what is important in life.”

The first in the series appeared in Mexico City, depicting several monochromatic androgynous faces in moments of reflection. She painted the second in the series in her hometown of Sacramento. Two large faces dominate two separate walls, both looking down on the sidewalk that passes beneath.

In the coming months, Fei plans to visit New York City, Denver and Guadalajara for the next murals in her Introspection series.

“Before the COVID I was planning to travel this year to different cities and do art, but most of all of my travel plans were cancelled,” she said.

The pandemic affected her personally as well. During a February visit to her parents in China, her month-long trip was cut short after just two weeks of quarantine. Upon her return, she had to prematurely shut down her exhibition The Distance Between Black and White at Dwellpoint gallery in Sacramento.

“Everybody was freaking out, and at the beginning it was a kind of challenge for me because I am from China. I’m Asian, so I felt really uncomfortable,” she said. “When I come back to America and people are freaking out, I even received some very unfriendly messages, you know? So there was all of this stress.”

“I’m studying universal emotions, human emotions. Even if I went to different cultures or different countries, the people are people and they all have the same structure underneath.”

Fei has always searched for something universal in the human condition through her work. When she began painting at six years old in a rural part of China, she says she was isolated. “I grew up in the countryside, and that time I didn’t have access to know what was happening in the rest of the world,” she said.

Fei got the opportunity through scholarships to study art in Europe, an eye-opening experience that guided her towards her search for universal truths in art.

“The moment I stepped on the grounds of Italy, I still remember the first time, it gave me goosebumps,” she said. “I felt like my dream just came true.”

While in Italy, Fei saw the works of Michelangelo, Raphael and other Renaissance masters. She says that she wants her art to impact people in the same way she was impacted seeing their work.

“Michelangelo is from the 14th century, but he’s still influenced generation and generations and made this world a great place and a better place. I feel like this is what I’m looking for,” she said. “Everybody has to face death that I hope at the end of my life, I can leave something behind to inspire a lot of people.”

Fei studied at the Luxun Academy of Fine Arts in China and continued to travel the world, which allowed her to experience a variety of cultures and environments.

“I’m studying universal emotions, human emotions,” Fei said. “Even if I went to different cultures or different countries, the people are people and they all have the same structure underneath.”

Fei paints faces in monochrome and doesn’t use references so that people can see themselves in the work. “It could be anybody,” she said. “I just want to show people what could be.”

Fei saw the impact of her work when an elderly Native American neighbor in a wheelchair approached while she was painting a mural.

“She said, ‘I see this face, I see this is me because I found peace. I found love, I found possibilities.’ It just made me feel so powerful,” Fei said. “Some people come and say it’s really sad and makes them cry… I think it’s also a reflection of themselves, you know. It all depends where you’re at and what you want to see.”

“Everybody has to face death that I hope at the end of my life, I can leave something behind to inspire a lot of people.”

She says that she pushes herself constantly to create work, a competitive habit from growing up in China.

“The whole country moves so fast and every day you had to be in a new kind of panic and anxiety situation. If I’m lazy for one second, somebody was going to replace me,” Fei said. “I think it’s good I moved away from my hometown, where the life speed is kind of slower, so I have the time and space to think things through and create something meaningful.”

Through Introspection, Fei is continuing to explore her interests, at her own pace.

“I’m still trying to figure out, what’s underneath, like deep inside of us, what we bring to the world,” she said. “The human condition is a subject I want to learn, and I try to use my painting brushes to express on the canvas or walls.”