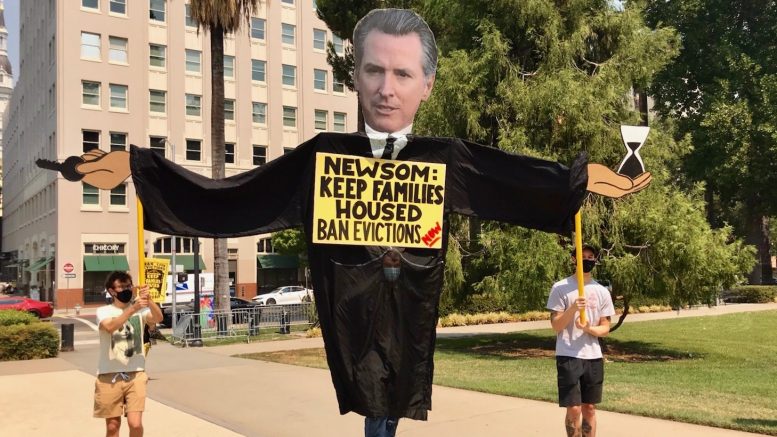 Housing advocates carry a large likeness of Gov. Gavin Newsom holding an hourglass with the sand running out. (Photo by Scott Thomas Anderson)

Fearing that California’s powerful real estate and banking lobbies will stop lawmakers from taking action to prevent an eviction apocalypse that could start Sept. 2, hundreds of struggling tenants tried to argue their way into the state Capitol on Wednesday for an impromptu audience with Gov. Gavin Newsom.

While the renters could not get by security, they pitched tents across the Capitol grounds and stayed to send a clear message to their representatives: Delay all rent payments and offer mortgage assistance to landlords or homelessness will reach a level never seen before—in the middle of a deadly pandemic.

“We’re ready to spend the night if necessary,” said Anya Svanoe, communications director for the Alliance of Californians for Community Empowerment.

For months housing advocates have expressed frustration that Newsom has taken no direct executive action to protect tenants and working families as millions of Californians have been thrown into unemployment through no fault of their own. That’s left renters with only one real champion inside the state house, San Francisco Assemblyman David Chiu. His Assembly Bill 1436 would protect Californians from eviction for non-payment of rent for at least a year after the COVID-19 state of emergency is lifted, as well as protect landlords from losing their properties for falling behind on mortgage payments.

The bill was passed by the Senate Judiciary Committee last week, but has yet to get to a full Senate vote. And time is quickly running out for the bill to become law.

The Legislature is scheduled to adjourn on Aug. 31, though Newsom could call a special session, and the statewide moratorium on evictions ends Sept. 2.

Earlier Wednesday, the Senate suddenly halted its floor session after learning that Sen. Brian Jones of San Diego had tested positive for COVID-19.

Despite the considerations that Chiu put in his bill for small landlords, an individual familiar with the matter told SN&R that real estate and banking interests are lobbying legislators and Newsom to weaken or kill its protections.

An hour after gathering at the north face of the Capitol, frustration among the tenants began boiling over as they repeatedly chanted, “Keep families housed!” About 20 tried to enter the state house, loudly chanting “Let us in!” as security blocked them at the door.

Not long before the drama unfolded, Newsom had acknowledged the ongoing fears of eviction at the end of his daily virtual press conference, conveying a mild note of optimism.

“We’ve been working on evictions very closely with the Legislature,” he said. “There’s a lot of moving parts but there’s been some progress.”

Essay: Unite behind the science

Be the first to comment on "The desperate hour"