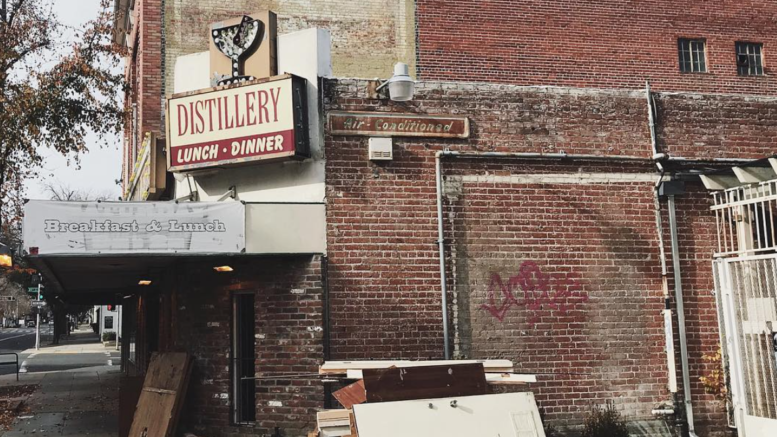 It’s easy to forget that the proliferation of vacant, boarded-up buildings in Sacramento was snowballing long before the COVID-19 pandemic began. In most cases, they’re in neighborhoods where renters and retailers have been priced out, or pushed out to make way for swankier, shinier buildings. At the same time, some business leaders actively court those who can afford those rents by presenting an increasingly cherry-picked version of Sacramento.

An anonymous photographer has been documenting Sacramento’s dilapidated properties on Instagram as @sacramentoisdead since 2016, juxtaposing those images with the slogans, hash tags, and branding that paint a cheerier city than most of us see.

Sacramento Is Dead collected a selection of those images in an eponymous limited-run 2019 zine, accompanied by an alternate, dystopic text, with the phrase “No one lives here” as refrain.

With Volume I nearly sold out, Sacramento Is Dead raised the price (sound familiar?) of the remaining five issues to $10,000 each: half to the artist and half divided between five Sacramento nonprofits: Loaves & Fishes’ Mustard Seed School, 916 Ink, Sacramento Steps Forward, Sacramento LGBT Center and the Washington Neighborhood Center.

Volume II is now available, with a fictional flashback taking the reader before Volume I: Sacramento leadership’s tries to curry favor with a pharaoh, unimpressed by arenas and Ferris wheels. As the city’s human population dwindles, cats take over, leaving most other wildlife to sleep in dumpsters and forage for scraps.

Sacramento Is Dead’s photographer and author remains anonymous but consented to an interview to elaborate on their work, their hope for the city and their still-standing offer for sales of Vol. I.

Yes, but only kind of. Parts of Vol. II were written in response to Vol. I. It felt like a narrative was started with the zine. I’d been placing the #nooneliveshere on photos for awhile and Vol. I seemed to be answering why humans are absent from these photos. I felt like I should keep exploring that. I’d made this dystopian world and I liked it. But the critter story and the pharaoh story never felt like they were enough to exist alone, even though they felt of the same world as the Vol. I story.

I almost didn’t make Vol. II because they felt insignificant, and I left them unfinished for a long time. Then, the actual world changed. Suddenly, Sacramento was a dystopia like I’d never experienced before—not a vacant one in which the oppression is ignored and swept under the rug, but an active one that is constantly violent, overrun with military and run by people who genuinely don’t give a shit about the people. They were just trying to protect their precious things and control. It also was disinterested in the moment and encouraged citizens to be nonchalant. It motivated a response. But the account has always been a response.

First it was personal. It was a very ‘I hate influencers’ response and being the antithesis. Purposely tagging #visitsacramento on photos of vacant buildings to keep the brand honest. And it continues to grow. As it does, the hope is that the personal reflects a collective, even if it’s a humble collective. The people who follow are all up in my DMs being amazing and sharing stories and sharing their frustrations and giving me tips and it’s feeling like a community. I hope they feel like the account is theirs—that this is their preferred perspective on Sac versus the one trending on the IG.

You mentioned influencer culture as part of the motivation for SiD. You used the phrase “I hate influencers” in quotes, so I’m reading a tongue-in-cheek oversimplification. Is it disdain, skepticism at what an “influencer” actually has the power to do? Is there such a thing as a selfless influencer?

The influencer was a preliminary target, like how anger is a secondary emotion. As the account continued over several years, it dug a deeper well. It was probably never apparent that the target was influencers, but more about jamming the Visit Sacramento feed with a balanced view of this city. The thirst for hyper-specified content that comes directly from the Greater Sacramento Economic Council and Visit Sacramento tourism bureau and jamming their hash tags with empty buildings to go alongside their farm-to-fork obsession was more the angle.

Influencers can be harmless, but who is exploiting them and for what benefit and how is that exploitation resulting in the hardships of this place? How is this picture of a girl eating ice cream in front of a city-funded mural causing the rent to go up? Who is truly the driver of this content? Who actually caused this place to appear evacuated? It became more about looking at the harm, looking at the absence of us and feeling a loss. It has already felt like this city has died, but that happens in waves for generations and in different ways for individuals. Hopefully, the account is in service to that emotion or stirs some sort of response.

But also people I know would get lost easily walking around the city—not realize where they were because blocks were changing so fast. Be looking for a laundry mat and realize it’s a beer garden now. It has been disorienting to live here. There’s some preservation to the account. That was very apparent from response to the Vol. I show at Timeless Thrills store. People shared stories about specific buildings on display. For some people, it seemed to be a memory jog and a comfort. No matter what I may feel I am doing with the account is irrelevant. It invites response and it’s different for everyone. There’s of the moment anxieties set to a closed picture of Jimboy’s, and for some people it’s just history and memories. I’d rather it continue to be elusive to definition—to a point that I apologize for this interview.

About the shift between your imagined dystopia and the one we’re experiencing now: Do you see resolution? You’ve talked about the community-building aspect of SiD. Community building seems to be the stated goal of many Sacramento influencers—especially individuals who refer to themselves as brands—so are you an influencer?

Community just happened for Sacramento Is Dead. It’s a digital community, though. We aren’t going to band together to kick the pimp off our block so the children can play outside. And “brands” who build community probably won’t do that for you, either. My neighbors have my back at weird hours. Brands are probably only available to you during business hours. My friends will help me move, and have done it a lot because this city is ruthless to the renting class. Sacramento is Dead is not an influencer. It’s just run by someone living here. Someone who gives a shit.

That said, people followed an account that has never given a follow back. It’s been zero since it began. But the response and encouragement and now the collaboration has been a mind blowing development. Three artists contributed to Vol. II, and they were brilliant. Just asking for artists to help elevate Vol. II was scary, but the first three people who responded were the three I worked with, and they each knew the tone without prompt. They each responded with their own vision with little direction, and it is still surreal to me that we made this thing together. I feel like I couldn’t replicate this in another city and have it work or find people who share this perspective. If I have to move, like out of this over-priced state, I don’t think a Wichita is Dead will work.

It’s just as surreal that the account has grown political, beyond the anger about rent prices, with hardly any blow back. The same people who followed because of a photo of The Distillery seem to have stuck around for stories calling out Scott Jones for being a vile turd. When I invited people to write in a store name on a blank sign, or write in a billboard message on a blank billboard seen from the I-5, the creations were hysterical. I posted them all without censorship because I wanted everyone to have a fair shake at blowing off some steam with a fake billboard message. I love the people who follow this account because we seem to be aware that we’re stuck in the same dystopian world. And we have a funny way of coping with that.

I originally contacted you last January after your December post when you made the offer to sell the last copies of V. I for $10,000 each, to be split between you and five Sacramento nonprofits. Has anyone taken you up on it? Do you have a specific buyer—or type of buyer—you think should make the investment?

One person expressed interest. He was potentially coming into some money from a sale or something. He called it a “fuck your money” expenditure, which was hilarious. Who knows maybe it still happens. There’s no preferred buyer. Does art commerce even work like that? Do I dare tell a Sacto Shkreli to fuck off and deny thousands of dollars to local nonprofits? I hope there’s a better message in this practice. The investment is part of the point. Whoever does it is on the hook. I’m sure their accountant will have questions.

So the offer is still on the table, and that guy better act quick if he wants to make a symbolic “fuck your money” purchase before someone beats him to it?

The offer stands—and will stand in perpetuity, unless I stop renewing the web address. Maybe Greta Gerwig will buy one. I hope it happens, though. What a discovery. Zines are worth whatever you say they are. And in the process it will invest in the next generation of people who are just trying to carve a little space to exist in this city.