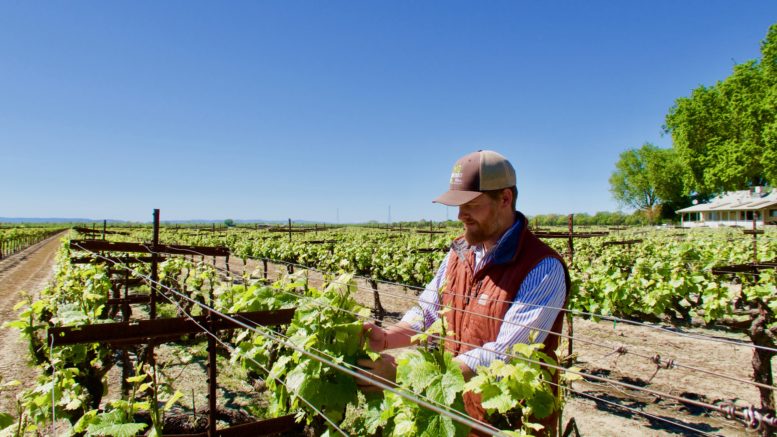 David Ogilvie inspects one of his family’s sprawling vineyards in the Delta. Photo by Scott Thomas Anderson.

There’s a painting on the wall of Scribner Bend Vineyard, an image of the gentle river bow shimmering in the sun just beyond the tasting room’s door. It’s a reproduction of a harvest advertisement from 1906 and it captures how the north Delta looked then, with its long graceful waterways curving under cottonwoods, black walnut trees and levees brushed in wild grape.

Today, when visitors to Scribner Bend move their eyes to the window, they can see that little’s changed in a century around this rural hideaway.

What has evolved is the birth of California’s most unsung wine-tasting trail, one built by farming families who have lived along the Delta’s quiet sloughs and channels for nearly five generations. They pour high-quality vino with a friendly, laid-back approach. And day trip tourism is beginning to explode, especially as more Sacramentans discover the vineyards are only a 15-minute drive away.

But while these small wineries are thriving, their owners fear the trail could shrink or collapse if any version of the massive California WaterFix is built.

Formerly called “the twin tunnels,” the now-single tunnel project could ruin water to the surrounding farms and vineyards, according to independent hydrologists; fatally comprise the Delta’s levee system, according to geotechnical engineers; and choke off nearly all tourism and commerce to the region through massive construction gridlock, according to business owners from Freeport to Isleton who have studied the project’s Environmental Impact Report.

“I want to preserve what we have here,” Scribner says. “If that WaterFix were to ever happen, it would decimate this area. It would absolutely destroy the face of the Delta.”

The pivotal year for Delta wines was 1968. That’s when several longtime families decide to plant grapes in addition to their crops of tomatoes, sugar beets, barely, table greens and pears. Warren and Chris Bogle were the first to take the step, and by 1970 the Wilson and Salman families had followed suit.

At first, these farmers were just helping large-scale wineries in Napa County keep up with their crop demands. Eventually, though, top wine-makers in California began to realize that the Delta’s unique micro-climate produced some of the most interesting grapes on the West Coast, especially for the chenin blanc varietal.

“We have the Delta breeze that cools the region down every evening, but then we’ll have warm days as well, and that helps ripen the fruit and get a lot of those tropical characters into the wine, while the nighttime coolness is still preserving the acidity,” explains David Ogilvie, a fourth-generation Delta dweller and lifelong grape farmer. “That 40-degree shift in temperature really helps the quality of the chenin blanc.”

Ogilvie—along with his brother Phil, sister-in-law Shannon and longtime friend Tom Merwin—own Silt Wine Company in Clarksburg. Its tasting room is set along a lush, tree-lined turn in Babel Slough drenched in vines and wild flowers.

Ogilvie says even wine magnates from Napa and Sonoma express envy over the oasis-like atmosphere when they visit. His grandfather, David Wilson, was the first Delta farmer after Warren Bogle to plant grapes. His great-grandfather had been farming the land since 1921. David would like to see his own children and grandchildren have a chance to carry on the tradition, though he worries WaterFix—which has more than 30 active lawsuits pending against it—could kill that hope.

“Even with a one-tunnel project, if we just look at what it would do to the Delta—the construction side things, the number of trucks using these levee roads built of sand and silt—that’s pretty scary,” Ogilvie says.

He’s not the only one who’s concerned.

Joe and Lenaya Salman recently opened a spacious, stately tasting room on Grand Island, just a few miles north of the famous Grand Island Mansion on Sutter Slough. Joe’s grandfather, Mujiko Salman, immigrated to the Delta from Croatia shortly after World War I. Farming in the breezy, Mediterranean climate was a natural fit for Mujiko, and by 1970 his son was planting grapes on their ranch, including the petite sirah, another attention-grabbing, standout varietal for the Delta.

Three years ago, the Salmans built their tasting room to have panoramic views of swaying trees and the bloom on the pear orchards. So far, visitors have been enthusiastic, though Joe continues to fret about what WaterFix would do to his crop irrigation. He also worries many Californians don’t know what kind of setting is at stake.

“If people don’t come out to the area, they probably just see it as a blank place on the map,” Joe says. “We want to be part of getting the word out about his area that’s just so beautiful, and that a lot of people still don’t even know about it.”

A ‘som’ behind the barrels

Be the first to comment on "Uncorked potential: Delta wineries are flourishing, though tunnel project could change that"