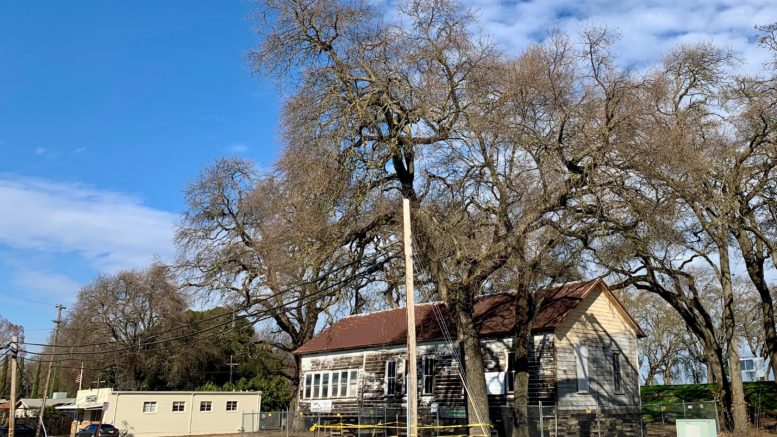 Towns along the Sacramento River with SMUD got power back quickly, while Clarksburg’s connection to PG&E left it in COVID-era limbo

Last week, residents of Clarksburg learned a hard lesson that hundreds of thousands of others in the Sacramento region came to understand in 2019: Sometimes, a community’s fate depends on whether its power comes from SMUD or PG&E.

The companies’ disparity in service was on full display after a severe winter storm wreaked havoc across the Delta on Jan. 26, downing numerous trees and power lines. Nearly the entire estuary went dark.

The towns of Hood, Courtland, Locke and Walnut Grove—all in Sacramento County and serviced by SMUD—had their power restored within the 24 to 36 hours.

But some 83 homes in the nearby town of Clarksburg—connected to PG&E’s power grid on the Yolo County side of the Sacramento River—did not get power back for five-and-a-half days. For a town with a large number of elderly residents whose water comes entirely from electric wells, and who were sheltering at home from the pandemic as their food rotted, the prolonged outage caused numerous problems and concerns.

“We really didn’t know what happened,” said Clarksburg resident and community volunteer Barbara Daly. “We have lived here 30 years, now, and the power has never been out for much more than 24 hours at the most.”

The full picture of the seriousness of the outage only came into focus as the week progressed. Those who still had cellphone reception say that they received vague messages from PG&E stating how many customers were dark—a number that kept changing—but no estimate of when power would return. Residents also began to notice that utility repair trucks driving around Clarksburg weren’t the signature blue vehicles with PG&E’s logo, but white trucks with insignias they’d never seen before.

Anna Swenson, secretary of Clarksburg’s Rotary Club, pulled over to speak to one of the repairmen. She said he told her that the crew were contractors from Fresno hired by PG&E who had never worked in the Delta’s elaborate patchwork of sloughs and islands before.

“They sent people who had no familiarly with the area,” Swenson told SN&R.

Two days into the outage, PG&E spokeswoman Megan McFarland told reporters that Yolo County had been hit especially hard by storm damage, including in Davis and Woodland, and that the utility had hundreds of repair personnel working on different outages. McFarland also said that PG&E had “pulled in crews from less impacted areas and brought them up to the Sacramento region to help with restoration efforts,” and had also activated mutual aid agreements to bring in repair workers from other utilities.

By Clarksburg’s third day without power, serious issues were emerging. It was still cold, windy and rainy—especially at night—and many of its 450 residents had no indoor heat or running water.

“We were freezing,” Daly recalled. “It was 50 degrees in our house and our hands were numb, and you couldn’t warm up with hot food.”

Daly said that she and others in Clarksburg had no idea that by then, the neighboring towns in the north Delta had their power restored by SMUD.

People in town without generators were soon forced to throw all of their food away. Between the low temperatures, food scarcity, sanitation challenges and the lack of phone and internet service, residents grew increasingly worried about the elderly, particularly those living alone or in the rural outskirts of places such as Sutter Island. If a senior’s medical equipment wasn’t working, or if they were completely out of water or having trouble staying warm, there was no way to call for assistance.

“There was a lot of concern about the elderly residents, given that their food was spoiling and they’d lost their water and most of them had already been really shut-in for a while because of COVID,” Swenson said. “It was very hard, and it just got worse as the outage went on and on.”

Swenson and other volunteers eventually did in-person welfare checks on Clarksburg-area seniors. That brought its own fear of accidentally spreading COVID-19 to some of the community’s most at-risk individuals.

“Obviously we were wearing masks and socially distancing, but you’re still having to go knock on someone’s door, and be at the front of their house,” Swenson explained. “And you’re doing that at a time when it’s hard for everyone involved to keep their hands clean because there’s no water.”

A warm place and food

By Friday, Jan. 29, the fourth day of the outage, the community church had been opened as a warming center and the Yolo County Food Bank sent a truck loaded with supplies and parked it at the fire station for distribution. Delta High School used its alert system to try to get the word out about the shelter and food.

Swenson also points out that Clarksburg’s children, who are distance learning during the pandemic, lost three full days of school due to the outage.

PG&E spokeswoman McFarland told SN&R that the majority of households in the Clarksburg area had power restored within a few hours of the Jan. 26 storm, but that the 83 households that remained dark for nearly six full days did so because of a variety of repair challenges and further damage from storms that continued through the week.

She did not comment on why the Delta towns serviced by SMUD—several only a 15 minutes by car from Clarksburg—had their power fully restored far sooner than PG&E’s other customers in the area.

This isn’t the first time a stark contrast is being drawn between SMUD and PG&E during extreme weather.

In the fall of 2019, high winds and dry conditions prompted PG&E to begin broadly using its then-new Public Safety Power Shutoff program. During one outage in October 2019, hundreds of thousands of PG&E customers in Yolo, Placer, Nevada and Amador counties were left without power for five days, while SMUD households in Sacramento County never lost power. Though SMUD doesn’t directly service the area that’s in the California Public Utilities Commission’s fire threat map, SMUD does have power lines and receivers that transmit electricity from its hydroelectric plants through the Sierra Nevada—the same area where PG&E was shutting its own lines down. A SMUD spokesperson said at that the time the utility didn’t need to shut off its transmissions in the Sierra off because its infrastructure was built to withstand the winds.

PG&E spent the first half of 2020 making large-scale improvements to its infrastructure, which resulted in fewer and less disruptive safety shutoffs than the year before.

That was little consolation, however, to Clarksburg residents who spent nearly six full days without power from storm damage.

“People not familiar with the area might not realize that we have a lot of country out here,” Daly said, “and this created a very unhealthy situation across it. Shame on PG&E.”

City says it can clear homeless camps during COVID

Be the first to comment on "After the storm, a week-long public health ordeal awaited PG&E customers in the Delta"