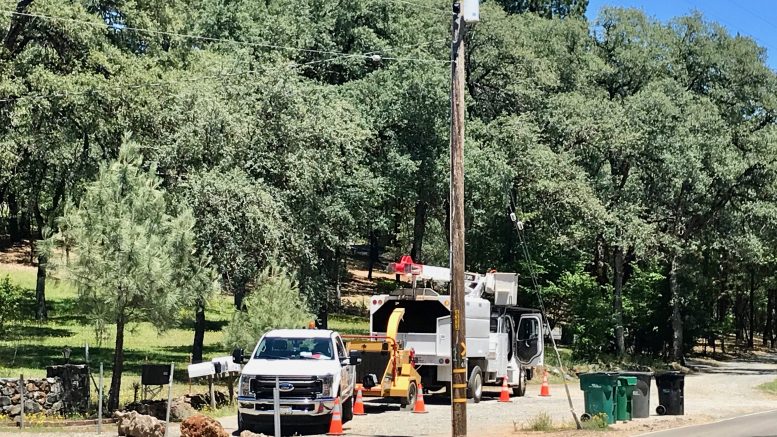 Crews from Mountain Enterprises, which is contracted through PG&E, cut back tree branches from power lines in the foothills east of Sacramento. (Photo by Scott Thomas Anderson)

While economists are trying to determine just how stark the new COVID-19 reality is for mom-and-pop businesses, a recent survey by the U.S. Chamber of Commerce suggests the situation hasn’t hit rock bottom yet: 43% of small business owners said they are three to six months away from shutting their doors forever.

The irony for businesses around California’s capital—at least the ones who don’t get their power from Sacramento Municipal Utility District—is that they spent 2019 adjusting to a different reality: Widespread and repeated power outages intentionally triggered by Pacific Gas & Electric Co. to stop its equipment from sparking wildfires.

Businesses in El Dorado, Placer, Yolo, Nevada, Butte and Amador counties collectively lost millions of dollars during days in the dark. Shops and restaurants across the patchwork of Delta counties were impacted, too.

The financial losses from PG&E’s Public Safety Power Shutoff program came from businesses closing up for a few days, several times between June and November. The monetary havoc from California’s months-long stay-at-home order has been far greater and, for some longtime storefronts, permanent.

Now, as community entrepreneurs adjust to the guidelines for “a new normal” as they reopen, some wonder if having the lights turned out this summer will be the final straw.

PG&E has spent moths implementing a new plan designed to limit the size, scope and frequency of power shutoffs. Its strategy relies on a combination of technological innovations and old-fashioned boots on the ground. But business owners from Pollock Pines to Lake Berryessa are still wondering, “Will it be enough?”

From one unimaginable blow to another

PG&E created its PSPS program after facing a torrent of lawsuits over wildfires that its faulty equipment caused in 2017 and 2018, including the Camp Fire that blackened Paradise. On June 16, PG&E pleaded guilty to 84 counts of involuntary manslaughter for the Camp Fire deaths. The utility has been implicated in at least 22 other deaths and 5,000 lost structures.

The California Public Utilities Commission granted PG&E permission to use power shutoffs to protect communities when extreme weather conditions presented risks for fire, though its commissioners later suggested they were stunned by the scale at which PG&E shut down vast sections of California’s infrastructure.

Some small business owners threatened to move out of the state. Others told reporters they simply couldn’t keep the doors open if the outages continued. One place where businesses went dark was Solano County, including its enclaves along the Delta.

But Bill Wells, executive director of the California Delta Chambers and Visitor’s Bureau, says what businesses have recently faced from the COVID-19 lockdown is far worse than last year’s troubles with PG&E.

“It’s been a complete catastrophe,” Wells said. “At this point, I’m really worried some of these places will never come back.”

That sentiment is shared in the communities east of Sacramento, as well. In late April, hundreds of business owners in Roseville, Rocklin, Lincoln, Loomis and Granite Bay signed a petition to Placer County supervisors asking to reopen with new safety guidelines. In the petition, many reported a 70% to 80% loss in sales since being forced to close. Some of those same businesses lost revenue to last year’s power shutoffs, but not nearly as much and there was never a petition.

“I think the petition gives you a sense of what a struggle it has been,” said Tom Indrieri, executive director of the Lincoln Area Chamber of Commerce.

Business leaders in El Dorado County also draw a sharp distinction between the power shutoffs and the coronavirus lockdown. El Dorado was among the counties to be widely impacted by PG&E’s first power shutoff in late 2018. Its businesses have been affected by nearly every outage since.

Laurel Brent-Bumb, executive director of the county’s chamber of commerce, says as difficult as the PG&E outages were, the unprecedented lockdown has become the main existential threat to business owners. Some, she added, don’t even have the mental bandwidth to worry about what PG&E might do this summer.

A giant tries to move fast

Despite a chorus of calls for PG&E to be converted to a public, nonprofit energy provider, the shareholder-owned corporation is expected to emerge from bankruptcy this year. Among the state’s many requirements for that to happen is for PG&E to have a plan to safeguard communities without simply shutting power off on windy days. The utility has spent months trying to change the fire threat dynamics around its power grid.

One of PG&E’s main tactics to reduce the scope of shutoffs is installing sectionalizing devices to break up the grid into smaller parts and allow for targeting of smaller areas for de-energization. PG&E is now working to install 21 sectionalizing devices in El Dorado County, 20 in Placer County,14 in Nevada County, 11 in Yolo County, 8 in Amador County and four in Butte County.

Another element of its strategy involves advanced weather stations, which PG&E says will allow it to better understand dry, windy conditions unfolding around its equipment in real time. The company faced vehement criticism last year for shutting off power to communities that experienced little to no wind. PG&E is in the process of installing 33 advanced weather stations in Butte County, 30 in El Dorado County, 16 in Amador County, 15 in Nevada County, 5 in Placer County and one in Yolo County.

By now, many living the capital region’s foothills and farmlands have also seen the platoons of tree-trimmers that PG&E is deploying along its power lines. These workers are cutting away any vegetation that could be hurled into the lines by a windstorm. PG&E says that it’s on track to complete this work on 212 line-miles in Butte County, 197 in El Dorado County, 105 in Placer County, and 85 in Nevada County and 80 in Amador County.

Finally, PG&E has installed micro energy grids to keep the central core of some cities and towns operational during a safety shutoff. To date, it’s installed microgrids for Placerville and Grass Valley, and is currently working to install two more for Georgetown and Pollock Pines. PG&E spokeswoman Brandi Merlo said no plans have been finalized for adding microgrids to Placer or Amador counties. That means the main streets of Auburn, Loomis, Nevada City, Jackson and Sutter Creek could all go dark again this summer.

In a statement last week, PG&E vice president Michael Lewis stressed that the “hardening” of the company’s grid will make future power shutoffs “smaller and shorter.”

But for small businesses on the brink of bankruptcy because of the COVID-19 lockdown, outages this summer could mean the difference between making the rent or closing up for good.

Running Lincoln’s chamber of commerce through the pandemic has given Indrieri some hope that South Placer County will cope with wildfire season because of a renewed commitment from residents to shop local.

“The citizens have really rallied behind our businesses,” he said. “In Lincoln, the one place that said it was going to have to close now thinks it can stay open.”

Brent-Bumb has noticed a similar sense of solidarity in El Dorado County, though she hopes it will last, since small businesses will be dealing with the financial fallout from the lockdown for a long time to come. She is also staying hopeful that PG&E’s recent work will be enough to prevent the year of the coronavirus from also being remembered as another summer of power shutoffs.

“We can condemn people for past sins,” she said, “but we can also be thankful for what they’re doing now.”

Be the first to comment on "Can PG&E limit safety power shutoffs enough to save businesses battered by the lockdown?"