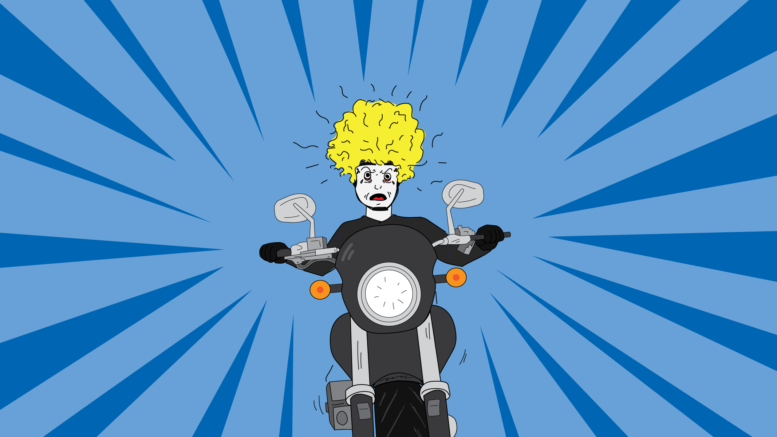 If you really want to honor our military, start by not being a jerk on the road. (Illustration by Rachel Mayfield)

The 326 other people who owe you their lives

Because no one crashed or died, the California Highway Patrol was able to throw some shade on social media at the motorcyclist who didn’t care about other people.

On May 13, a CHP officer assigned to South Sacramento watched the rider of a gray Harley Davidson dart between two cars at an insanely high speed and then gun it to 105 mph. After he was stopped on the side of Highway 99, the rider reportedly told the ticket-writing CHP officer he was was late for a haircut in Rocklin.

“???? Not sure how he got that appointment and who is cutting his hair during shelter in place, but that is one expensive haircut,” the South Sac CHP unit snarked on Facebook.

Inconsiderate coronavirus skeptics notwithstanding, the rest of you are saving a lot more lives than you think by staying home during the pandemic. According to the CHP, the numbers of vehicle crashes and fatalities have plummeted since we all went into socially responsible isolation.

The preliminary figures come from the CHP’s Statewide Integrated Traffic Records System, which compared accident data between March 19 and April 30 to the same period a year ago. And the benefits of fewer drivers on the state’s highways and local roads are indisputable.

Let’s start with the number of traffic deaths, which dropped an incredible 88% compared to a year ago. A total of 43 people have lost their lives in vehicle accidents this year, most of those in highway crashes. And while each of those deaths represents its own ripple-out tragedy, the total figure represents a sharp drop from the 369 lives lost 12 months earlier.

In short, that’s more than 300 people who wouldn’t otherwise get to experience this surreal holiday weekend, which is also the subject of a maximum enforcement effort that ends at midnight Monday.

Similarly, the six-week period that the CHP examined saw a 79% dive in injury accidents, a 71% drop in accidents resulting in property damage and a 75% decrease in all vehicle accidents, which numbered 13,554 in the quarantine period ending April 30, compared to more than 53,000 last year.

As a reminder, California directed all residents to stay home and restrict themselves to only essential travel to stem the spread of COVID-19 on March 19. And while Gov. Gavin Newsom has issued repeated kudos to the public for bending the curve, CHP Commissioner Warren Stanley says there’s even more credit to go around.

“People are adhering to the order, eliminating non-essential travel, and as a result, there has been a significant reduction in the number of commuters on the highways,” Stanley said in a statement released by the CHP.

That has also contributed to the CHP making 42% fewer arrests for driving under the influence—4,223 in the recent six-week period and 7,224 arrests over the same period in 2019.

Of course, it’s not all good news.

Arrests for excessive speeding are way, way, way up, and the CHP believes that pandemic-cleared streets are tempting some motorists to test the sound barrier. CHP officers issued 4,000 citations for speeding in excess of 100 mph between March 19 and April 30, a 113% increase from the same period last year.

But overall, these preliminary crash figures feel like a needed reminder that most people are decent and responsible, and that the CHP is on high alert for the small percentage of selfish jerks such as Harley Haircut.

“Drivers are easier to spot when they are on a nearly empty roadway,” Stanley noted. “Remember, taking care of one another goes beyond wearing a face covering and physical distancing.”

While Reopen California’s me-me-me members may not embrace that message, saving lives by sacrificing a little comfort sounds like a pretty fitting way to honor the ultimate sacrifice of our service members.

Be the first to comment on "Stat of the week: Memorial Day edition"