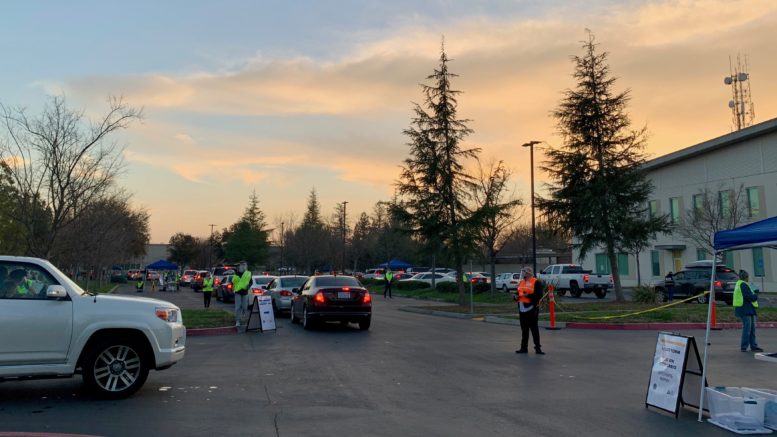 Isolated seniors and farm workers have priority, but reaching them won’t be easy

Drive-through and walk-up vaccination clinics are popping up across the Capital Region as public health professionals try to turn the tide on COVID-19. They want to shift as soon as possible from focusing on medical workers and nursing home staff and residents to older Californians in general, then to first responders, educators and food and agricultural workers.

As of this week, Kaiser Permanente and Sutter Health had worked fast enough to reach one of those goals, getting permission from the state to begin vaccinating patients who are 65 or older, according to multiple county officials.

But as the unprecedented coalition of public and private health workers tackle the full magnitude of vaccinations in the coming weeks, some are having to plan for the challenges of reaching the most rural parts of the region, especially farm workers and isolated seniors.

As of Tuesday, the state says 889,042 vaccine doses had been administered statewide of the nearly 2.9 million it has received, or about 31%.

With Southern California virtually crippled by its coronavirus epidemic, critics argue that the state’s priorities and planning have been costly.

On Monday, Newsom announced a goal to administer 1 million more doses by the end of this week. Cal Expo in Sacramento, Disneyland in Anaheim, Dodger Stadium in Los Angeles and Petco Park in San Diego are being converted into mass vaccination sites.

On Tuesday, California Health and Human Services Secretary Mark Ghaly defended the state’s approach, saying it had put a “thoughtful focus” on “risk, and exposure and equity,” though he acknowledged this tactic led to delays in getting vaccine out.

There have been more than 7,660 COVID-19 deaths in California since mid-December, when the vaccine first arrived. Total deaths statewide have passed 31,000.

One point of confusion involves why some counties are moving faster than others with their vaccination efforts. A big reason is that vaccine allocations are given to two different groups—county public health offices, who set up their own clinics, and private health systems, who use their larger hospital settings. South Placer County and parts of Sacramento County have more hospital help.

As of early this week, Sacramento County had received nearly 45,000 doses, with 16,350 of them going to county Public Health, which said it had administered more than 15,000 of its allotment.

County health officers and hospital administrators across the region are adapting and problem-solving in real time, which means planning for getting the vaccine to rural areas.

One of Yolo County’s big concerns involves the thousands of people who work on its sprawling farms and vineyards, many in the north and west parts of the county far from its population centers.

If farm workers and seniors living in those areas are already regular patients of Kaiser, Sutter, Dignity Health or UC Davis Medical Center, then notifying them that it’s time to get vaccinated is easier. But for ag workers and seniors who are under-insured or uninsured—though the shots will be free—outreach could be difficult.

Yolo County Public Health Officer Aimee Sisson told SN&R that her agency will work closely with the county agricultural department and the leaders of its farming communities to get the word out. On Wednesday, her department coordinated several drive-through vaccination clinics for health care workers and long-term care residents and employees—Yolo still has several thousand shots to give in that category—but she knows that might not work for some agricultural workers.

“It could be the case that some of them don’t have reliable transportation, so they may not have a way to get from the more rural parts of the county to a centralized vaccination location,” Sisson said. “Rather than just planning for a drive-through site in Woodland, we might also have to do a smaller, walk-up clinic in a place like Madison.”

Madison, located in the farmlands north of Winters, has a population of less than 600.

“The challenges with our rural residents haven’t come yet,” Sisson said, “but that’s because we still have two to three weeks before we get to that part of it.”

The challenge of getting the vaccine to seniors living isolated in remote locales is one faced by Yolo, Placer, El Dorado, Amador and Nevada counties.

Mike Romero, program manager for Placer County Public Health, said the large-scale presence of Kaiser and Sutter in the south part of his county is helping its health department narrow the focus.

“In Placer County, one-third of our residents have Kaiser, so that’s taking a big chunk right there,” Romero said.

Romero’s department is still in the first phase of vaccinations, partly because Placer County has more than 100 senior care facilities. The department has been administering its allotted dosages through a walk-up clinic in the Roseville-Rocklin area and eight Safeway pharmacies across the county, including in the high Sierra community of Kings Beach near Lake Tahoe. It is planning to quickly expand that program to seven Wal-Mart pharmacies.

“So far, the pharmacy system has been administering 60 doses a day, five days a week,” Romero said. “It’s not a huge number in the grand scheme of things, but it’s spreading vaccinations out geographically.”

An additional challenge, he said, “is that, on any given week, we don’t know what our vaccine allocation is going to be.”

Romero and Sisson agree that a cornerstone to reaching elderly people in rural areas will be nonprofits already embedded in those residents’ lives, such as Seniors First and Meals on Wheels.

“A lot of seniors have at least one type of service provider contacting them on a regular basis,” Sisson said. “This will be a team effort with those kinds of partners.”

She added that messaging through local media will also be important, since some seniors aren’t active on the internet. That could include trying to combat rumors and misinformation about the vaccines.

“Probably the biggest misconception is people thinking they can contract COVID by getting the COVID vaccine,” Sisson said. “The Moderna and Pfizer vaccines don’t have the COVID virus in them, or any active virus for that matter.”

Romero said another important piece of the messaging is an honest acknowledgment that California’s vaccine campaign is fluid and a work-in-progress.

“It’s been a long COVID response and we still have a long way to go, but we have to be patient,” he said. “We’re going to do our best to make it available in any way possible, but we’re in the first mile, and this is a long road.”